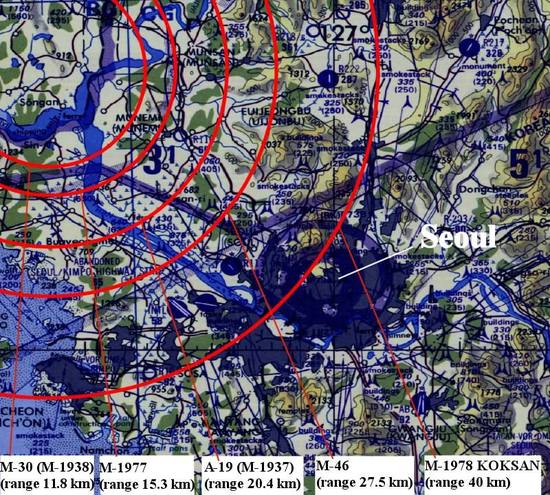 You hear it often: if war in Korea were to break out, Seoul would be flattened. Not because of a nuclear strike, but because of North Korean artillery.  North Korea is estimated to have (depending on the analysis and definitions) 8600-12000 artillery pieces, dug in and defended against a first strike. At one round per minute, they could fire at least five hundred thousand rounds per hour, quickly reducing Seoul to a heap of rubble.

Is this actually the case?  Let’s break it down.

The above map shows the range of various types of North Korean artillery fired from the closest point on the DMZ. It quickly becomes clear that the vast majority of them aren’t actually in range of Seoul itself. Only the M-1978 (since modified to the M-1989) actually is. This is a large, rather unwieldy system with a low rate of fire, one to two rounds per five minutes. North Korea only has around 400-500 of  these systems. Various smaller cities are in range of some of the lesser systems but not densely-packed Seoul itself.

How well can these situations actually hit?  We can look at the best case for North Korean artillery: the attack on Yeonpyeong island. This attack was planned out long in advance, by North Korea’s best troops, and was a preemptive strike on their part. The North Koreans fired 170 rounds. Only 80 even hit the island. Of those, a whole quarter (20) failed to detonate, suggesting quality control or storage problems. The timing of the attacks suggest a well trained artillery corps involved, but with poor equipment. Of the 60 that detonated, the locations hit suggest outdated maps on North Korea’s part.  Four were killed and 19 wounded, primarily due to a lucky hit on a barracks. Only two South Korean guns (of six) were hit.

Next up comes positioning: not all North Korean artillery is positioned at the closest possible point to Seoul. This salient is rather narrow, flat, and an easy target to quickly overrun:

In the event of a preemptive strike, air power — and ground power — would focus heavily on the immediate neutralization of this location. North Korea is well aware of this and has not focused all of their equipment on this location. Additionally, they have a whole border to defend, and other South Korean targets scattered along the border that are more important or easier to hit than random inaccurate hits on Seoul.

The US and South Korea have additionally spent decades working on how to deal with the North Korean artillery threat, whether as a preemptive or responsive strike. Known as OPLAN 5015, all known targets (which extensive effort has been focused on identifying and monitoring) are immediately shelled, while counter-battery radar is used to quickly locate and neutralize undetected targets. While “digging in”, which North Korea has used extensively, offers protection to artillery pieces, modern precision shelling and penetrating munitions have significantly reduced its effectiveness.

Lastly comes the question, how fast can a city actually be flattened by artillery? The world has no shortage of examples to look at.  For example, Russia’s “flattening of Grozny” took months, despite the involvement of large tank and artillery forces. Major cities in Syria have large chunks that can well be described as “flattened”, but it took years to reach this state. The simple fact is that a single shell does not a building take out, and cities sprawl over huge amounts of area.

This has all been working around one key question: can North Korea “flatten Seoul” with artillery? The short answer is “no”.

This is the same conclusion reached by many others when discussing the situation. Ex:

“Artillery is not that lethal,” says Anthony Cordesman, who holds the Arleigh A. Burke Chair in Strategy at the Center for Strategic and International Studies (CSIS), and is a national security analyst for ABC News. “It takes a long time for it to produce the densities of fire to go beyond terrorism and harassment.” Even in a worst-case scenario, where both U.S. and South Korean forces are somehow paralyzed or otherwise engaged, and North Korea fires its 170mm artillery batteries and 240mm rocket launchers with total impunity, the grim reality wouldn't live up to the hype. Buildings would be perforated, fires would inevitably rage and an unknown number of people would die. Seoul would be under siege—but it wouldn't be flattened, destroyed or leveled.

That said, if we deal with the lack of reality of a “flattening by artillery” scenario, we still must deal with some painful realities. A conflict with North Korea will still have large numbers of casualties — particularly on the North Korean side. North Korea will use whatever terror weapons it has, such as chemical weapons and anthrax, to the best of its ability. These weapons do not cause particularly high numbers of casualties relative to the amount of effort that goes into them, but they create fear and panic. The nuclear weapons are real wildcards. North Korea is not believed to have the capability to mount nuclear warheads to rockets, and any incoming ballistic threats have to go through two (possibly three) layers of defense — THAAD, Patriot (PAC-3, very capable) and in some situations AEGIS BMD. Probably of greater concern is of smuggled weapons. A huge amount of effort will be put into preventing this, but it’s always a game of chance. While North Korea’s weapons are low yield, and ground-detonated nuclear weapons not as effective as those detonated in the air, the potential consequences are still horrific.

Regardless, Seoul will survive.  And artillery certainly would not be the end of it. But this potential war would still be horrific. Not least of which, to the North Koreans. If it begins, let us hope that it ends quickly.