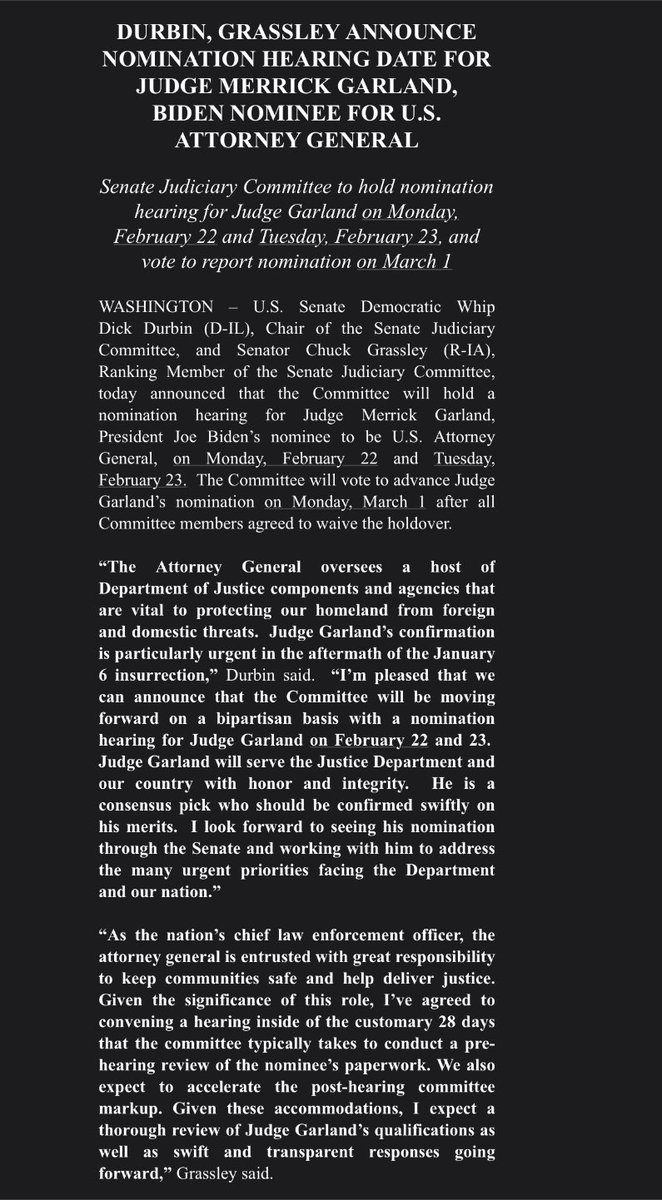 One hopes that after the farce of a Trump impeachment acquittal, that criminal proceedings begin in all of the relevant venues. We have already seen how Trump uses lawfare delaying tactics with even less aplomb than Mitch McConnell. We can also be assured that within the year, the numerous right-wing militants will create another idiotic crisis not unlike the Bundy standoff or its offshoot, the Malheur siege. Delaying the appointment of Merrick Garland as AG has reached its end.

Pleased to announce a bipartisan agreement to expedite Merrick Garland’s confirmation as the next Attorney General. After unprecedented Republican obstruction, Judge Garland will finally get the hearing & vote he deserves.

Keeping eyes on the prize: No matter what the Republicans do, Donald J. Trump is only at the beginning of his legal troubles. He can be prosecuted & charged by Merrick Garland, by the state of Georgia, by SDNY & more. He will lead an empire of blood & dirt as his world crumbles.

Good point. Trump already lost them the House, the Senate and the presidency. I don't see how he could make it that much worse.

By all means, GQP, continue falling in behind the disgraced former president. It can't get too much worse, right?

1. Merrick Garland’s confirmation could take another month. 2. Lindsey Graham’s win in the last election is suspect 3. How did he give Trump half a million dollars when he was begging on Fox for money 4. Will we ever know the kompromat on this guy? 5. GA? https://t.co/Fj6L5OPFqO

We aren’t going to take this lightly, and we hope that you won’t either.

This isn’t just a matter of policy and politics.

This is about our self-respect as a state.

New York prosecutors are investigating financial dealings around some of Donald Trump’s signature Manhattan properties, extending the known range of the criminal probe of the former president and his company, according to people familiar with the matter.https://t.co/ZPJDbm3uFS

Nobody on the right will give Biden credit for this but he has gone out of his way not to inflame divisions or denigrate the Trump flag waving insurrectionists during a trial where he had ample opportunity to do so.

Tonally he is living up to his campaign promise https://t.co/loq4wLZhg2

The reality is that Trump has created a dynamic through the Ukraine whistleblower and Ukraine witnesses where his domestic terrorist supporters threaten violence against witnesses against him. This fear is real and it is a huge problem. This should be everyone’s focus.

Trumpist radio host Eric Metaxas made several comparisons between the U.S. and the Third Reich in a new interview, saying his reaction to the treatment of Trump supporters after the Capitol riot was, “Holy cow. What am I, in Nazi Germany?” https://t.co/UTPePe6HWZ

Conservative Christian radio host Eric Metaxas made several comparisons between the United States and the Third Reich in a new interview with The Atlantic, saying his reaction to the treatment of Trump supporters after the Capitol riot was, “Holy cow. What am I, in Nazi Germany?” “This event happens, and before the smoke clears, we are using the opportunity—and I’m not talking about the Biden administration; I’m talking about the Democratic establishment and the media—instantly seizing on it to demonize, in the harshest terms, anyone who would support Trump,” the outspoken Trump ally said. “That just blew my mind.”

No real consequences.
No fundamental changes.

I wish I could implant this into everyone’s brain.

QAnon conspiracy theorist DeAnna Lorraine, who bragged during the insurrection that "American patriots did this. And it's a good thing," is now calling the insurrection a “false flag” operation set up to “trap” Trump supporters. https://t.co/5vCyPY7hSn

For as long as hate groups have used the internet to advance their cause, a loose network of journalists and activists have committed themselves to disrupting them. Devin Burghart, executive director of the Institute for Research and Education on Human Rights who has tracked the Ku Klux Klan and neo-Nazis since the early 1990s, says one of the biggest challenges of this work is keeping up with the far right’s constantly changing tactics, whether by moving to different platforms or devising new ways to recruit members. Today, according to a recent analysis by the Center for Strategic International Studies, far-right extremists “operate and organize to a great extent online, challenging law-enforcement efforts to identify potential attackers,” adding that “right-wing terrorists have used various combinations of Facebook, Twitter, YouTube, Gab, Reddit, 4Chan, 8kun (formerly 8Chan), Endchan, Telegram, Vkontakte, MeWe, Discord, Wire, Twitch, and other online communication platforms.” The need for researchers and infiltrators familiar with all of these platforms, skilled in online surveillance, and fluent in internet culture was greater than ever.

Anti-fascist activists and journalists are far from the only ones working undercover online. The FBI does it, as do state and local law-enforcement agencies. Last fall, the FBI arrested a group of men who dubbed themselves the Wolverine Watchmen and were planning to kidnap Gov. Gretchen Whitmer of Michigan; in a criminal complaint in the case, the feds alleged that they first took notice of two of the group’s leaders on an unnamed social-media platform, where the men had joined a group “discussing the violent overthrow of certain government and law-enforcement components.” Established, well-funded nonprofits such as the Anti-Defamation League and the Southern Poverty Law Center also monitor online hate. Overseas, the London-based Moonshot CVE specializes in tracking online extremism in dozens of languages and staging interventions to prevent people from getting drawn into extremism.

But unlike the case in many European countries, the United States’ speech protections and criminal laws make it more difficult to investigate or arrest someone for spewing threatening and dangerous rhetoric online. “We have extremely few tools to appropriately deal with people who express violent hateful things unless they’re violent toward particularly public figures, or violent with an extremely specific place and time,” says Rachel Kleinfeld, a senior fellow in Democracy, Conflict, and Governance at the Carnegie Endowment for International Peace.

NEW: From the Election Day through January 6, I embedded with a group of undercover anti-fascists who infiltrate and expose Proud Boys, neo-Nazis, and other members of the violent far right.

Read the inside story of Deplatform Hate: https://t.co/Rpm0hJwEka @longform @longreads

6/ KEY EVIDENCE: here are the six men linked to the #OathKeepers that guarded Roger Stone… now inside the #Capitol, participating in the insurrection. pic.twitter.com/mXLQjf1kAJ

A really impressive piece in @zeitonline about how transnational fascist groups network. It's interesting to me the way these different tendencies meld together. Identitarians are publicly quite different from Atomwaffen, but here we see them rallying. /1https://t.co/i0Th66De2R

There is a photo from 2019 showing James Mason together with 12 men. Mason is sitting on a chair in the center wearing a brown shirt and a swastika armband. The men are kneeling or standing around him, all wearing camouflage and skull masks. They are members of the Atomwaffen Division, gathered for a meeting in Las Vegas, with Mason there as a kind of guest of honor. Atomwaffen Division, in German, is their real name. The English translation would be “Atomic Weapons Division.” Founded in 2015, the neo-Nazi group is one of the most hardcore in the world, with AWD members in the U.S. suspected of having committed five murders. And it is heavily influenced by the idea of “leaderless resistance” propagated by James Mason.

“A wonderful, wonderful association,” Mason says in his living room. “Bravehearts.” The idea behind AWD, as the group is known for short, is to “take the fight to the enemy” – and not just in the U.S. AWD now has offshoots in a number of different countries, including Germany. “There was a lot of action in the Ukraine and … clear across Europe, and certainly here,” Mason says. “That’s pretty impressive, I have to admit.”

Almost a year ago, in spring 2020, Mason announced that the Atomwaffen Division was disbanding, but that was likely just a tactical move to alleviate the pressure of FBI investigations. “One name may be disbanded, it may be outlawed,” Mason says. “You pick up another, like changing your underwear, and it means nothing.”

In the U.S., there is a successor organization to the AWD called the National Socialist Order. It appears to be made up in part of the same men, just wearing different underwear. Many neo-Nazis who are not involved in the AWD also look to Mason for guidance. In one memo, the FBI mentions a “Siege network,” which they describe as a global network of online channels and real-world groups that cooperate with each other in analog reality.