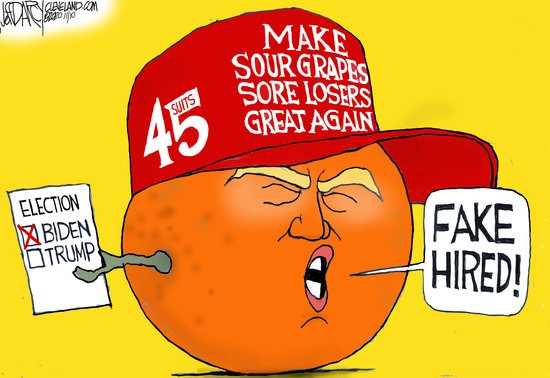 Who could believe that Republicans would actually use a provable voter fraud fallacy to distract from institutional interventions that suppress votes. Why would they divert attention to voter suppression efforts and conspiracy theories as absurd as ballots shipped from abroad. And there’s no shortage of cynical extremists in the GOP. But they’re really into being losers. Even Chamberlain “ led the United Kingdom through the first eight months of the war until his resignation as prime minister on 10 May 1940.”

fivethirtyeight.com/President Biden took office more than three months ago, but Republicans are not any closer to accepting his victory now than they were then. The latest CNN/SSRS survey, released on April 30, found that 70 percent of Republicans believed the false allegation that Biden did not legitimately defeat former President Trump; just 23 percent said Biden legitimately won. Meanwhile, Democrats (97-3 percent) and independents (69-27 percent) said Biden had won fairly. These numbers are very similar to what CNN/SSRS found in mid-January, just before Biden’s inauguration.

At some point out, you just have to take the L. Particularly when not doing so means leveraging dubious or unfounded claims in order to undermine confidence in American democracy.

Writing in The Washington Post this Monday, Phillip Bump contends that the modern day GOP has no concept of “taking the L.”

“Trump earned an L but has refused to take it. Instead, he has stormed off, promising that we haven’t heard the last of him,” Bump writes.

According to Bump, Donald Trump and his most loyal followers’ refusal to accept the results of the 2020 election is posing “real dangers for the American democratic system.”

“Trump’s refusal to acknowledge that he lost hinges on myriad assertions that something dubious or suspicious happened during the 2020 presidential contest,” Bump writes. “The sheer volume of claims is itself often cited as evidence that something needs to be done about election security, a claim that’s a bit like advocating legislation for mandated chimney locks given how many Americans (most of them under the age of 7) believe in Santa Claus.”

There remains no credible evidence of the 2020 results being influenced or shifted in any way that would suggest widespread fraud. (Quite the opposite.) But there is a substantial industry predicated on claiming that voting results are suspect, claims into which Trump and others could tap. Washington Post reporters walked through one such effort over the weekend, exploring how an executive named Russell J. Ramsland Jr. had been working for years to elevate among Republican candidates his baseless claims of fraud. A number of claims later elevated by Trump and his allies were also promulgated by Ramsland, including a forehead-slapping assertion about over-voting in Michigan that mistakenly used data from Minnesota.

The “network includes 13,775 unique Facebook accounts that each posted roughly 15 times per month, for an output of more than 50,000 posts a week.” https://t.co/fWpctdAEin

Facebook once compared itself to a country. But it’s now a “country” where networked hate speech & viral disinformation threaten human rights & democracy with global impacts. What cues can we take from the @OversightBoard’s decision to punt the Trump ban? https://t.co/xAmAp1exKv

But that’s not what’s happening right now with the GOP. They are not just abandoning any commitment to democracy, they’re preparing an outright war on the American political system. And so far there’s little evidence that they’ll pay a price for it.

If you're feeling insufficiently pessimistic today, here I explain why Republicans are probably not going to pay any price for their attack on democracy: https://t.co/zxTXaWJN0X

But the GOP’s base remains sizable enough that they’re always in a position to win, even with those defections. And at the state level, they not only hold the bulk of the power, they’ve gerrymandered state legislative seats so ruthlessly that in some places it’s essentially impossible for Democrats to take control no matter how resoundingly they win the support of the electorate.

So show me the Republicans in Washington who will lose their seats for being too supportive of Trump and the “big lie” of the stolen election. Who are they? The combination of gerrymandering, geographical sorting and polarization means there are almost none. The party can get steadily more unhinged and more implacably opposed to democracy, with consequences for its electoral fortunes that are temporary at most.

All it would take to return them to complete power in Washington is an ordinary midterm election followed by an economic downturn in 2024, whereupon whichever cynical extremist they nominate for president could sneak into the White House.

I’m the first to tell you to take any individual poll on anything with a healthy grain of salt. These polls in concert, however, suggest something fundamental about our politics. Two things. One, that Donald Trump’s grip on the Republican Party may be getting tighter, but not where it’s needed most. Two, and more importantly for our collective sanity, that Americans like it when elected officials tell them the whole truth. The former president told tens of thousands of lies. His approval rating never exceeded 50 percent. Biden mostly tells the truth.¹ A majority of Americans now believes the country is headed in the right direction for the first time in four years.

Remember that lying is not just a matter of deceit. It’s an injury. I mean this literally. Lies are intended to loosen our perception of reality. They make us feel crazy. Many Americans experienced a great sense of relief after Donald Trump left the White House. There’s a very good reason for that. After being punched in the face every day, often many times a day, for four years, it felt fantastic after the punching stopped. I think the Washington press corps underestimates what swing voters are feeling right now and how they will respond to a political party waging war against the truth.

Congressional elections, or midterms, are usually referendums on the person sitting in the White House. When Trump was president, the House went to the Democrats in 2018. Now that Biden is president, the Republicans expect 2022 to be their year. But this dynamic depends on the incredibly short memories of voters. It depends on voters not comparing presidents but instead judging them in isolation. The GOP, by going all-in on Donald Trump, are threatening that dynamic entirely. They are threatening the historical advantage they have when voters forget. Instead, they’re pushing Trump to the forefront of their minds. They’re literally injuring them by repeating the biggest Big Lie. No one alive today has seen anything like this. No one has seen a major political party yoking its short- and long-term fate to the fate of a losing president.

At bikers for Trump rally in SC, featured speaker Lin Wood advocated for a Civil War. I can't repeat this enough: Jan 6 was NOT a one off. Trump's Terrorists are planning more attacks. Like ISIS these groups must be destroyed. https://t.co/Tzl0Rz0xVo

(43291)
$0.00 (as of May 22, 2022 05:42 GMT -04:00 - More infoProduct prices and availability are accurate as of the date/time indicated and are subject to change. Any price and availability information displayed on [relevant Amazon Site(s), as applicable] at the time of purchase will apply to the purchase of this product.)