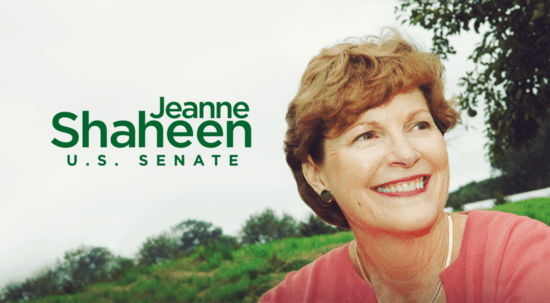 Last night in New Hampshire, President Trump gave a reckless, divisive speech at a massive campaign rally meant to fire up his extreme Republican base in the state. He threw his full support behind his 2016 campaign manager, Corey Lewandowski, to defeat Senator Jeanne Shaheen and turn New Hampshire red in the November election — and that means that our Democratic champion, Senator Shaheen, needs us standing with her more than ever.

Let’s be clear: to ensure a Democratic majority in the Senate, we must win this race in New Hampshire. That’s why, as part of my new Sprint to 2020 program to elect Democrats in crucial races across the country, I’ll be doing everything I can to re-elect my friend Jeanne Shaheen.

Will you stand with Jeanne now and contribute $8 to support her campaign?

Republicans came close to winning New Hampshire in 2016, and this year, President Trump is pulling out all the stops to make sure they don’t come up short again. He sees New Hampshire as a prime pick-up opportunity for the GOP as they fight to keep the presidency and the Senate.

With President Trump flooding the airwaves and touting lies about health care, immigration, and even child care, we must stand with Jeanne at this pivotal moment and ensure she has the resources she needs to get her message out. I need Jeanne by my side in the Senate fighting the dangerous GOP agenda, but she can only win with our support.

Can we count on you in the fight to defend a crucial Democratic seat in New Hampshire and re-elect Jeanne Shaheen? Pitch in $8 now.