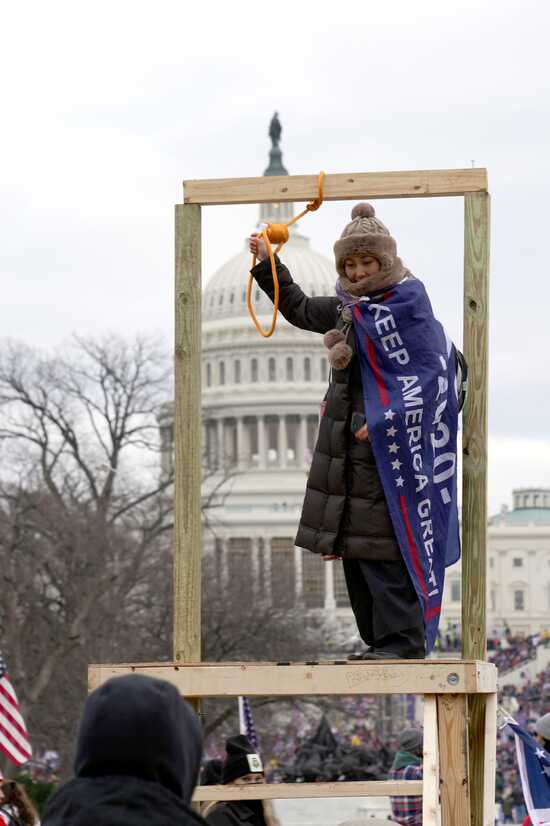 It is unbelievable how far we have fallen instead of moving forward.

The first still picture is gallows being erected for the hanging of Mike Pence.

The picture  below is gallows erected in 1964.

This was especially designed for our black community.  Some were designed for those who believed in equal rights but it is all hate.

for Raising the Flag on Iwo Jima is an iconic photograph of six United States Marines raising the U.S. flag atop Mount Suribachi during the Battle of Iwo Jima in the final stages of the Pacific War. Wikipedia

This was a war against Fascism and hate and these brave marines raised the American Flag to show Democracy is worth fighting for not tearing now.

We cannot move forward until we right the wrongs of what is now a horror show etched in our memories, history books and legacy of America.  We have not moved forward.  We have gone backwards.    The people who did what they did cannot remember the times before.  This is President’s Day and millions of so called Americans cannot accept the moving forward of the times.  They are stuck in lies and deception and division.

I am quite sure except for those shot, drank the Flav o aid for Jim Jones believing his big lie.  The lie of a deranged man who was full of evil calling it good.  There is no difference.  Donald Trump…Jim Jones.  Same kind of people.  They destroyed themselves, their families for a lying cult leader.

Will we ever restore the damage of what is now a country divided against families and neighbors and co workers?  I doubt we will see another heros like John Lewis, Martin Luther King, John Glynn, John Fitzerald Kennedy, or the Hidden Figures that worked at NASA with dreams of equality, brains of geniuses, and courage of our latest hero, Eugene Goodman.

This is Presidents Day and our newly elected president is trying to restore America.  He can’t do it alone.   Our Vice President, our first African American/Asian woman faces horrible uphill climbs.  She

Can’t climb that mountin alone.  We must stand together hand in hand , we the real lovers of freedom and call this evil out.  We must work like we never have to replace the traitors at the ballot box and vote out hate every year.  We must reward good and punish wrong and evildoers.   We must stand together and in peace and truth and do what must be done.  Stand our ground in our own space and speak truth to power without violence and call out the hypocrits and especially those hiding under the flag and cross.   These people are not patriots.  I refuse to use that word as they have turned  it into a dirty word.  We must come up with another word for patriots and patriotism and Christianity because they have dirtied it up.  If you look closely at those words.  Riot is square in the spelling of patriot and patriotism.

One America  is the face of hate and all that enable it.

One is the face of hope and all that embrace it.

Choose your side Republicans.  Truth will win out.  Love always does, even if it takes a century but we must never forget.  NEVER FORGET.

We are in a period of decisions and we made a baby step with President Biden but we are starting over almost back to the Civil War of reviving our image.

Americans of true American beliefs, we must recapture the dream of being an American and make the wrongs, right.  Dare to reclaim, stand for truth and look for pride where we can.  That flag does not wave so pretty to me anymore.  Maybe, we need to add more stars in the field for DC and Puerto Rico.

(22195)
$179.00 (as of May 17, 2022 00:53 GMT -04:00 - More infoProduct prices and availability are accurate as of the date/time indicated and are subject to change. Any price and availability information displayed on [relevant Amazon Site(s), as applicable] at the time of purchase will apply to the purchase of this product.)