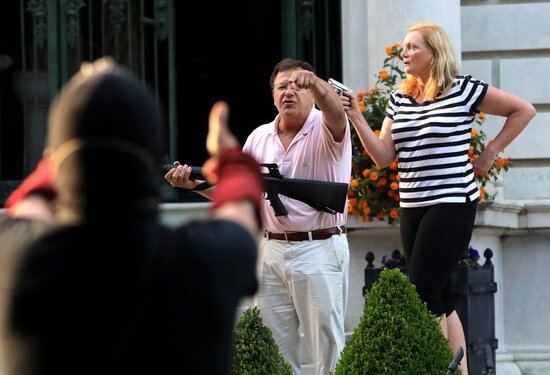 “I can confirm that it’s a consideration, yes,” McCloskey said in a brief interview on Tuesday evening. McCloskey, a wealthy personal-injury lawyer, said that he had no timeline for making a decision about whether to enter the race for the seat from which Republican Sen. Roy Blunt is retiring. This past weekend, McCloskey spoke at a Jackson County GOP dinner, which also drew former Gov. Eric Greitens and state Attorney General Eric Schmitt, both of whom have announced their candidacies.

In June 2020, McCloskey and his wife, Patricia, waved guns at protesters who were marching past their mansion on the way to the home of then–St. Louis Mayor Lyda Krewson. Images of the barefoot couple defending their home — which took place amid a summer of social unrest following the killing of George Floyd — almost immediately went viral. They were later indicted on charges of unlawful use of a weapon and evidence tampering.

The couple became a cause célèbre for conservatives and won the support of then-President Donald Trump, who used the incident to advance a central theme of his reelection campaign — that far-left activists were overrunning upscale communities. Trump retweeted video footage of the incident and defended the couple in a televised interview, saying it was “disgraceful” they were facing legal action.www.politico.com/…

Kimberly Guilfoyle will serve as national chair of the Senate bid for Eric Greitens, the disgraced former GOP governor of Missouri who resigned from office in 2018 following a probe into alleged sexual and campaign misconduct. https://t.co/Xlfr6L3Epc

It's almost as if Josh Hawley knew exactly who he was catering to when he spoke out against certifying the election and spreading misinformation. His campaign made money off a deadly insurrection, and we will never forget that. https://t.co/nys9vlq7zv

It's the only thing I can think about when anyone talks about lying! #BigLie pic.twitter.com/KwVdh4fffv