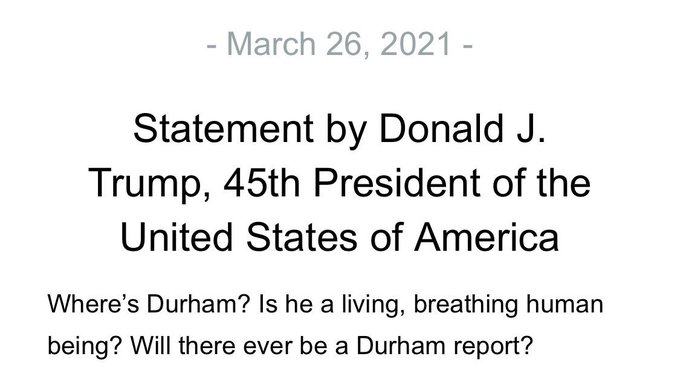 He’s now posing as his own Walmart greeter. Trump regularly crashed random wedding receptions at his Bedminster NJ golf club, because he simply likes that opening-the-car-dealership shtick, and copping a feel from the bride seems more acceptable as perv-adjacent. Try the attention-seeking veal, and tip your cow. Unfortunately Facebook may allow him back by next month. Because none of this is creepy and pathetic. As least he’s not signing Bibles for storm victims and putting his signature on the photographs of shooting victims for their families, or is he?

“Y’know, I just got, I turned off the news, I get all these flash reports, and they’re telling me about the border, they’re telling me about China, they’re telling me about Iran—how’re we doing with Iran, howdya like that? Boy, they were ready to make a deal, they woulda done anything, they woulda done anything, and this guy goes and drops the sanctions and then he says, ‘We’d love to negotiate now,’ [and Iran says], ‘We’re not dealing with the United States at all,’ oh, well, they don’t want to deal with us,” a tuxedoed Trump said. “And China, the same thing, they never treated us that way, right? You saw what happened a few days ago, was terrible, and uh, the border is not good, the border is the worst anybody’s ever seen it, and what you see now, multiply it by 10, Jim—you would know how to handle the border tougher than me. We have to, and the tough is… in the most humanitarian way, because that’s what it is. …

Trump wanders into Mar-a-Lago wedding reception, proceeds to run through a laundry list of his own personal grievances instead of toasting the happy couple: “Do you miss me yet?” https://t.co/NGBFhDGjzJ

Trump also displayed his continuing lack of understanding about the way the American electoral system works, complaining about his loss to now-President Joe Biden. “So it’s a rough thing, and I just say, ‘Do you miss me yet?’” he continued. “We did get 75 million votes, nobody’s ever gotten that. They said, ‘Get 66 million votes, sir, and the election’s over.’ We got 75 million and they said… but you know, you saw what happened, 10:30 in the evening, all of a sudden I said, ‘That’s a strange thing, why are they closing up certain places, right?’ Now, a lot of things happening right now, I just wanted to say, it’s an honor to be here, it’s an honor to have you at Mar-a-Lago, you are a great and beautiful couple.”

TOP: (Dec. 14, 2012) Hours after Sandy Hook, President Obama handwrites his address to the nation at the nearby Newtown High School.

BOTTOM: (Aug. 3, 2019) In the aftermath of El Paso, while Dayton is unfolding, President Trump crashes a wedding at his own private golf resort. pic.twitter.com/IRFOL7JUIm

(2017) Nashville socialite Vanessa Falk‘s wedding at Mar-a-Lago was the must-attend event of the season — or at least that’s what President Trump seemed to think on Saturday night.

Trump, moments after holding a news conference with Japanese Prime Minister Shinzo Abe, “found it impossible to resist dropping in on a nearby wedding reception,” according to CNN. The wedding was that of Falk and Carl Lindner IV, the son of Carl Lindner III, who is the co-CEO of a multibillion-dollar investment firm and who gave money to multiple pro-Trump super-PACs, according to New York Magazine. The bride’s father is Bob Falk, CEO of Healthcare Corp. of Tennessee.

According to CNN, Trump’s briefing about North Korea’s ballistic missile test was the “first emergency foreign policy statement of his presidency.” He did not take questions.

But he did pose for photos with members of the wedding party.

(32937)
$348.00 (as of May 18, 2022 02:51 GMT -04:00 - More infoProduct prices and availability are accurate as of the date/time indicated and are subject to change. Any price and availability information displayed on [relevant Amazon Site(s), as applicable] at the time of purchase will apply to the purchase of this product.)