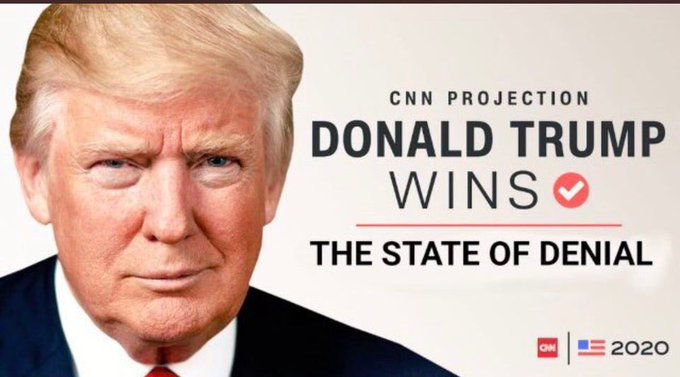 annieli
“A man responsible for Republican vaccine hesitancy wonders why he's being asked to promote getting vaccinated….. It is April 19, 2021, and Trump is still talking about Hillary Clinton and Christopher Steele on Fox News….  says he’s ‘beyond seriously’ considering a 2024 presidential bid”

Fox News personality Sean Hannity asked Trump what he would do differently if he were to run again in 2024 and win.

Trump did not lay out a vision for the future and instead complained about investigations into his ties with Russia.

Trump recounted that his 2016 campaign aides repeatedly asked him about his ties to Russia, but denied there was relationship.

“Getting along with Russia is a good thing, not a bad thing,” Trump argued.

“I got along great with President Putin, I liked him, he liked me,” he said. “That's a good thing, not a bad thing.”

“He signed a Trump Tower Moscow letter on the day of a presidential debate: …” https://t.co/wWm4zXAcmi

The truth is, Trump had coveted a lucrative hotel project in Russia — whether to build one or license his name to be emblazoned on a skyscraper — for decades. “We will be in Moscow at some point,” he said in a 2007 deposition.

Later, as a presidential candidate, he secretly signed an 18-page letter of intent for Trump Tower Moscow on Oct. 28, 2015, the day of the third Republican presidential debate.

But whether Trump was pursuing the arrangement until he clinched the Republican nomination, or right up until he was elected president, isn't the main point. What matters is that a presidential candidate was secretly negotiating a major business deal with a major U.S. adversary — an extraordinary conflict of interest that was concealed from voters.

This is amazing. He wants to confess, except at this point he's too addled and stupid even to understand what he'd be admitting. https://t.co/UXtkjQDCvy

It’s events like this dark money group’s Save America Summit at Trump’s Doral resort that show how Trump’s corruption machine continues to churn even after his presidency, especially when it names those like Matt Gaetz as speakers and special guests.https://t.co/o8wyOoEGTA

During the post election, Donald Trump and his allies lost 64 cases and won 1. https://t.co/gSovinaTSj

Last summer took place in the midst of a deadly pandemic because of a loophole that deemed them ‘protests.’ If Ron’s new law was in effect then, it would have been legal to drive into the crowds showing up to hear Trump in the streets of ‘The Villages’ @RonDeSantisFL

Trump was the only President since Herbert Hoover and the Depression,… to preside over a net LOSS of American jobs. https://t.co/Llvle6Q3Ha pic.twitter.com/XVCiD0oGPH

Here is the GOP leader visiting with the guy who incited a violent mob to overthrow our democracy. https://t.co/YTDJ2VZZzY pic.twitter.com/BtULFtjZNJ

A timeline of hate: Trump’s history of encouraging violence, from 2015 to 2021
https://t.co/oqEChNCoqs via @voxdotcom

Trump’s messaging on January 6 is precisely in line with how he’s historically addressed violence on the part of hate groups and his supporters: He emboldens it.

As far back as 2015, Trump has been connected to documented acts of violence, with perpetrators claiming that he was even their inspiration. In fact, dozens of people enacted violence in Trump’s name in the years before the Capitol attack, according to a 2020 report from ABC News.

In 2016, a white man told officers “Donald Trump will fix them” while being arrested for threatening his Black neighbors with a knife. That same year, a Florida man threatened to burn down a house next to his because a Muslim family purchased it, claiming that Trump’s Muslim ban made it a reason for “concern.” Then there are the more widely known examples, like Cesar Sayoc, who mailed 16 inoperative pipe bombs to Democratic leaders and referred to Trump as a “surrogate father”; and the mass shooting in El Paso, Texas, in 2019 that left 23 dead, where the shooter’s manifesto parroted Trump’s rhetoric about immigrants.

In some cases, Trump denounces the violence, but he often walks back such statements, returning to a message of hate and harm. In August, he defended a teenage supporter who shot three people at a Black Lives Matter protest. And at the first presidential debate of the 2020 election, the president shocked many viewers when he was given an opportunity to condemn white supremacists, but declined.

In October, he equivocated on condemnation of the domestic terrorists who allegedly planned to kidnap Michigan Gov. Gretchen Whitmer, after Trump had stoked outrage over the state’s pandemic safety measures. He criticized Whitmer when the kidnapping plot was revealed and fished for compliments.