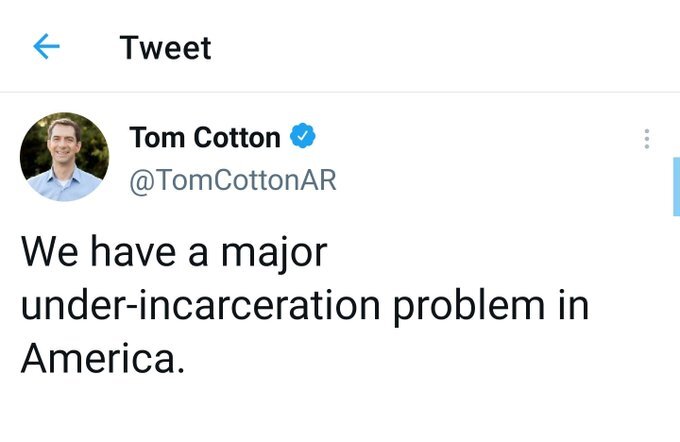 The CEO of YouTube just announced that Donald Trump will be let back on the platform.

Bloomberg News reports that Facebook is likely to lift Trump's ban as well, allowing him to once again push his lies and racist conspiracy theories all over the Internet.

Tom Cotton thinks there aren’t enough people in prison, or perhaps like Arkansas lawmakers, thinks even more medical conditions should be criminalized. Cotton is being supported by private prison corporations.

We have a major under-incarceration problem in America.

And it's only getting worse. https://t.co/guYdE7aHdb

Major American cities saw a 33% increase in homicides last year as a pandemic swept across the country, millions of people joined protests against racial injustice and police brutality, and the economy collapsed under the weight of the pandemic — a crime surge that has continued into the first quarter of this year.
Sixty-three of the 66 largest police jurisdictions saw increases in at least one category of violent crimes in 2020, which include homicide, rape, robbery, and aggravated assault, according to a report produced by the Major Cities Chiefs Association. Baltimore City, Baltimore County and Raleigh, North Carolina, did not report increases in any of the violent crime categories.

Tom Cotton is now winking and nodding toward the big lie pic.twitter.com/ZdErQJVBYx

Tomorrow is a national day of action against the prison-industrial complex. Here’s the story of the incarcerated organizers who put their health and sanity on the line to get the message out. From Daniel Teehan:https://t.co/0uroOhyB9m

If you didn't get the chance to register for #WritingTowardLiberation, don't worry!
You can still watch the conversation about alternatives to the prison industrial complex live on YouTube: https://t.co/RB9Dlb2Rlo

If you needed more proof that the prison industrial complex is not interested in rehabilitation, here's an excellent (and infuriating) list of books banned from US prisons, by @Steven_Vargas_ https://t.co/xIaX5NYDPd

But it was a bait bike, and Paris was arrested for a "theft" crime the police *created* by planting a bicycle in the middle of a group of houseless people for the sole purpose of caging a desperately poor person. (4) https://t.co/qvtD2MQOG2

(22172)
$179.00 (as of May 15, 2022 22:37 GMT -04:00 - More infoProduct prices and availability are accurate as of the date/time indicated and are subject to change. Any price and availability information displayed on [relevant Amazon Site(s), as applicable] at the time of purchase will apply to the purchase of this product.)