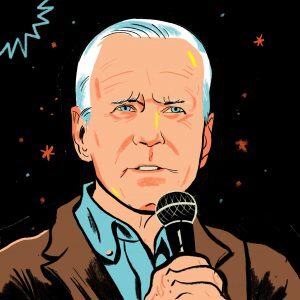 Anand Giridharadas wrote a piece for The Atlantic asserting that Biden has been moving leftward.  This may only be a short term impression only because the GOP is trying to find its way after the previous guy is gone and before he may be indicted. The real problem lies with Joe Manchin.

Welcome to the new progressive era.

In all its unlikely, complicated, age-of-Reagan-busting glory.

I interviewed the gamut of campers in @JoeBiden’s big tent, and wrote this portrait of a coalition for @TheAtlantic.https://t.co/rcnvV7NlBk

(Coming up now on @Morning_Joe.)

Biden, after all, was a conservative Democrat who has exuded personal decency more than he has pushed for structural decency. One conservative publication labeled him “the senator from MBNA” for his friendliness to credit-card companies. He conducted the Clarence Thomas–Anita Hill hearings in a way that hurt Hill, for which he later expressed regret. He voted for the Iraq War and eulogized the segregationist Senator Strom Thurmond. He began his 2020 campaign telling wealthy donors that, in his vision, “nobody has to be punished. No one’s standard of living will change, nothing would fundamentally change.”

But then Biden sold the country on a massive rescue package that his erstwhile rival Sanders has called “the single most significant piece of legislation for working-class people that has been passed since the 1960s.” He quickly followed that with an infrastructure proposal that includes everything from roads to a strengthened safety net for caregivers, and focuses on redressing the harms of climate change and the racist urban planning of the past. Biden plans to finance it partially through a tax increase on the corporations he was once better known for protecting. There have been a slew of executive orders, many of real import, as well as gestures like standing up for Amazon workers seeking to unionize.

The conversations I’ve had in recent weeks have painted a portrait of an improbable coming-together of people and forces: a moderate president, with an ascendant progressive movement at his back and at his throat, facing a once-in-a-generation window of opportunity. It’s still early. It remains to be seen if this momentum will continue, if the infrastructure plan musters the votes, if the ungainly Sanders-to-Manchin coalition holds. But for now, a capital that has been defined in recent years by the absence of useful action bubbles with generative possibility. And many of us who thought we knew what a Biden presidency would look like, and didn’t expect much from it, are suddenly asking ourselves: How did we get him so wrong?

“Biden failed to see a moral obligation in 1975. Today he can learn from the mistake and redeem it.” https://t.co/3LrXeCHuCU

Currently, 59% approve of the way Biden is handling his job as president, while 39% disapprove. Biden’s job approval rating has increased modestly from 54% in March. Biden’s job approval is comparable to several of his predecessors – including Barack Obama and George H. W. Bush – and much higher than Donald Trump’s in April 2017.

Views of Biden and his administration highlight several stark contrasts with opinions of his predecessor. Far more Americans say they like the way Biden conducts himself as president (46%) than say they don’t (27%), while another 27% have mixed feelings about his conduct. Similarly, 44% say he has changed the tone of political debate for the better, while 29% say he has made the tone of debate worse (27% say he has not changed it much).

On both questions, there are sizable differences in views of Biden and Trump. Last year, just 15% said they liked the way Trump conducted himself as president, which was little changed from telephone surveys dating to 2017. In both 2020 and 2019, majorities (55% on each occasion) said Trump had changed political debate in the U.S. for the worse.

NEW: Joe Biden approaches the 100-day mark of his presidency with a relatively strong job approval rating and the public continuing to express positive views of the coronavirus aid package passed by Congress last month. https://t.co/Gms3Gbkm8k

Really smart piece from ⁦@ezraklein⁩
Biden ran on the left and did not move to the center, he moved even further left.
Everything is about climate change.
(Finally) https://t.co/IxgtxIMqqq

Sen. Ed Markey on legislation to expand the number of Supreme Court justices: “The court is broken. And make no mistake about it, the court is broken because Mitch McConnell, his Senate Republican colleagues, and Donald Trump broke it.”

“While Mr. McConnell and a few other Republicans have been directly critical of Mr. Trump’s conduct following the Capitol riot,” @maggieNYT writes. “Most are trying to avoid alienating the former president, knowing he will set his sights on them.” https://t.co/26M5BQCAfd

Basically every policy Biden has proposed was put forward during the campaign, and polls at 65%-70% to this day. I can’t even remember the last time Mitch McConnell proposed an idea that polled above 40%. https://t.co/zDi3JRptqe

I, for one, welcome our new Dorito overlords. https://t.co/xQhQDvUicz

One for the historians:

With renewed focus on Kilimnik sharing polling data from Manafort and Gates with Russian intelligence – reminder of @imthemadridista scoop that in 2015 Kilimnik set up a company with Cambridge Analytica contractor Sam Patten https://t.co/bNAjZcangb

In the long run, Trump was just another Manafort dictator-client

What are “Things We Never Heard an American President Say Over the Previous Four Years.” https://t.co/1U8rvQZfYt

“You've got a little boy out there trying to protect his community…” pic.twitter.com/3m9o8pBwsR

(33001)
$348.00 (as of May 18, 2022 21:08 GMT -04:00 - More infoProduct prices and availability are accurate as of the date/time indicated and are subject to change. Any price and availability information displayed on [relevant Amazon Site(s), as applicable] at the time of purchase will apply to the purchase of this product.)