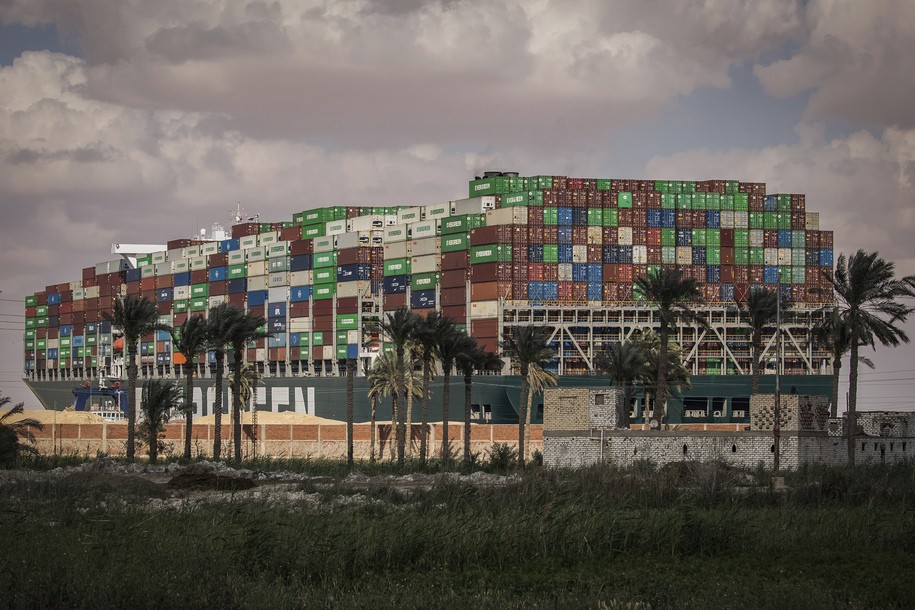 The stuck ship does tell us something about the fragility of global trade and the flow of capital.

Logistics, that concept popularized by United Parcel Service is also about the spatial problems of concrete versus abstract global networks.

Everyone is talking about the big ship getting stuck in the #Suez Canal. Here's a critical logistics reading list on the politics of how we got here -why ships are so huge, why there is a manmade canal cutting through a continent, why global supply chains seem so brittle, & more.— Charmaine Chua (@CharmaineSChua) March 27, 2021

On the rise of the logistics revolution that shaped the martial politics of global trade from the 1960s to present, read @debcowen's seminal The Deadly Life of Logistics
The Deadly Life of Logistics
This talk I gave at @SonicActs, also the partial subject of of my book manuscript, thinks through the irrational rationalities of obsessions with monstrous ships in the logistics industry, and the corresponding effects on global infrastructure re-imagine-europe.eu/resources_item…
wonderful Sinews of War and Trade is a tour de force history of the making or ports & shipping infrastructure in the Arabian Peninsula and beyond. Ch. 1, “route-making” has an important section on the Suez Canal versobooks.com/books/3172-sin…
On Barak's “Powering Empire” is a powerful (literally) account of how the age of empire was driven by coal-powered steamships, leading to the globalization of carbon energy today.
Powering Empire
If you're worried about ships hijacked by pirates as they reroute around the Cape of Good Hope, Jatin Dua's “Captured by Sea” is essential reading; an account of the entanglements of insurance regimes and global capital with the history of Somali Piracy:
Captured at Sea
In a study of the Panama Canal, @martindanyluk interrogates the interspatial global competition premised on attracting cargo traffic to ports and canals, representing capital's tendency to produce “fungible space”:
Fungible Space: Competition and Volatility in the Global Logistics Network – IJURR
classic and crucial essay is a must-read on “counterlogistics” and the possibilities of repurposing global logistical circuits for the communist prospect;
Logistics, Counterlogistics and the Communist Prospect by Jasper Bernes
…which should be followed by Alberto Toscano's excellent, comradely response:
Lineaments of the Logistical State – Viewpoint MagazinePDF
Years ago, I rode on an Evergreen container ship going from the Port of LA to KaoHsiung, Taiwan for 48 days. A series of five posts written onboard explores the everyday life of transoceanic shipping and its banal cruelties. (read from the bottom to top)
Slow Boat to China – The Disorder Of Things
Of course, Tim Mitchell's Carbon Democracy is not to be missed; an agenda-setting account of the global shift from coal to oil and the rise of fossil-fueled capitalism grounded in global shipping mobilities versobooks.com/books/1020-car…
Newly published, Alejandro Colas and @LiamCampling's masterful Capitalism and the Sea covers an incredible geography and history of the political economy, ecology, and geopolitics of the global ocean. versobooks.com/books/3647-cap…
Edited by @martindanyluk, @debcowen, @LalehKhalili, and myself, this special issue of @SocietyandSpace charts an agenda for critical logistics research, with excellent pieces by wonderful contributors such as @RafeefZiadah and Wes Attewell
Environment and Planning D: Society and Space – Volume 36, Number 4, Aug 01, 2018
Finally, for those in the US interested in the consequences and effects of global just-in-time shipping on inland warehousing logistics, Juan De Lara's “Inland Shift” is a wonderful account of the entwinements of race, space, labor and logistics:
Inland Shift
And Phil Neel's “Hinterland” is a beautifully written account of the transformation of the geography of the US and China into a network of coastal hubs and logistical heartlands:
Hinterland
A lot of wonderful work was not covered here; for those who want to dive deeper into global logistics and the ocean, I recommend @ProfPeterCole's Dockworker Power; and the work of Katy Fox-Hoddess, Dave Featherstone, Elizabeth Sibilia, Phil Steinberg, & Hege Hoyer Leivestad.
new book, Disorienting Neoliberalism, is a crucial political theoretic account of how we might orient ourselves to global justice within an economy of global supply chains that threaten freedoms across a dizzying scale:
Disorienting Neoliberalism

Non-Fungible Tokens (NFT)s are more about computing time than the visual space of the object, even as the product is ephemeral to the point of nonsense and the externality of energy consumption will soon bring such activity to a halt.

Money is a great way to concentrate human attention. As I write, a large jpeg, albeit one made up of 5,000 individual jpegs, has been auctioned by Christie’s for $69,346,250. This is EVERYDAYS: THE FIRST 5000 DAYS (2007–20), by videomaker, illustrator and, now, feted artist Beeple – otherwise known as Mike Winkelmann. Winkelmann first shot to fame (or at least to mainstream artworld attention, since he had many nonartworld fans and Instagram followers already) following the auction of a collection of his ‘everydays’ – surrealistic, sometimes comic, often boorishly zeitgeisty CGI images that Winkelmann has been producing and posting once a day, every day, since 1 May 2007 at an online auction last December. Run through the online platform Nifty, Beeple’s sale rang up $3.5 million. But now that he’s hit the upper echelons of art retail, that seems like peanuts.

Beeple’s shock success follows an explosion of interest in the market for collectible art that has opened up around nonfungible tokens (NFTs) – blockchain and cryptocurrency’s answer to the unique art object. Through NFT trading platforms like Nifty and Super Rare, artistic hopefuls are able to sell artworks backed by what are, effectively, tradable digital editioning rights. Technically, pretty much anything digital can be bought and sold as such a ‘tokenised’ NFT asset, and in recent weeks, all manner of digital artefacts have made headlines; a gif of Nyan Cat, the annoying 8-bit retro flying cat, sold for $588,000 (in cryptocurrency equivalent); Twitter founder Jack Dorsey is auctioning the first ever tweet (‘just setting up my twttr’), with bids currently standing at $2.5m; while synthpop star (and tech oligarch Elon Musk’s partner) Grimes sold a collection of digital images and CGI videos for $5.8m.

Selling NFT art is not like opening a street-corner stand. There’s a process and an infrastructure—and a few bumps in the blockchain road.@LanceUlanoff reports: https://t.co/2PlsLa5WYe— Medium (@Medium) March 18, 2021

The artworld is torn by the spectacle of these pop-cultural baubles suddenly transforming what had until now been considered aesthetically thin air into millions. The commercial artworld, battered by a year of COVID-19 disruptions and preoccupied with how to monetise art objects that are hard to show and sell (more so in an era of shuttered galleries and art fairs), has found itself forced to turn to the digital world to maintain the visibility of its wares. Yet countless video programmes, online art-fairs and viewing rooms have not really cracked the serious problems facing a global artworld that is grounded until further notice. And the flaring up of NFTs presents a seductive solution to two key art-market issues: it offers the promised land of a secure, yet very liquid medium of financial exchange, coupled with an inviolable guarantee of uniqueness and scarcity for the objects traded through it. Savvy auctioneers like Christie’s, of course, jumped in when they spotted an opportunity (AKA money).

Why the artworld loves to hate NFT art https://t.co/Dn18sMnPJZ pic.twitter.com/WOCmild1ws