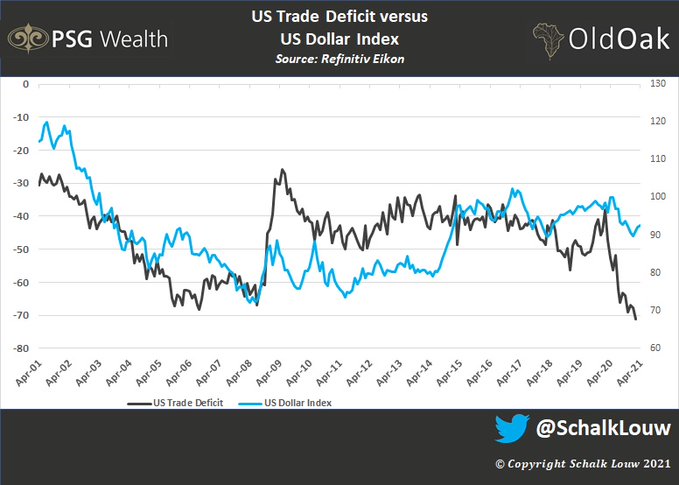 More attention should be paid to an economy that might be in trouble this summer especially as there will be something, something military that will require US attention somewhere, somewhere. That increased military activity might distract from finally indicting the previous guy, who apparently allowed the Chinese economy to become #1 on his watch. The relative expansion of the US economy is dependent on a number of constraints including budget and trade deficits.

Economist Stephanie Kelton tells Ali Velshi Joe Biden and the Democrats should go big, despite concerns about the deficit because a deficit is not inherently bad: “A deficit means the government is making a financial contribution to some other part of our economy. Their deficit becomes our financial surplus. The question is for whom?”

Economist: ‘Every deficit is good for someone … The question is for whom?’ https://t.co/r1udC4Lmfr via @msnbc

The CBO just announced that the federal budget deficit for the month of March was $658 billion.

That's larger than the ANNUAL budget deficit for every year in US history prior to 2009.

Deficit hawks demand racist austerity to repay covid debts…
Neocolonial banks and their enablers hold pandemic relief at ransom…
Workers' and students' debts grow…
What of the debts owed to those on whose backs this system is built?
Movements are afoot.
Join us to discuss. pic.twitter.com/Sas29BSb93

The demand-driven US recovery, combined with logistical constraints on exports, have driven the US trade deficit higher. https://t.co/2ng69PjTwv pic.twitter.com/oypFQDRzxp

WASHINGTON (Reuters) -The U.S. trade deficit surged to a record high in February as the nation’s economic activity rebounded more quickly than that of its global rivals and could remain elevated this year, with massive fiscal stimulus expected to spur the fastest growth in nearly four decades.

The economy is roaring as increased COVID-19 vaccinations and the White House’s $1.9 trillion pandemic rescue package boost domestic demand, a chunk of which is being satiated with imports. President Joe Biden last week proposed a $2 trillion infrastructure plan, expected to pull in even more imports and fire up economic growth.

“The deficit could remain wide this year and next because of the fiscal stimulus and potential infrastructure package that could pass in the second half of this year,” said Ryan Sweet, a senior economist at Moody’s Analytics in West Chester, Pennsylvania. “As the economy continues to strengthen, this will keep the deficit wide.”

The trade deficit jumped 4.8% to a record $71.1 billion in February, the Commerce Department said on Wednesday. Economists polled by Reuters had forecast a $70.5 billion deficit. The goods trade gap was also the highest on record.

Exports dropped 2.6% to $187.3 billion. Exports of goods tumbled 3.5% to $131.1 billion, likely hurt by unseasonably cold weather across large parts of the country. The decline was led by shipments of capital goods, which decreased $2.5 billion.

Consumer goods exports fell as did those of motor vehicles, parts and engines. There were also fewer food exports. The pandemic remained a drag on services exports, especially travel.

Imports of industrial supplies and materials were the highest since October 2018, thanks to $1 billion worth of crude oil imports. That resulted in the United States recording its first petroleum deficit since December 2019.

@DeanBaker13 New York Times debates when it will tell readers that China has the world’s largest economy
from Dean Baker
That seems to be the implication of a David Sanger piece commenting on the state of U.S. relations with Russia and China. https://t.co/bN34XHZVXf