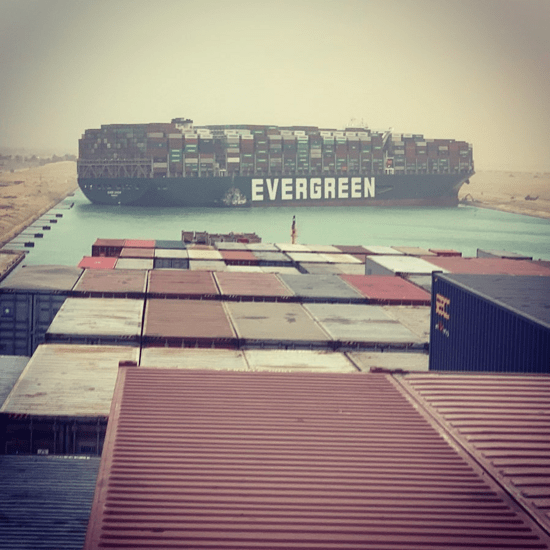 The week has started badly and tragically. Even the Suez Canal got blocked. but we should at least think about Spring Cleaning, even if we never get it completed. It’s enough to make you nuke a space hurricane, eat a pie under the covers, or buy a QAnon Sudoku decoder ring.

Suez Canal traffic is expected to resume soon, according to GAC

The grounded vessel has been partially refloated and is now alongside the Canal bank, according to info from the Suez Canal Authority pic.twitter.com/mKexEln6Pa

An enormous container ship became stuck in the Suez Canal late Tuesday, blocking traffic through one of the world’s most important shipping arteries. The ship ran aground amid poor visibility and high winds from a sandstorm in Egypt, local officials said.

QAnon is abuzz with the Suez Canal story.

Given the Ever Given ship's call sign is H3RC, and Hillary Clinton's initials are HRC, and the ship is operated by Evergreen Marine, and Hillary's secret service code is Evergreen, the ship is tarfficking kids on behalf of the Clintons. pic.twitter.com/4iI42QS5Ca

Doing some spring cleaning. Got to make my home clean as best as I can pic.twitter.com/ACrQJCgjD3

“The Trial of the Chicago 7” (Marc Platt and Stuart Besser, producers)

Thomas Vinterberg (“Another Round”)

Best Actor in a Leading Role

Best Actress in a Leading Role

Vanessa Kirby (“Pieces of a Woman”)

“If Anything Happens I Love You” (Netflix)

🚁Did you know that NASA’s aeronautical innovators had a hand in the creation of the first flying vehicle on Mars? The Ingenuity Mars Helicopter was developed by @NASAJPL with substantial contributions from @NASAAmes and @NASA_Langley.
Learn more: https://t.co/2iUX3g6oZt pic.twitter.com/ar0mEAISUC

“I really don't know how to describe it. It was like the turkeys mounted a counter-attack. It was almost as if they were… organized.” https://t.co/JB5sTyq179

Stop using these words and phrases

People want clarity and accountability, and adding the word “might” in your messaging does not provide either, says Short. “It reminds me of Yoda saying, ‘Do or do not. There is no try,'” she says. “‘Might’ comes from a place of apprehension. Consider why that is. If your apprehension serves no purpose, step into a more assertive word choice, such as ‘I will’ or “We will.'”

“Pretty” is another adverb that diminishes your message and is unnecessary. For example, you might say, “I’m pretty sure we will hit that goal.” “In 2021, we need to get beyond hedging,” says Short. “If you are unsure, you are better off clarifying the degree of uncertainty instead. Say, ‘I’m 75% certain we will hit our goal.'”

On the March 16 YouTube edition of Louder with Crowder, Steven Crowder and his co-hosts engaged in a wildly racist bit on Black farmers, employing racist stereotypes and offensive language. Co-host Dave Landau remarked, “I thought the last thing they would want to do is be farmers. Wasn’t that a big problem for hundreds of years?”

Out of the 3.4 million farmers in the United States, only about 45,000 are Black. The purpose of the aid in the American Rescue Plan is to lessen the racial gap in the farming community and correct decades of discrimination from the U.S. Department of Agriculture toward Black farmers. Conservative media have been, predictably, smearing this aid provision, framing it as “reparations” and discriminatory to white people.

in this clip he makes fun of Black Detroiters for using meth………a drug that white people use at a rate more than 3x that of Black people. and Hennessy and sneaker jokes?? i

2. Also, Xinjiang, Tibet, INNER Mongolia (not Mongolia), and Guangxi are autonomous regions, while HK and Macao are SARs. They're different. You really want to argue all this shit with a Chinese person with a Taiwanese background who knows his shit?

And mega Mass. And mega GA. And… https://t.co/RFtEkKARJs

(22444)
$179.00 (as of May 21, 2022 00:22 GMT -04:00 - More infoProduct prices and availability are accurate as of the date/time indicated and are subject to change. Any price and availability information displayed on [relevant Amazon Site(s), as applicable] at the time of purchase will apply to the purchase of this product.)