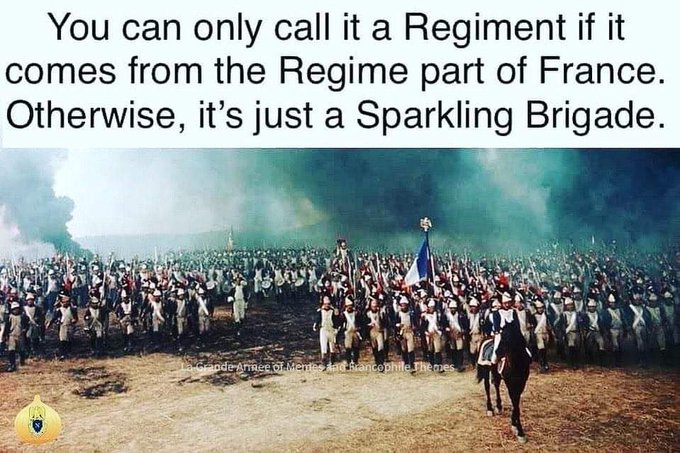 Structural change needs to happen, because in community policing, community should precede policing. The paramilitary trend should not be seen as a burgeoning conflict between armed militias, one more official than the other. We need a de-escalation whose goal is the diametric opposite of the 1/6 insurrection.

The problem isn't a lack of training.

The problem is that our law enforcement is founded specifically on the principles of white supremacy and carrying out a war of suppression.

The problem is the Blue Line.

Modern law enforcement is a descendant of the knight class during the Middle Ages, which was charged not only with making war, but with policing the activities of peasants, collecting their taxes, restricting their movement, and suppressing any potential uprisings. Over time, city-states and cities saw a need for a force separate from the army to mitigate criminal behavior and, most importantly, protect the property of the wealthy.

At this time, the wealthy employed private security firms, bodyguards, and personal militias who were paid to oversee their property and nothing else. The wealthy saw little value in a public body patrolling the streets or looking after others. That began to change, however, as France exploded into revolution in the late 18th century and the argument was made that nation/statewide policing was necessary in order to put down rebellions before they ever began. Now, law enforcement was put into motion as a national defense against foreign antagonists, or the French revolutionaries seeking to spread their revolution, and local traitors who might assist them. Quite literally, they were an army fighting an invisible war.

To do this, police departments were enacted and worked, hand-in-hand, with Right Wing, nationalistic forces to infiltrate, disrupt, intimidate, and prosecute individuals who even so much as advocated the most modest reform as even a solitary challenge to the financial and political order was seen as a threat to the status quo.

In America, policing was embraced for the same purposes, including keeping the status quo and punishing potential change agents, but also for another purpose: the control of slaves. Men, women, and children who escaped their bondage were hunted down by lawmen, returned to their masters, punished, or killed, and the more important and vital function was to prevent the possibility of mobilized revolt by the slaves by any means necessary.

The US Is a Mass-Killing Machine https://t.co/ZufrHMjjiy

At a time when so many public places like schools were closed or their use limited indeed, if you took as your measuring point not mass public killings but mass shootings (defined as four or more people wounded or killed), the pandemic year of 2020 proved to be a record 12 months of armed chaos. In fact, such mass shootings actually surged by 47 percent. As USA Today recounted, “In 2020, the United States reported 611 mass shooting events that resulted in 513 deaths and 2,543 injuries. In 2019, there were 417 mass shootings with 465 deaths and 1,707 injured.” In addition, in that same year, according to projections based on FBI data, there were 4,000 to 5,000 more gun murders than usual, mainly in inner-city communities of color.

In the first 73 days of Joe Biden’s presidency, there were five mass shootings and more than 10,000 gun-violence deaths. In the Covid-19 era, this has been the model the world’s “most exceptional” nation (as American politicians of both parties used to love to call this country) has set for the rest of the planet. Put another way, so far in 2020 and 2021, there have been two pandemics in America, Covid-19 and guns.

And though the weaponization of our citizenry and the carnage that’s gone with it certainly gets attention—President Biden only recently called it “an international embarrassment”—here’s the strange thing: when reporting on such a binge of killings and the weapons industry that stokes it, few here think to include the deaths and other injuries for which the American military has been responsible via its “forever wars” of this century outside our own borders. Nor do they consider the massive US weapons deliveries and sales to other countries that often enough lead to the same. In other words, a full picture of all-American carnage has—to use an apt phrase—remained missing in action.

She was fired for it and denied her pension.

Today a court ordered she must receive her full pension. https://t.co/vj3wllBBiW pic.twitter.com/qafRZqJbvw

Gender recognition is bundled into many commercial facial/image bundled systems, but doesn't get as much attention as FR — I spoke to @farbandish and @djleufer about why it's a big problem and the campaign to ban it https://t.co/D5QKJ8b31E

Thanks a lot asshole we wound up on the list of 100 antifa At Charlottesville. Death threats and all https://t.co/prki2PnMeq