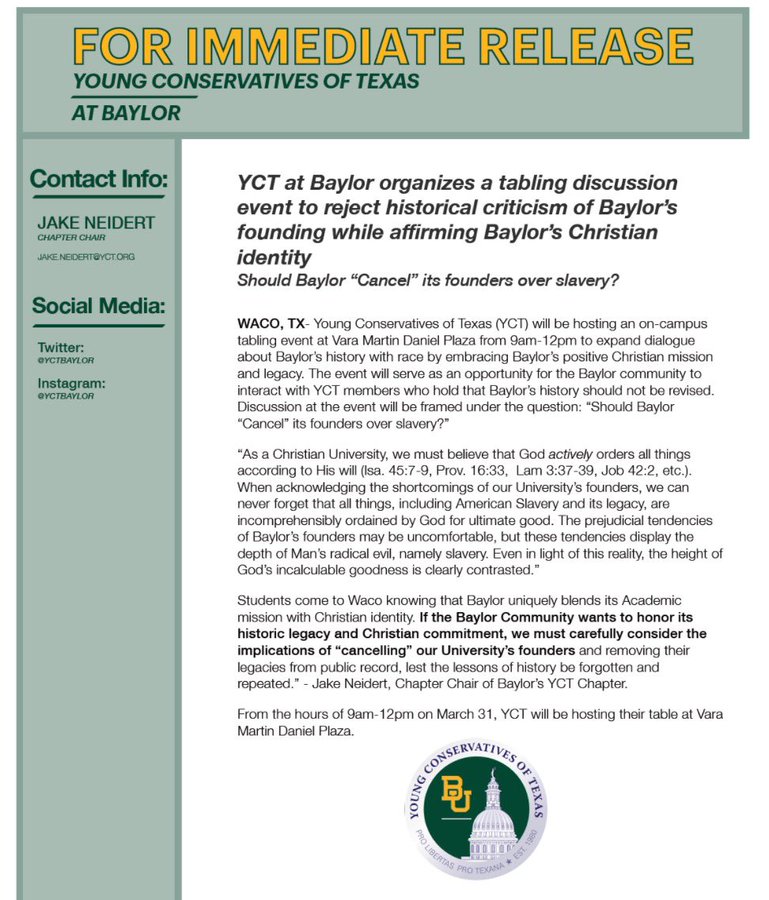 Change as a rising tide seems to be falling short as history’s stream is not as mighty.

Apparently slavery is still “ordained by God for ultimate good” at Baylor University, as a RW campus group wants to accuse the University of canceling its “Christian identity”. No mention of its athletic team’s sexual abuse or whether some US universities need to catch up to the 21st Century.

Congratulations to @Baylor for establishing a commission on the university's historical connections to slavery. Its recommendations, which are symbolic & educational, are good 1st steps towards healing racism.

Several key historical facts that previously have not been acknowledged set the stage for the Commission’s recommendations:

President Joe Biden’s $2 trillion climate and infrastructure plan is too modest to address a global emergency, some environmental advocates say.

Some activists say the Biden administration has failed to propose a blueprint that would satisfy his promise to zero out carbon emissions from the power grid by 2035 and across the economy by 2050 https://t.co/IZdIC7y3Sp

The plan to splurge on transitioning the nation to clean energy, rebuilding the country’s roads and bridges, and improving access to clean water and broadband pales next to the $1 trillion in annual spending that the most ardent climate activists and unions say they want over the next decade to tackle climate change.

Some activists suggested Biden also doesn’t understand that, accusing his administration of failing to propose a blueprint that would satisfy his promise to zero out carbon emissions from the power grid by 2035 and across the economy by 2050, a claim made by groups such as Food & Water Watch and the Center for Biological Diversity.

Much of that criticism revolves around activists’ complaints that the plan’sspending proposals are too modest to achieve meaningful carbon reductions and include technologies that would undermine efforts to curb fossil fuels. Many green groups oppose one of those technologies — carbon capture and sequestration — as a lifeline for the coal, oil and natural gas companies that have long used political influence to impede climate policy. But Biden has backed the nascent technology to help win over unions and fossil fuel-state lawmakers who worry about the economic consequences of a shift to clean energy.

Biden's infrastructure package has more than 5 times the climate spending Obama got into the 2009 Recovery Act.

But that's still 5 times too small to decarbonize the U.S. economy. https://t.co/Hb4IUwxwgp

.@AOC says we need $10 trillion over 10 years to deliver jobs, justice, and a livable planet.pic.twitter.com/EBjacEE4hW

From @WSJopinion: Reshore the supply chain for advanced battery technology from China or risk a blackout on the battlefield, write @ArthurLHerman and Nadia Schadlow https://t.co/BUXj1g9f6t

Save the Earth! – © Chappatte in Le Temps, Switzerland > https://t.co/iBBwm0hWf6 pic.twitter.com/9YfqTA9X3X

Apparently, Wile E. Coyote’s principal vendor, ACME, has a monopsonistic complaint from its client as a matter of tort law.

“Mr. Coyote seeks compensation for personal injuries, loss of business income, and mental suﬀering caused as a direct result of the actions and/or gross negligence of said company.” #NewYorkerArchive https://t.co/HxQZqOqROK

As the Court is no doubt aware, Defendant has a virtual monopoly of manufacture and sale of goods required by Mr. Coyote’s work. It is our contention that Defendant has used its market advantage to the detriment of the consumer of such specialized products as itching powder, giant kites, Burmese tiger traps, anvils, and two-hundred-foot-long rubber bands. Much as he has come to mistrust Defendant’s products, Mr. Coyote has no other domestic source of supply to which to turn. One can only wonder what our trading partners in Western Europe and Japan would make of such a situation, where a giant company is allowed to victimize the consumer in the most reckless and wrongful manner over and over again.

Mr. Coyote respectfully requests that the Court regard these larger economic implications and assess punitive damages in the amount of seventeen million dollars. In addition, Mr. Coyote seeks actual damages (missed meals, medical expenses, days lost from professional occupation) of one million dollars; general damages (mental suffering, injury to reputation) of twenty million dollars; and attorney’s fees of seven hundred and fifty thousand dollars. Total damages: thirty-eight million seven hundred and fifty thousand dollars. By awarding Mr. Coyote the full amount, this Court will censure Defendant, its directors, officers, shareholders, successors, and assigns, in the only language they understand, and reaffirm the right of the individual predator to equal protection under the law. ♦

(43137)
$0.00 (as of May 19, 2022 18:14 GMT -04:00 - More infoProduct prices and availability are accurate as of the date/time indicated and are subject to change. Any price and availability information displayed on [relevant Amazon Site(s), as applicable] at the time of purchase will apply to the purchase of this product.)