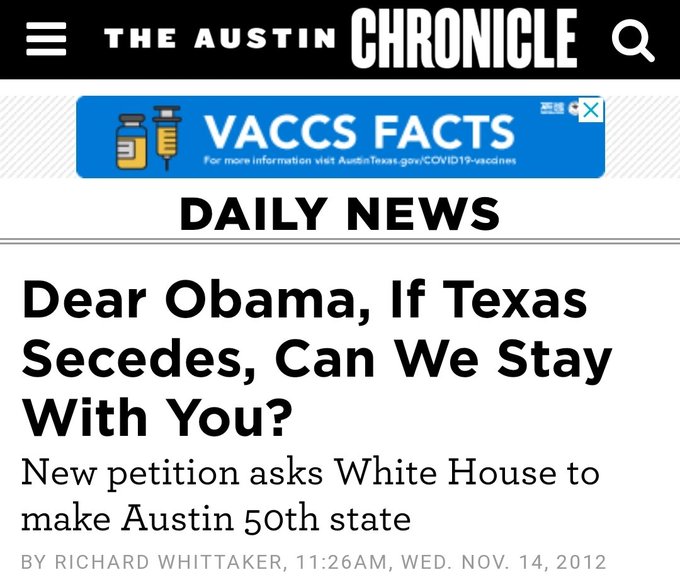 Previous guy colluded with Russia, led a Capitol insurrection, and is not rotting in a prison cell. But if it happens, could there be enough secessionist nut-logs ready and willing to bust him out.

“I think this blending of the far-right militia movement with overt secessionism is something I think we’re going to see more and more of, now that Donald Trump is actually out of power,”

“Secession has long been an extremely fringe position.. [Now] I think the issue is beginning to attain a prominence and a seriousness which is of a totally different kind than the last several election cycles" said @RichardKreitner https://t.co/W3a2BPuiJi

The biggest and loudest of the current movements is “Texit,” spearheaded by the Texas Nationalist Movement. Supporters first began floating this idea about two decades ago in response to what they saw as unfair taxation rates and overreach from the federal government.But this is the first year that their core mission—seceding from the U.S. in pursuit of independence—will be put to Texans for a vote. “The Texan Independence Referendum Act,” or House Bill 1359, introduced by State Rep. Kyle Biedermann, will determine whether there should be a referendum on the issue. Legislators are expected to vote on it by May, when Texas’ legislative session ends.

While the “Texas Nationalist Movement” appears to be gaining steam, elected officials and extremists elsewhere. such as Wyoming, Mississippi, and Georgi, are watching closely. Disillusioned Trump supporters online are building on the “Texit” movement and advocating for “Rexit,” a red-state exit from the U.S. And county-level separatist movements—a different phenomenon than secession but still rooted in deep divisions—are also underway in at least three states.

The renewed energy behind these secession and separatist movements —specifically the “Texit” movement in Texas—comes during intense polarization, raging culture wars, a surge in political violence and in the wake of a conspiracy-driven insurrection at the U.S. Capitol. A poll last month from Quinnipiac University found that 76% of self-identified Republicans believe the lie that the 2020 election was plagued by widespread fraud, which offers some insight into how many people question the legitimacy of the Biden Administration.

Two Republican US senators were on Laura Ingraham's show tonight. She's talking about the country breaking up. pic.twitter.com/sMXBjxRGFm

(2015) Nathan Smith, who styles himself the “foreign minister” for the Texas Nationalist Movement, appeared last Spring at a far-right confab in St. Petersburg, Russia. Despite roaming around in his cowboy hat, Smith managed to keep a low-key presence at the conference, which was dominated by fascists and neo-Nazis railing against Western decadence. But at least one Russian newspaper, Vzglyad, caught up with the American, noted that TNM is “hardly a marginal group,”and quoted Smith liberally on the excellent prospects for a partial breakup of the United States. Smith declared that the Texas National Movement has 250,000 supporters—including all the Texans currently serving in the U.S. Army—and they all “identify themselves first and foremost as Texans” but are being forced to remain Americans.  The United States, he added, “is not a democracy, but a dictatorship.”  The Kremlin’s famed troll farms took the interview and ran with it, with dozens of bots instantly tweeting about a “Free Texas.”

For Russians, this was delicious payback. Since the breakup of the Soviet Union two decades ago, many Russians have come to blame the United States for their plight; a seething resentment over U.S. culpability in the loss of Russian national power is one of the reasons Vladimir Putin is so popular. It has only worsened since the United States has led an international effort to isolate and sanction Moscow over its annexation of Crimea and incursions into eastern Ukraine. Thus, over the past 15 months there has been a sudden, bizarro uptick of Russian interest in and around the American Southwest, most notably Texas, where secessionist sentiment never seems to entirely die out (TNM’s predecessor group, the “Republic of Texas,” disbanded after secessionist militants took hostages in 1997). In a rehash of the Soviet Union’s fate, numerous Russian voices have taken to envisioning an American break-up, E Pluribus Unum in inverse—out of one, many.

Nor is Texas the lone region for which Russia has cast secessionist support since the Crimean seizure. Venice, Scotland, Catalonia—the Russian media have voiced fervent support for secession in all these Western allies . (Of course, Moscow’s mantra—secession for thee, but not for me—means you’d be hard-pressed to find any Russian official offering support for Siberian, Tatar, or Chechen independence.) “Since the destabilization of the West is on Russia’s agenda, they may try to reach out to the U.S. separatists,” Anton Shekhovtsov, a researcher on Moscow’s links to far-right movements in Europe, told me. Russia wants a “deepening of social divisions in the American society, destabilizing the internal political life.” And certain Texans, rather than running from the taint of an authoritarian backing, have reciprocated.

One of the reasons the U.S. military covertly elected #Trump in 2016 was for Texas to stay in the United States. The secession movements could be starting again.https://t.co/xjcWPgk2Ho

Building on the March 2021 @JCWE1 special issue, Paul Barba explores the renewed debates over Texas secession and connects the current movement with past ones. Check out today’s #Muster: https://t.co/CCj6y4AgjI.

What’s striking is that this fetishization of violence was not merely in reaction to an electoral loss. In the days leading up to the election, some pro-Trump commentators were preparing for violence after Trump won, consumed with the idea that Democrats were organizing a “Color Revolution,” wherein anti-Trump demonstrators would attempt to topple a re-elected Trump.

Color Revolution-obsessed activists believed Trump would technically “win” the election (either via the courts or legislatures) and then would face destabilizing protests from groups that might be credibly labeled “Antifa” or “BLM.” Because that hoped-for scenario did not come to fruition, a new, pro-insurrection narrative was needed.

With Joe Biden now safely inaugurated as the 46th president, Ross Douthat’s dreampolitik has turned to the subject of secession or, more euphemistically, “national divorce.”

After Rep. Liz Cheney voted to impeach Donald Trump for his role in inciting the insurrection, Wyoming state GOP chairman Frank Eathorne told Trump confidant Steve Bannon that his party was considering support for secession. “Many of these Western states have the ability to be self-reliant, and we’re keeping eyes on Texas too, and their consideration of possible secession,” he said on Bannon’s podcast.

The "secession fantasia" of leading voices–supposedly *intellectual* voices–on the Trumpist right was/is a very real thing and as 1/6 proved, there are real-world consequences for language like that. https://t.co/sxGo0HdFgN

There is no question that the Capitol Police were forced to defend themselves – and democracy – with one hand tied behind their backs by supervisors who are not loyal to the government of the United States and must be prosecuted accordingly: https://t.co/WpsbwuAI31

Watching "American Insurrection" on @frontlinepbs and want to learn more about the radicalization of Steven Carrillo?

Read this new investigation from our partners at @ucbsoj

"How an Active Duty Airman Tried to Start a Civil War"https://t.co/anDiOq7o2Q

Where was Michael Flynn from 1:11pm to 6pm on January 6? Asking for democracy.