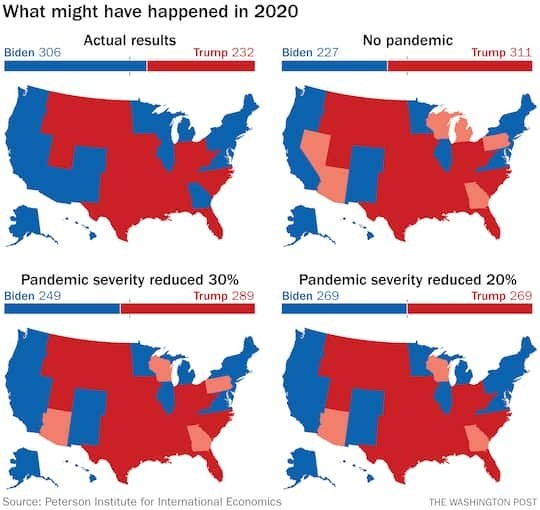 So much dodging bullets these past months, but so many tradeoffs. What remains is that we now have a POTUS who can actually talk about “modern Jim Crow” rather than the previous guy making a mockery of the office.

“A new study by an UCLA economist estimates that 400,000 people in this country died of Covid who could have been saved if Donald Trump and the Republican Party had implemented a more effective health strategy,” says Chris Hayes. https://t.co/SAYgMgEUVy

The Centers for Disease Control and Prevention were recommending the wearing of masks as early as April of last year, but Trump declined to do so. That helped bolster a partisan response to the pandemic, with Trump advocating for states to stay hands off — largely, it seems, out of concern that reductions in economic activity would hurt his reelection bid.
Other research suggests that it was instead the lax approach to the pandemic that led to Trump’s eventual defeat. His own pollster, Tony Fabrizio, produced research showing how those who voted against Trump were more likely to view his response to the pandemic critically. There’s necessarily a chicken-egg question here, with preexisting Trump skeptics probably being less likely to say that they thought he did a good job on the pandemic. But there’s a correlation.
That idea, though, is reinforced by other research, including a paper released this month from researchers at the Peterson Institute for International Economics. That analysis, conducted by Marcus Noland and Eva Yiwen Zhang, considered three indicators: deaths per confirmed case, change in the number of people working or seeking work, and the share of employment in sectors harder hit by the pandemic (such as food service).
In one counterfactual — What if there had been no pandemic? — the results are stark.
“Trump’s vote share increased by 2 percentage points on average across counties nationally,” the researchers find. “Of this shift, 8 percent comes from the COVID-19 case fatality rate, 12 percent from the effect via COVID-19-vulnerable industries, and 80 percent from the decline in the labor force.”

That is more than enough for Trump to have been reelected.

But the pandemic happened. So two other counterfactuals address the more realistic question of how a less-severe pandemic would have played out. Had those three indicators been 30 percent better, Trump again wins, though more narrowly. Were they only 20 percent better, Trump’s victory narrows further — leading to an electoral college tie.
www.washingtonpost.com/…

And yet there’s so much more to fix…

“When patients like me suggest limiting the drug industry’s power to dictate prices,” writes @DavidP4AD, “the companies threaten that innovation will cease — even though the foundation for most innovation in drug development is paid for by government.” https://t.co/cTKW6XIZmg

More than two in five American adults have reported bouts of anxiety or depression during the pandemic, federal health researchers said on Friday. In late January and early February more than 41% of all adults reported symptoms, up from 36.4% in August. https://t.co/lZGwinPOIb

And what would make us more depressed, an informal economy in so-called vaccine passports.

There’s also a strong market for negative COVID-19 tests among travelers, including a “buy two, get the third for free” deal. Those falsified results can be purchased for $25 in less than 30 minutes.#FreshVoicesRise https://t.co/AD6GEKIK7N

The local-meth-lab thing was always exaggerated during the peak meth years, which says a lot about the American self-image: We want to be a nation of moonshiners, when we are really mostly passive consumers of products issuing out of global supply chains. https://t.co/pztBHg2jTt

(33066)
$348.00 (as of May 20, 2022 06:01 GMT -04:00 - More infoProduct prices and availability are accurate as of the date/time indicated and are subject to change. Any price and availability information displayed on [relevant Amazon Site(s), as applicable] at the time of purchase will apply to the purchase of this product.)