Actually, had Spielberg reduced the running time, the film 1941 might have been a classic. The classic film history teaching exercise would be to edit it down to 2 hours. Craig Lindsey’s article argues for the Pogo conclusion that the enemy is us when we allow fear to take over. 2020 did that for the US if only because the stakes became more existential with the possibility of a second Trump term, complete with all that hyperbole and bombast. Unfortunately, as Jean-Luc Godard says, “All you need for a movie is a gun and a girl.” For Matt Gaetz, his biopic will feature Molly, or something, something.

1941 may be seen as a nonsensical farce to some, but it also may be the most fearless, American movie about national fear and panic ever made.

Working from a juvenile-on-purpose script (that was, believe it or not, based on real events where Americans raised a ruckus during the war) by longtime buddy John Milius, Bob Gale and future A-list film-maker Robert Zemeckis, Spielberg thought he would be doing an $11m comedy. The budget eventually ballooned to $35m (that’s $135m in today terms). Most of the cast – not just the actual funny people – wanted to play their characters loud and crazy. He soon found that making a bombastic comedy was something he was not equipped to do. “It’s too [expletive] tough,” he flat-out told Rolling Stone shortly after the movie’s release.

When this self-proclaimed “comedy spectacular” was released in December 1979, it was greeted with savage reviews and meager box office receipts. Although it would go on to make $95m worldwide, it will forever be known as Spielberg’s first theatrical failure.

Solidarity was at the heart of Yuri Kochiyama’s work.

A Japanese-American activist whose early political awakenings came while incarcerated in the concentration camps of WWII America, Kochiyama dedicated her life to liberation movements. https://t.co/wqK4KUdcdn

Now you know why QAnon is so obsessed with sex trafficking. Disinformation campaign always flipping the script on what they do. Sounds awfully Roger Stone. He said at 1/5 rally “Russia hoax and stolen election is a sophisticated psy op” yup. HIS

Thread: The story of how @mattgaetz became a target of the Trump justice department is even crazier and weirder than you can imagine.

It involves blockchain, blatant fraud by a local tax collector, and a scheme to steal people’s government ID.

This is NOT AN APRIL FOOLS JOKE.

2/ Northeast of Orlando in 2016, Seminole County replaced their tax collector with a 31-year-old friend of @mattgaetz named Joel Greenberg.

I know you think you saw corruption in the Trump era, but the things Greenberg is alleged to do will truly blow your mind.

3/ First, he went about blowing $1.9 million dollars in your money hiring the groomsmen from his wedding to work for him.

Then he MANDATED that his pals had to wear guns at the office.

4/ Then @mattgaetz’s friend SET UP A BLOCKCHAIN COMPANY inside the taxpayer funded office.

Then he spent $65,860 of taxpayer money on COMPUTER EQUIPMENT for the private blockchain company.

And wait. It gets better.

5/ HE LITERALLY SET THE OFFICE ON FIRE INSTALLING THE EQUIPMENT.

This is where it gets weird.

6/ Then, Greenberg had an opponent for tax collector. So, he ran a Gamergate style disinformation campaign against him with bots and sock puppets to get him smeared as a white supremacist.

Coincidentally, he’s good friends with Roger Stone who has a history of these tactics.

7/ He also started accusing his opponent of rape through sock puppet accounts.

This is where the FBI decides to get involved. They trace the IP address to his house and show up to arrest him. And you’ll never believe what they found.

8/ They find three fake IDs in his wallet, and materials to manufacture more in his office. Where did all this come from?

Well, as tax collectors sometimes people would have to surrender their licenses to him. He would pretend to destroy them and would turn them into fake IDs.

9/ The is where sex trafficking charges come into the picture.

In the midst of this investigation, they find out Greenberg had been using the state database to get information about girls from 14-17 years old.

He would target them, and then form “sugar daddy relationships.”

10/ He would literally use the state database to get their photos, their vehicle information.

After forming the “sugar daddy” relationship with these girls, he would give them gifts in exchange for “companionship.” Hmmmm. Interpret as you will.

11/ Anyway, the reason he was collecting all those IDs was to give the girls fake identification to traffic them across state lines.

He then turned it into an operation for commercial sex acts.

12/ He’s in jail now, thank God. And he was indicted again on these charges yesterday. (Reminder: Innocent until proven guilty. These are allegations.)

So, this brings us to @mattgaetz. In the course of investigating Greenberg, Congressman Gaetz came under scrutiny too.

13/ It was reported yesterday that Trump’s attorney general William Barr was so convinced of the credibility of the charges being brought against Matt Gaetz he started dodging any meeting where he would be present.

Presumably, because Gaetz would pressure him to drop it.

14/ So what did Trump’s Justice Department find on Gaetz? At the center of the investigation was a 17-year-old girl Gaetz had a relationship with. She was reportedly trafficked across state lines.

These cases are frequently prosecuted and usually carry aggressive sentencing.

15/ This brings us to Nestor. The bizarre story of the child from Cuba who started living with Gaetz around the age of 12.

Gaetz says he is his son, yet no records show he is adopted. It’s a very disturbing overall picture.

Anyway. All this was reported by the @orlandosentinel.

16/ The case against Greenberg started with an allegation he was using sock puppets to accuse his opponent of rape. God only knows what they found on Gaetz to make William Barr continue prosecuting this case. 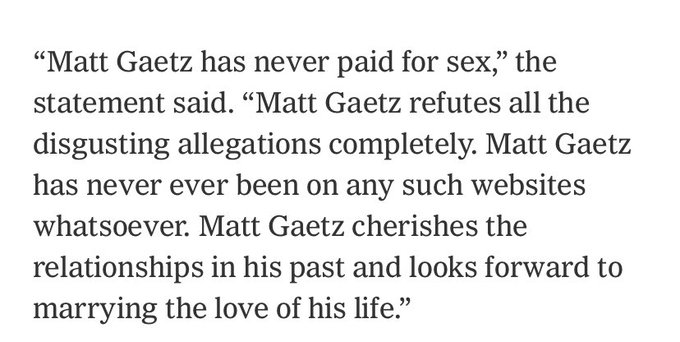 I would read a memoir by Matt Gertz about what it's like to be mistaken for Matt Gaetz. https://t.co/8Lc2sgncoH

The worst was finding pictures of him just as I was trying to find out who this kid really was. That’s also how I found a video of him delivering a talk, dressed like me, and even copying my gestures and the way I talk, as some people pointed out. I know I don’t have a monopoly on items of clothing like denim shirts, but in the context of everything else, it all falls into place, especially given that he was reading out stuff that I’d written. He even copied my tattoos, even though everyone told me his tattoos are quite badly done.

From there, it wasn’t that difficult to find him and figure out what else he’d claimed as his. We realized he’d been writing to us using fake names, but when it came to putting on this persona, he was using his real name. We Googled him and found pictures of him and his Facebook page. His website was a copy of Anna’s website, even his biography was actually hers, just with his name. And with pictures of him dressed as me as the header image. The bit where he dressed up like me and copied my tattoos really got to me. I don’t know what the fuck that was. Tattooing is often seen as a way of creating a unique identity and setting yourself apart, and it’s funny that in pursuit of that he went ahead and copied my tattoos, and then, my life.