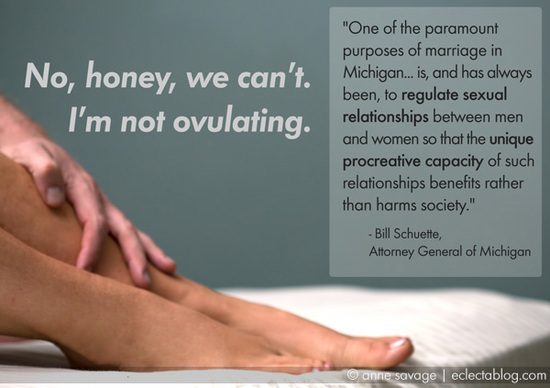 There is a great deal of speculation on how the Supreme Court will decide the case of Obergefell v. Hodges, the case that will likely decide once and for all whether or not same-sex marriage bans at the state level are constitutional or not. Yesterday, they heard two and half hours of oral arguments, an unusually long session (most are only an hour.) It's often difficult to read how the justices are leaning, particularly with justices like Justice Anthony Kennedy – generally considered the swing vote on this case – who is known for asking hard questions to attorneys on both sides. So, we'll just have to wait until late June to find out.

What interested me most about yesterday's arguments was the performance of the team that was arguing on behalf of the state of Michigan. As I wrote about earlier this month, despite having over 100 attorneys on his staff, Michigan Attorney General Bill Schuette went out and hired a private attorney to do his dirty work for him in front of the Supreme Court justices. Many have speculated that, if the SCOTUS rules against him, he didn't want that loss on HIS hands.

Yesterday, that attorney, John Bursch of Schuette’s former employer Warner Norcross & Judd, presented essentially one argument and that is that the state's compelling interest in marriage is to create a bond between children and their biological parents. His justification that this argument compels states to ban same-sex marriage is that by not doing so, the state would create a situation where marriage is so devalued that it will result in more children being born out of wedlock.

Earlier this year President Biden held a press conference during which Peter Doocy of Fox News asked one his hallmark...