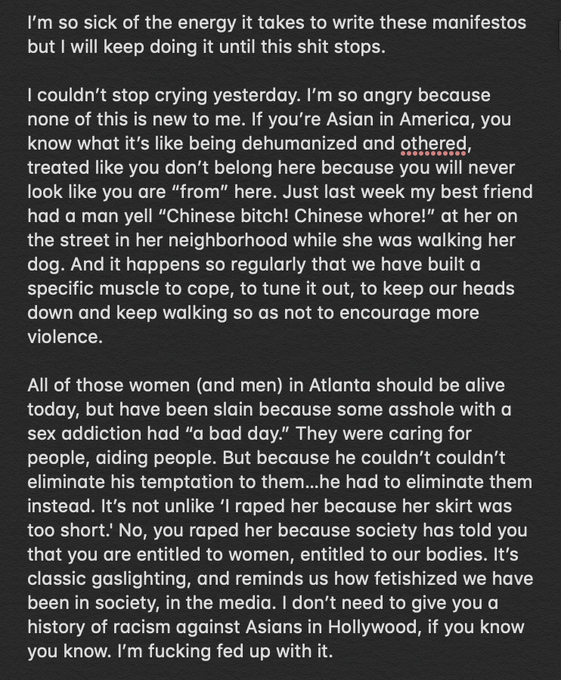 So much thick-headed media activity this past week. OTOH Chuck Todd panders to the center again, or perhaps it's the college drop-out demographic.

A @MeetThePress fail today: talking about anti-Asian violence and racism – without any Asians on the panel. I can’t imagine MTP having a discussion about anti-Black racism without any Black panelists, but when it comes to Asians . . . pic.twitter.com/ba7BrMM9JV

Chip Roy advocates lynching because that's what guys from Maryland do in Texas, refuse to apologize. Because an elected lawmaker doesn’t care about…. laws.

“There's old sayings in Texas about find all the rope in Texas and get a tall oak tree. You know, we take justice very seriously, & we ought to do that. Round up the bad guys.” — here's Rep. Chip Roy (R-TX) glorifying lynchings during hearing on violence against Asian-Americans pic.twitter.com/uy5irfmJCo

the Chinese massacre of 1871 was the single largest lynching event in US history.

“Chip Roy glorified lynching at a hearing on violence against Asians. The largest mass lynching in US history was against Chinese immigrants,” Rep. Lieu tweeted, referring to the Chinese Massacre of 1871 in Los Angeles. At least 17 people were hanged. https://t.co/RGlQM7tOot

“I am not a virus”: Rep. Lieu tells GOP to stop using racist terms. https://t.co/Et12cHxUqv

The Massage Parlor murders in Georgia remind us that guns, the South, and racially motivated murders have a long history.

As I lay out in detail in my book The Hidden History of Guns and the Second Amendment, the Second Amendment was written the way it was, at the time it was, to guarantee that Virginia, South Carolina and Georgia could maintain their state-based militias, which they explicitly referred to as “Slave Patrols.”

Those Slave Patrols were used for hundreds of years by white people to keep African-Americans under their thumbs, and, after the failure of Reconstruction in the election of 1876, the Klan used guns as readily as they did nooses to terrorize Black people in the South.

Thus it should be no surprise that when a 21-year-old white man in Georgia decided he wanted to murder Asian women, he would stop at a gun shop and walk out minutes later with a 9 mm handgun.

I used to live in Georgia, and attended the Georgia Police Academy for a book I was writing the year the Olympics were in Atlanta. When you buy a gun in that state, there are no background checks and no questions asked: all you need is a state-issued ID and either cash or a credit card.

There’s also no waiting period. Thirteen states and Washington DC have waiting periods that run from as little as 3 to as many as 14 days between the time you show up in the store and lay down your ID and money, and the time you can pick up your gun and take it home.

“In the US, Racism & “Gun Culture” are intertwined.

“The combination is so potent that even after mass shootings in schools & concerts, the racist/gun freaks in Congress prevent any motion toward rational gun control in this country.”https://t.co/rNoaHT3u7p

and in other dope news:

Ma’am, we know you are an asshat. You can stop working so hard to convince us.