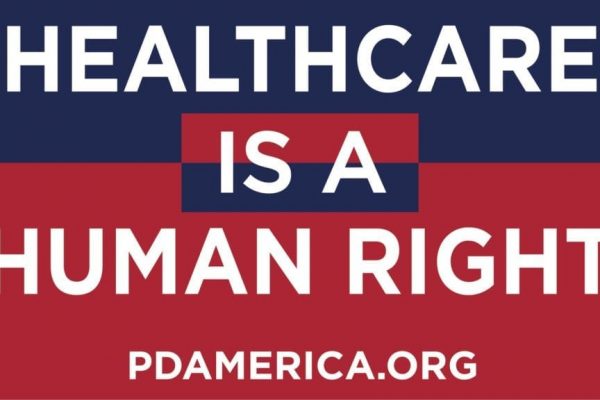 I’m a recently retired Emergency Room physician, and after 37-plus years in the business I should know that #SinglePayer expanded and improved #MedicareForAll will save money and save lives.  And as an engaged citizen and a lifelong grassroots political organizer, I know it will beat Donald Trump in 2020.

Over the years, my night shifts in the ER became increasingly filled with folks suffering from untreated medical conditions like severe dental infections or unstable mental health ailments.  I had no way of knowing exactly how many at the time, but I well imagined the many sufferers of strokes, heart attacks, diabetic coma, and septic shock as being those who had avoided regular medical care or medications too expensive to take as recommended.

And yet thanks to lots of good economic studies and public discussions especially from champions like U.S. Senators Bernie Sanders and Elizabeth Warren, it now requires no imagination whatsoever to know that the phenomenal waste, fraud, and abuse of big insurance and big pharma are driving up costs to an unsustainable level, resulting in still far too many preventable deaths per year. (This is despite the bit of progress made in the last decade with the Affordable Care Act.)  Every study that has ever been done on the subject, and there are lots of them, clearly shows that by eliminating private health insurance and obtaining bulk purchasing capability for drugs and medical devices in a #SinglePayer system, we Americans can have expanded benefits at a fraction of what we are now paying for health care, as they do in all other advanced countries around the world except ours.  And as Bernie and Elizabeth say, it’s a matter of political will not finances that is holding us back.

Significantly, more and more of us in America are catching on.  A 2018 poll suggests two out of three favorability overall for a #MedicareForAll system that ensures everyone living in America can have all essential medical services with free choice of doctors, hospitals, and approved ancillary services.  And politicians are slowly getting on board, following the lead of advocates who are no longer content to sit back while their friends, family and colleagues rack up big insurance and big pharma horror stories.

Clearly in the Democratic presidential primaries to date, the advocates of #MedicareForAll are rising to the top tier while those too timid to address the crisis head-on are falling by the wayside.  The people know that big problems require big change, and leaders offering “baby steps” will not be rewarded with their votes.

More and more of us are also now coming to see that the movement for #HealthcareJustice is just a part of what is needed to address a very large array of social injustices including our #ClimateEmergency, student loan debt, affordable housing, infrastructure needs, mass incarceration, refugee resettlement, gun violence, hate crimes, slave labor, and more. This is why the prospect of a #GreenNewDeal that includes #MedicareForAll makes so much sense.

This is also why the sham promises of President Donald J. Trump will not stand the light of day at election time when exposed to the strength of candidates who run on the actual needs of the American people, like #MedicareForAll.  And the more critical the need, the more politically sound the judgment of voters will be.

You don’t have to be a retired ER physician to see that Donald Trump and his Republican enablers clearly have no such plan, and the Democrats are moving decisively to beat him in 2020 with #SinglePayer, expanded and improved #MedicareForAll, a plan that will save both money and lives.

(43136)
$0.00 (as of May 20, 2022 02:18 GMT -04:00 - More infoProduct prices and availability are accurate as of the date/time indicated and are subject to change. Any price and availability information displayed on [relevant Amazon Site(s), as applicable] at the time of purchase will apply to the purchase of this product.)