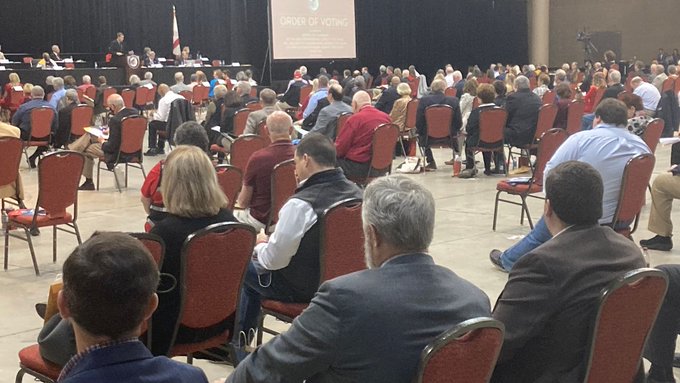 State level GOP parties are doing all kinds of stupidity, censuring its US senators, and following on the usual RW craziness, resorting to the pre-GQP tropes, as befits a state that elected Tommy “not Mr. Potato-Head” Tuberville. This is another extension of the old CT of global new-world order, something, something antisemitism, because Cold War appeasement.

To be sure, the U.N. has failed to keep total global peace and harmony since its formation after World War II, but it might have escaped Alabama’s attention that there hasn’t been a world war since that time. Moreover, the U.N. has also formed many successful social programs and that is likely why they are on Alabama’s hit list. “What have the liberals at the U.N. ever done for us!”

“The resolution, one of about a dozen the party will consider today, cites what it said were U.N. policies that support abortion, disarmament of citizens, and the influence of socialist countries,” said the report. “It says the U.N. opposes American policies in the Middle East and supports climate control policies that would wipe out jobs.”

In other words, it’s just another liberal elite organization that just tries to feed people, keep the planet healthy, and tries to keep one army from shooting at another army. “Yeah! But what have they ever done for us!” Says a group of people that have not seen everyone young boy in a high school senior class go sign up for the Army or Navy and leave home for five years, and having only half come back.

Yes, the U.N. is far more aspirational than utility, more symbolic than pragmatic. But sometimes symbols matter and the U.N. – for relatively little cost, has helped impose western liberalism (in the best sense) to most of the world, warts and all. “Yeah! But what have they ever done for …”

The Republicans always ask, “What is the right thing to do?”

in other Alabama politics:

New poll finds 69% of Alabama voters (and half of Republicans) think the state should expand #Medicaid https://t.co/fxupIeiJtf