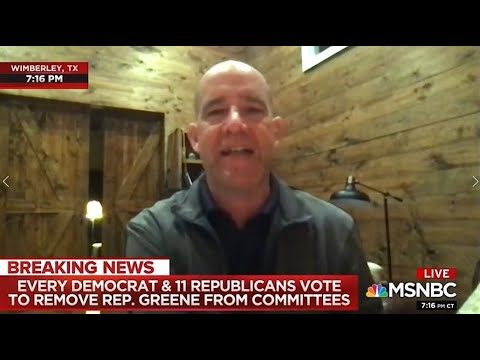 Matthew Dowd gets to the core of the reason many participated in the Capitol insurrection. Many fear raising this issue in detail.

Matthew Dowd gets it

Matthew Dowd expanded on a question Chris Hayes asked about the state of the GOP appropriately.

It is less about Donald Trump than one would believe.

“This is not about Donald Trump,” Dowd said. “So many people talk about the fear of Donald Trump. The Republican leaders and the Republican elected officials aren’t. Donald Trump’s a proxy, and Donald Trump’s a proxy for the 80 or 85 percent of the Republican Party that believes by and large, which Marjorie Taylor Greene believes. They believe that. And so the fear is a Republican primary voter who’s much more aligned with Marjorie Taylor Greene than they are with Liz Cheney. That’s the fear, and I think that’s the problem in America today. We have a major party that is supported by millions of Americans, not a majority but millions of Americans who have this same set of beliefs. So you can get rid of Donald Trump. Cast them out as a pariah. Put them down in Florida. It doesn’t solve the fundamental problem in America today because a smarter, more competent version of Donald Trump will arise and be more dangerous. That’s hard to believe, be more dangerous to the country.”

But then Dowd got real deep stating the inconvenient truth.

“I think there are many different small things we can do,” Dowd continued. “But I think ultimately we have to deal with what’s really behind this, which is we never held the people who wanted slavery accountable and responsible, and we never told the truth in the aftermath. And when reconstruction failed by and large because Abraham Lincoln was killed, when reconstruction failed it led to more than a hundred years where we finally got to civil rights and voting acts, and you can draw a straight line as I’ve said before. You can draw a straight line between the failure of reconstruction and the inability to tell the truth about our country, all the way through Emmett Till and Medgar Evers and Martin Luther King, all the way up to Heather Heyer and all the way up to police shootings that are unjustified. And so that to me is the truth Americans finally have to face. That’s going to resolve our problems when we finally face the truth. There is a segment of the population that does not believe all men and women in America are created equal. That’s the fundamental problem.”

My Books, “It’s Worth It: How to Talk To Your Right-Wing Relatives, Friends, and Neighbors” & “As I See It: Class Warfare: The Only Resort To Right Wing Doom” support  (1)  communication techniques &  (2) our Progressive message delivery.