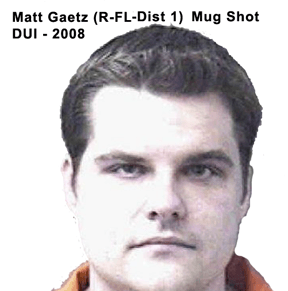 Back in my drinkin’ days in Wisconsin, they used to say that if you woke up with a hangover you had a “big head.” I never took it literally. Until now, I guess.

So during the House Judiciary impeachment meeting yesterday, Matt Gaetz brought up Hunter Biden’s past drug use.

It didn’t go as planned.

During the committee meeting, Gaetz introduced an amendment to strike a reference of former Vice President Joe Biden from the articles of impeachment and put in Burisma, a Ukrainian energy company, and Hunter Biden, who sat on the board of that company.

Gaetz then read aloud from an extensive profile of Hunter Biden in The New Yorker, which detailed Biden's past drug abuse and an incident in which he crashed a rental car and an official from the company found “a crack pipe in the car and, on one of the consoles, a line of white-powder residue.”

Not sure what that has to do with Donald Trump’s impeachment, but since the only marginally cogent argument Republicans have left appears to be “Hey, look, Hunter Biden!” Gaetz presumably thought he was on solid footing.

Well, at least one Democrat wasn’t having it.

[Rep. Hank] Johnson, D-Ga., shot back and hinted at Gaetz's 2008 arrest on charges of driving under the influence.

“The pot calling the kettle black is not something we should do,” Johnson said. “I don't know what members have had problems with substance abuse, been busted for DUI — I don't know. But if I did, I wouldn't raise it against anyone.”

For the record, back in 2008 Gaetz was arrested on suspicion of DUI after he was pulled over for speeding, smelled of alcohol, swayed and staggered as he exited his car, and refused to take a field sobriety or breath test.

The charges were later dropped. And, ironically, Gaetz’s father was a Florida state senator at the time. Not vice president or anything, but it seems a bit hinky — to me, anyway.

Not sure why I brought it up.

(28)
$19.99 $9.99 (as of May 19, 2022 09:58 GMT -04:00 - More infoProduct prices and availability are accurate as of the date/time indicated and are subject to change. Any price and availability information displayed on [relevant Amazon Site(s), as applicable] at the time of purchase will apply to the purchase of this product.)