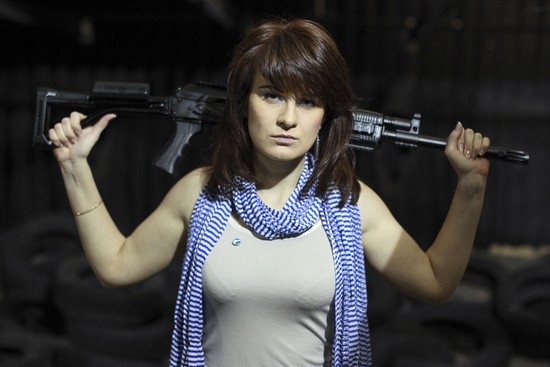 Aside from being the human face of the apparent manipulation of the NRA and the GOP as a conduit for Russian influence, Maria Butina has been released from prison.

(CNN)
Russian gun rights enthusiast Maria Butina was released from the Tallahassee Federal Correction Institution on Friday after having served more than 15 months behind bars, according to the US Federal Bureau of Prisons, and is expected to be immediately deported to Moscow.
[…]
In a pair of exclusive interviews with CNN earlier this year, Butina said she has no plans to become a media darling or television star when she returns home, a nod to the celebrity homecoming Russian intelligence agent Anna Chapman received when she returned to Russia as part of a 2010 spy swap.

Asked about the potential diplomatic ramifications of her case, Butina was more cautious. Officially, neither the US nor Russian governments have pointed to a link between Butina’s case and that of Paul Whelan, a US citizen who was arrested in Russia in December and accused of spying. But some Russia experts said it appeared Whelan may have been picked up as retribution for the charges against Butina. Whelan, who has been behind bars without a trial for 300 days, was ordered held on Thursday until late December by a Moscow judge as a trial for the man remains unlikely to take place before next spring.
Russian President Vladimir Putin has previously criticized the case and Butina’s sentence, calling it “arbitrary,” according to state news agency Ria-Novosti.
“They took, grabbed her, put the girl in jail, but there was nothing to show for it,” Putin said.
Judge Tanya Chutkan, who sentenced Butina earlier this year, said she engaged in work on behalf of a Russian official that was both “sophisticated” and “dangerous.”
www.cnn.com/…

UPDATE: Maria Butina was released from a US prison this morning and was taken into custody by the US Immigration and Naturalization Service, prison says; she is expected to be deported to Moscow. https://t.co/q66MPRTXD5

#Russia's state TV claims that Maria Butina may be back in Moscow as soon as tomorrow. It sounds like she'll be getting a hero's welcome. pic.twitter.com/twV4qL1ayZ

In a matter of weeks Marina Butina will be hailed as a Hero of Russia & revealed as an FSB intelligence officer even if she was just a influence subcontractor. We will be humiliated but Russia will laugh at how Republicans will deny they’ve been played. https://t.co/I8SQzOZh9M