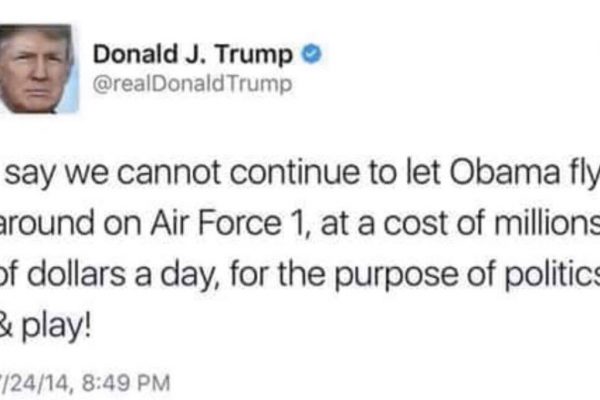 Trump quotes Peter Baker quoting Emerson, as Trump golf trips are 250% of PBO’s at the same moment in their presidencies.

Since Trump insists on playing at courses he owns, the cost is nearly 4 times as high as it was for Obama. More than 2/3 of his golf outings involve 7-figure trips on AF1. https://t.co/33yPJnpOHB

And because Trump insists on playing at courses he owns, the cost to taxpayers has been nearly four times as high as it was for Obama. More than two-thirds of Trump’s golf outings involve seven-figure trips aboard Air Force One, mainly to Florida and New Jersey, but also to Los Angeles, Ireland and Scotland. Obama, in contrast, played most of his golf on courses at military bases within a short drive of the White House.
What’s more, Trump’s insistence on playing at courses he owns and profits from has put at least a few million taxpayer dollars into Trump’s cash registers in the form of hotel room and restaurant charges for the White House staff and Secret Service agents who accompany him.
The Washington Post found recently that Trump’s business has charged the Secret Service as much as $650 a room per night at Mar-a-Lago ― more than three times the normal rate that federal employees are supposed to spend in South Florida ― and $17,000 a month for a cottage at Trump’s Bedminster, New Jersey, resort. During an early Mar-a-Lago visit, White House employees ran up a $1,006 bar tab, which taxpayers also paid.

Lest you think that this is trivial, note that regal presumption (“unitary executive”) is at work in this bit of Article II rationalization for assassination. Autocrat’s Automat.

The Trump Administration has provided a brief legal justification of the #Soleimani strike to Congress, as required by statute: https://t.co/mB3ZxfTtt4— Rebecca Ingber (@becingber) February 14, 2020

Instead, the Administration says the purpose of the strike was to “DETER Iran from conducting or supporting further attacks against US forces and interests .. in the region” and “DEGRADE” Iran's ability to conduct attacks.

The Administration's domestic law claim to use force without specific authorization from Congress is likewise broad, though not surprising, as several administrations have interpretively stretched the bounds of what Congress has authorized under both the 2001 and 2002 AUMFs.

One way to read this theory: once the US sends forces abroad for one purpose authorized by Congress, they may remain even as that purpose changes, and the President can then use force against any regional threat those forces *might* face — including as mere deterrence.

(51660)
$17.62 (as of May 22, 2022 02:44 GMT -04:00 - More infoProduct prices and availability are accurate as of the date/time indicated and are subject to change. Any price and availability information displayed on [relevant Amazon Site(s), as applicable] at the time of purchase will apply to the purchase of this product.)