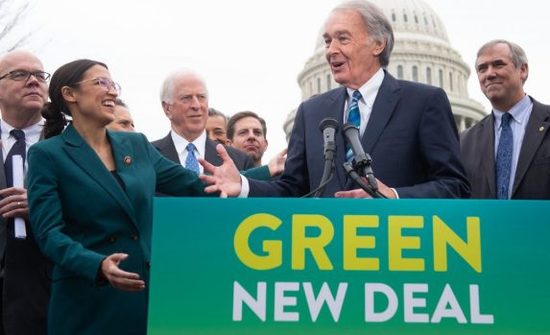 I’m reaching out today to ask you to join me in supporting my friend and co-author of the Green New Deal, Senator Ed Markey.

As you may have heard, I’ve gotten into the habit of getting arrested in our nation’s capital — putting my body on the line with young people, making an intergenerational compact to demand a Green New Deal.

Earlier this year, Senator Ed Markey told me he needed us to help build an army of activists.

That’s why we need to make sure our army is behind him every step of the way as well.

Right now, that means he needs our support in his re-election campaign to the U.S Senate. He’s facing the toughest race of his career in 2020.

Can you make a donation to Senator Ed Markey’s campaign today ahead of the official FEC deadline? The future of our planet depends in many ways on having his powerful leadership in the Senate fighting for the Green New Deal.

Through our protests (and arrests) in Washington, I’ve gotten to know Ed quite well. He’s led on this issue for decades.

He understands that urgent action is needed but it will be hard to accomplish. Because we need systemic change across every sector of our society and it must happen very quickly.

And the truth is that we cannot make the change we need at the scale we need as lone individuals. It will only be possible by combining our powers and lifting our voices together. There's strength in numbers. This is a collective, existential crisis that requires us to come together to fight.

The same is true for campaigns like Senator Markey’s.

It is only with a movement of people behind him that he can win and continue to lead on this issue.

People in this country are really scared about the climate crisis and its threat to our planet and its people. They want to do something, but nobody has asked them.

So today, I’m asking you to do something:

Please make a donation to Senator Ed Markey today. There’s an important FEC deadline coming up in a few days, and I want to make sure everyone knows that our army is behind him — not just in the fight for the Green New Deal but also to support his re-election campaign.

These fights will not be easy, but Senator Markey and I are up for them. I hope you are too. Please join with us.