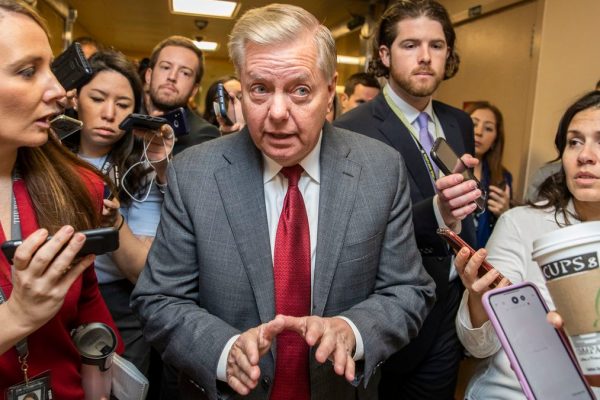 Wait, didn’t we just have a big impeachment trial over this? Oh, never mind. The culprits got away with it.

Of course, this is a little like going back to the bank you robbed in broad daylight to collect the tellers’ wallets. The Department of “Justice” has created an official process for soliciting foreign interference in our elections. I’m sure they’re doing this for every incident of potential corruption that comes up around the globe, not just the ones that have been thoroughly debunked.

So anyway, Lindsey Graham appeared on Face the Nation this morning, and for some reason host Margaret Brennan’s first question wasn’t “Is that a banana republic in your pocket or are you just Fascisti?”

Here's Lindsey Graham telling CBS that Attorney General Barr has "created a process" where Rudy Giuliani can feed Biden dirt from Ukrainian sources directly to the DOJ, and the DOJ will then check it out pic.twitter.com/A6N8YV6tS9

MARGARET BRENNAN You said you talked to Attorney General Barr.

BRENNAN: This morning. Has the Department of Justice been ordered to investigate the Bidens?

GRAHAM: No, the Department of Justice is receiving information coming out of the Ukraine from Rudy. … He told me that they have created a process that Rudy could give information and they would see if [it’s] verified. Rudy Giuliani is a well-known man, he’s a crime fighter, he’s loyal to the president. He’s a good lawyer.

Interesting that Graham’s first comment about Rudy is that he’s a “well-known man.” Uh huh. So are Gary Busey and Randy Quaid.

In case you hadn’t noticed, Rudy has lost it — assuming he ever had it. I’m not sure what he can possibly contribute to an adult conversation other than coffee breath. At this point you’d get better legal advice if you waterboarded a chicken.

(51328)
(as of May 16, 2022 19:02 GMT -04:00 - More infoProduct prices and availability are accurate as of the date/time indicated and are subject to change. Any price and availability information displayed on [relevant Amazon Site(s), as applicable] at the time of purchase will apply to the purchase of this product.)