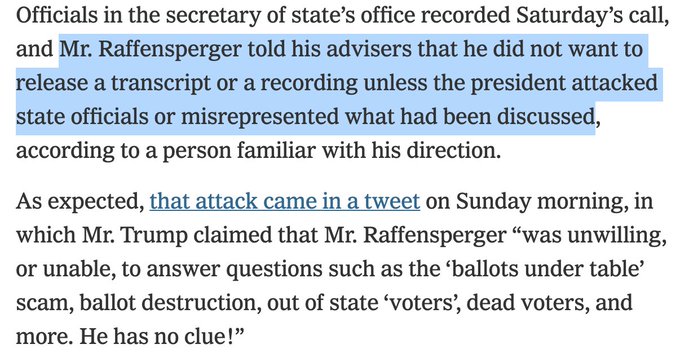 Apparently Trump leaked the Raffensperger audio to WaPo — how clueless is that, even if the NY Times is reporting that it was taped and released by the GA SOS. Most of the call repeats his contrived logic and numbers ad nauseam, as if to flood the transcript with his disinformation stream. Trump is so delusional he thinks this call makes him look good, as this follows his typical tactic of doubling down on misinformation conflict.

“Mr. President, the challenge that you have is the data you have is wrong,” Georgia Secretary Brad Raffensperger tells President Trump

In a recorded hour-long phone call, President Trump told Georgia Secretary of State Brad Raffensperger that he wanted to “find 11,780 votes” in his favor to overturn Joe Biden’s win in the state. The Washington Post also reported that Trump appeared to threaten Raffensperger, saying that his refusal to comply with Trump’s demands would be “a big risk.”

Midway through, Raffensperger pushes back on the assertion that thousands of dead people voted in Georgia. He says only 2 dead voters cast ballots

Observations on transcript and audio of Trump’s effort to flip the vote in GA: Redacted name is Ruby Freeman (they missed one). Trump moves from solicitation to shakedown. The shakedown story continues. Leaked recording from the WH base on voice volumes.

When the story first broke I figured the GA Secstate recorded and leaked it. After listening I believe Trump recorded it (his voice is always the strongest and clearest, and it sounds like a speaker phone being recorded.) So the White House/DJT leaked it. Trump no doubt likes it!

Trump’s conduct on that call is precisely the reason the 25th Ammendment was passed.

🚨BREAKING: #Georgia State Election Board member (only Dem on 5-member board) has asked @GaSecofState Raffensperger to open an investigation into possible civil or CRIMINAL violations in Trump’s phone call, including “solicitation to commit election #fraud,” a FELONY. pic.twitter.com/mhajsRdRyW

We now need Presidents Bush, Carter, Clinton, Obama to defend us and demand his resignation pic.twitter.com/uoh8zaM6PQ

(It’s better in the original Germany(sic))

Trump and his allies have lost 60 post-election lawsuits, including several in GA. There are no cases that could have plausibly been the subject of settlement discussion.

Oh, and I represent parties in all of those cases, so I would have had to be on the phone as well. I wasn't. https://t.co/O4dPrBpbMg

This is also my experience in Georgia. It varies from an actual theory of how the vote will be overturned – one I heard today is that the NSA has the goods – and just sort of a shrugging “hoping for the best” theory that Trump can still win https://t.co/d867kHNvhd

I covered some birther stuff from 2008-2010 and there was a school of thought that if Obama could be proven to be illegitimate all his appointments/signed legislation would be voided. People believe all sorts of things. https://t.co/doshgwPyjY

Trump really said, “All I want to do is this: I just want to find 11,780 votes, which is one more than we have because we won the state.” He's begging for one vote over the margin with Biden.

Fuck you if you still say this is about “fraud.”

The anti-democracy senators demand a repeat of the 1877 commission. It was one of US history's most shameful episodes. The Rs kept the WH one more term, in exchange for an end to Reconstruction – leading to a century of segregation, disenfranchisement, and brutality.

Well my post-election piece on all the ways Trump would trash the presidency and the country on his way out has held up: https://t.co/uZ3GeNs0Kr

In spite of the delusional reasoning at the end of this quote, it appears that one GOP senator may have taken some time to listen to the Trump tape today. https://t.co/cKxyjDHSPT

#TrumpLost … he knows it. These are the words of a #Traitor. pic.twitter.com/iISGhIcqqg

(43136)
$0.00 (as of May 19, 2022 21:14 GMT -04:00 - More infoProduct prices and availability are accurate as of the date/time indicated and are subject to change. Any price and availability information displayed on [relevant Amazon Site(s), as applicable] at the time of purchase will apply to the purchase of this product.)