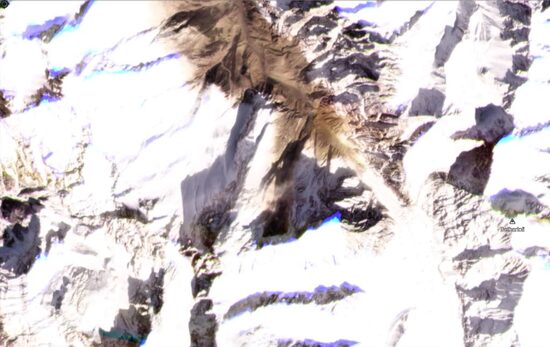 A glacial landslide scar, all that remained of a previous piece of ice that had collpased, is believed to have triggered a new landslide that slammed into and triggered part of Nanda Devi glacier to collapse.

When the rocky debris slammed into the Himalayan glacier’s much larger remnant, it sent rock and ice down a valley where a hydroelectric plant was under construction. Some described it as a rock tsunami. Workers were trapped in tunnels underneath the plant when the reservoir was breached, sending water cascading down a mountain valley where scores of people were killed.

To be clear, this disaster was not caused by a glacial meltwater lake outburst.

There is uncertainty about the cost of this event, but some reports suggest around 170 people, possibly including about 50 labourers at the construction site of the Rishiganga hydroelectric scheme.  There will be huge uncertainty in this figure; hopefully, it will reduce.

There is increasing clarity about the events at Chamoli.  There are a number of reports that the HEP scheme at Tapovan has been swept away (this may be the site in the video in the tweet above), and also that the landslide affected the village of Raini.  The Google Earth image below shows these two locations:-

The scar that triggered the landslide can be seen in red below.

3D rendering of @planetlabs image collected 7th Feb showing the source of the Uttarakhand disaster located by @WaterSHEDLab. Appears to be a complete detachment of a previously glaciated slope #Chamoli #Disaster #Landslide pic.twitter.com/SElrZh36kH

The question as to the cause of this event has been solved by the availability of a Planet Labs image collected today (7 February 2021).  Dr Dan Shugar of the University of Calgary was the first person to deduce from this that the cause of the disaster was a landslide.   This image shows the source of the disaster – it a large rockslope detachment from Trishuli, The scar is the dark area just below the centre of the image.  It has moved northwards onto the glacier, and turned into a rock and ice avalanche that has moved toward the northwest.  Note the huge amounts of dust that has been left by the landslide:

Actrually, it looks like it may have been a landslide from just W of the glacier. See here. Possibly from the steep hanging glacier in the middle of the Google Earth image. pic.twitter.com/6ImcwI91d7

A part of Nanda Devi glacier broke off at Joshimath in Uttarakhand’s Chamoli district on Sunday. The gushing water from the breach triggered an avalanche that swept away hydroelectric stations and trapped more than 100 labourers in tunnels, who are feared dead. The alarmingly increased water levels in the Dhauli Ganga, Rishi Ganga and Alaknanda rivers caused large scale devastation and two hydroelectric projects– NTPC’s Tapovan-Vishnugad hydel project and the Rishi Ganga Hydel Project– were damaged. In an operation by Indo Tibetan Border Police (ITBP), all 16 people were rescued from a tunnel near Tapovan dam in Chamoli. Nearly 170 people were still missing, according to the State Management Disaster Center.

“It came very fast, there was no time to alert anyone” pic.twitter.com/Ep8SLNDvqQ

The AP writes on whether climate change was involved. Fingers have been pointed at global heating being the likely result of the collapse. The IPCC has confirmed more landslides in glaciated mountains will trigger such events long into the future. Per Anjal Prakash, Research Director at the Indian School of Business in Hyderabad.  “The IPCC’s Special Report on Oceans and Cryosphere in a Changing Climate reports that climate change has altered the frequency and magnitude of natural hazards. The scientists reported with medium confidence that in some regions, snow avalanches involving wet snow have increased. Simultaneously, the rain on snow floods has also increased at lower elevations in springs.”

Environmentalists had warned that hydrofracturing in the area was likely dangerous. As always, DFH was ignored.

Some have already started pointing at climate change as a contributing factor given the known melting and breakup of the world’s glaciers, though other factors such as erosion, earthquakes, a buildup of water pressure and volcanic eruptions have also been known to cause glaciers to collapse.

Anjal Prakash, research director and adjunct professor at the Indian School of Business who has contributed to U.N.-sponsored research on global warming, said that while data on the cause of the disaster was not yet available, “this looks very much like a climate change event as the glaciers are melting due to global warming.”

Note the dust clouds in the below images.

Landslides continue in the area.

(51328)
$17.62 (as of May 16, 2022 22:17 GMT -04:00 - More infoProduct prices and availability are accurate as of the date/time indicated and are subject to change. Any price and availability information displayed on [relevant Amazon Site(s), as applicable] at the time of purchase will apply to the purchase of this product.)