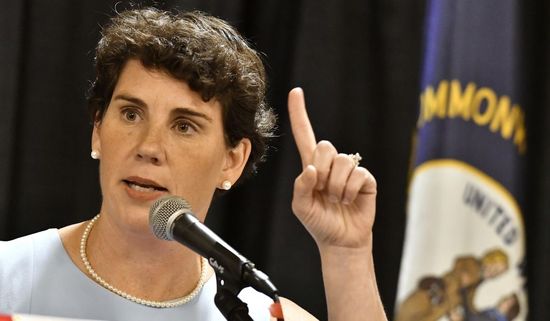 Recently, I wrote to you to say that we have an opportunity to retire Senate Majority Leader Mitch McConnell by helping to elect Amy McGrath in Kentucky. Now, I want to double down on that message.

This Senate has proven that it is not capable of leading this nation, and that it cannot be trusted to put country before party. Just minutes ago, the Senate voted to refuse to hear from any other witnesses, including former National Security Advisor John Bolton and other key officials.

This vote came despite the consistent White House policy of refusing to cooperate with the House impeachment investigation or to permit crucial witnesses to testify about the many transgressions that have put our national security at risk. The final impeachment vote is expected next week.

That is one of the many reasons why CLW is proud to endorse these four challengers who are seeking to oust Republicans, including three who just voted with Trump.

Amy McGrath (D-KY) is directly taking on Senate Majority Leader Mitch McConnell, who pulled the strings to coordinate a witness-free trial. McConnell is also the least popular Senator in the country and the master of partisan gridlock. McGrath, a decorated former military officer, has been outspoken in support of the Iran nuclear deal, and details her thoughts on North Korea and Iran on her campaign website.

Former governor John Hickenlooper (D-CO) is running against one of the most vulnerable Republican Senators, first-term Sen. Cory Gardner, in what political experts rate as a toss-up race. Hickenlooper cares deeply about nuclear issues, having joined the nuclear freeze movement in the 1980s.

Sara Gideon (D-ME) is in a close contest against Sen. Susan Collins, who has disappointed progressives with her position on impeachment, even though she voted for additional witnesses today. Gideon is passionate about arms control, and we know she would be a great ally and advocate for our cause.

Cal Cunningham (D-NC) is running against the very vulnerable incumbent Sen. Thom Tillis. Tillis has a low approval rating in the state, and polls show a close race. Cunningham is an Army veteran of Iraq and Afghanistan, business leader, lawyer and former legislator. He will be an active supporter of our issues in the Senate.

The American people deserve a new Senate majority, and we believe that Amy McGrath, John Hickenlooper, Sara Gideon and Cal Cunningham can win in November and produce a new, progressive Senate.

The fight for the Senate is on. Please consider generous donations to their campaigns for a better Senate.

(43136)
$0.00 (as of May 20, 2022 04:13 GMT -04:00 - More infoProduct prices and availability are accurate as of the date/time indicated and are subject to change. Any price and availability information displayed on [relevant Amazon Site(s), as applicable] at the time of purchase will apply to the purchase of this product.)