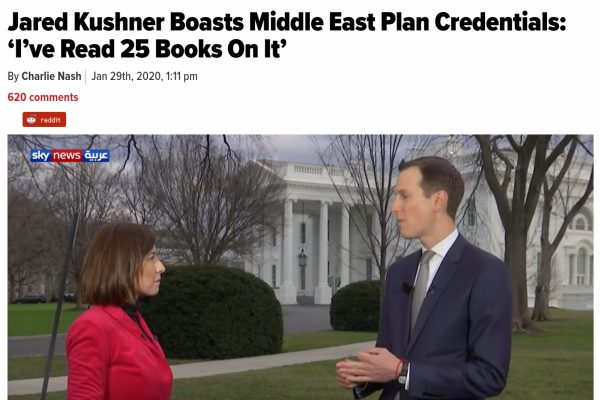 The next question is about bibliography, which 25 books?

Jared Kushner, Donald Trump’s son-in-law and the architect of his Middle East peace plan, said that he has read 25 books on the decades-old conflict as he defended the plan.

Mr Kushner’s interview comes in response to criticism of the Middle East plan, including – but not limited to – its total lack of input from Palestinian leaders, its proximity to the Israeli elections in March, and its defence of Jewish settlements that have roundly condemned as illegal under intentional law. The plan also hands the Jordan Valley over to Israel, which is home to 65,000 Palestinians and grants Palestinians access to the River Jordan, which feeds the fertile agricultural lands in the valley.

“What I would encourage people to do is try to divorce yourself from all of the history that’s happened over the years and read this plan.”

“I’ve been getting criticized for the last couple of years by all the people who have tried and failed for not doing this the same way they have, okay?”

“If somebody was successful I wouldn’t be dealing with this, and I wouldn’t have this additional responsibility to the other things I have. I think that people should try to be optimistic.”

— Jared Kushner, on the conflict in the Middle East

Hello! I’m a relative of your doctor, and I am here to perform your open-heart surgery.

To be very clear: Medicine is not my profession. I would describe it as more of a “recent hobby.” In fact, I have a lot more important responsibilities, and I’m a little resentful, frankly, that this has also been put on my plate! But someone has to do it. Yes, doctors are available. This hospital has an entire staff, including people who have dedicated their whole lives to learning as best they can about how hearts work. But I am here now. I almost never mention this, but I went to an Ivy League school. So.

Please lie back and stop attempting to struggle. In case you might worry that I am not qualified to perform this surgery: I read 25 books. So you are in good hands. No, I have not done this before, but in a way, that makes me actually more competent. When I look at you, I don’t see all the problems people saw before: an aorta, and ventricles, and the little tube thing that pokes out. I just see solutions. I am going to put your heart together in a way that has never been tried, but I can guarantee (I read 25 books) that it will make everything 100 percent better, using synergies.

Kushner: Palestinians Haven't Done Anything Right in Their Sad, Pathetic Lives: Kushner got on a call with Arab and Israeli reporters; put on his salesman cap saying his vision was 100% workable if Palestinians wouldn't be so Ã¢Â€Âœhysterical and stupidÃ¢Â€Â
Editedhttps://t.co/JOVxX03qC5

Also, a reminder that Jared Kushner is not qualified for his job and has no background in foreign policy but has still been working in the White House for more than three years.

Every professor know exactly which student Kushner is. Every last one of us. https://t.co/9CusexbQby