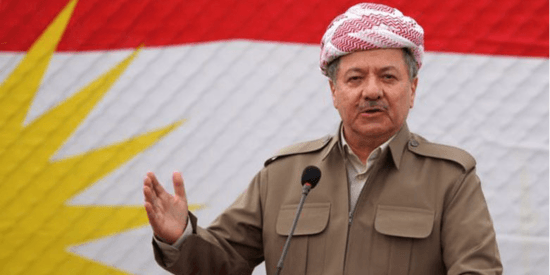 Yesterday, I posted a diary with a long (but still staggeringly incomplete) history of Kurdistan. Which brings us to more recent events…

When 2017 began, Iraqi Kurdistan was maybe the most-autonomous region in the world which was nevertheless not truly independent. Kurdistan had its own military, its own police force. It had the right to engage in some forms of foreign policy separately from its parent nation, including setting economic policy regarding foreign sale of its oil. But that isn’t the same thing as being a sovereign nation. The Iraqi Kurds were still beholden to the laws and policies of Iraq’s central government—a government increasingly influenced by Iranian Shiites, and increasingly focused on their interests. There was talk in Baghdad of cashing in on the Kurds’ oil revenues, for example, in part to support Iraq’s war against ISIS. The Kurdish military—the peshmerga—was of course waging their own war against the titular caliphate.

Not that Kurdistan is the picture-perfect image of democracy in the Middle East that the US media (and military) like to pretend it is when we’re selling them weapons to shoot ISIS with. Although ostensibly a two-party mostly-democratic system, in reality just about everything is currently run by the Barzani family. Readers of that history diary will recognize Mustafa Barzani as the military leader of the short-lived Republic of Mahabad. He’s a Kurdish cultural hero. The current head of the regional government, Masoud Barzani, is his son, and other relatives fill most important positions of leadership. There are significant questions about nepotism and corruption (oh really?). For his part, Masoud Barzani agrees that his government is flawed, and that it is not fully democratic, but that he’s doing the best he can under the current circumstances. And all of that glosses over the fact that the Turkish PKK is actually a terrorist organization (if, arguably, sometimes, sort of, justified… maybe), and that PKK members have roles in Iraqi Kurdistan. So, all told, YMMV.

April 2017 was probably when events really got pushed into motion. Administration of Kirkuk Province is disputed between the Kurdish government and the mainline Iraqi one. The Iraqis abandoned it to ISIS. The Kurds liberated it, and raised the Kurdish flag. It was re-integrated into Iraq proper, sort of, and the Iraqi flags went back up. Then, in March, after a local vote, Kurdish flags went up over the city alongside the Iraqi ones. But shortly after, in April, Baghdad decided to flex muscle, decreeing that Kirkuk was essentially no longer to be considered under Kurdish administration, that the Kurdish flag could not be flown alongside the Iraqi one in the province, and could not be raised over government buildings. This did not go over well (and is still very much unresolved). It was likely one of the main motivating factors for pushing up the timeline of independence.

On September 25th, the Iraqi Kurds held a referendum, not entirely unlike the one in Catalonia, to determine whether or not Kurdistan should be an independent nation, free from Iraq. Like in Catalonia, the central government declared the referendum illegal, because the (current) Iraqi constitution deems the country indivisible (and if you say it, it has to be true, right?). Turnout in Kurdistan was better than in Catalonia—around 70% of the eligible electorate—and about 90% supported independence, so it appears that an actual majority of voters backed the split.

And then, suddenly, the rest of the Middle East had to take it all seriously. Because, as that history diary demonstrates, pretty much all the neighboring countries have a vested interest in preventing the formation of an independent Greater Kurdistan.

Fairly quickly, Iraq suspended commercial airline flights to and from Kurdistan, shutting off the would-be country from air travel. They threatened to subdue the breakaway region by force. Meanwhile, Iran declared that a free Kurdistan would be a “second Israel” (in some senses, that’s not entirely wrong…), moved a line of tanks to the border crossing, and agreed to a series of joint military exercises with Iraq. And Turkey, who really doesn’t want to see an independent Kurdish anything, intimated that they would shut off the Kurds’ oil pipeline, which passes through Turkey. If starting a new nation is tough in the modern era, that goes double when your would-be country is landlocked. For several days, it seemed very, very likely that a theater-wide hot war in the northern Middle East was imminent. US media… barely noticed. Go figure.

There were (and still are) some signs of hope. The Iraqis have made a lot of showy troop deployments, but haven’t done anything on the ground. The Kurdish take on the situation is that they simply lack the military strength to try it, and they might not be wrong. Meanwhile, Iran has unquestionably military prowess, and really does have a line of tanks parked at the border… but didn’t even close that border; most civilian traffic continues to pass through unabated, just like it did a month ago, except that the scenery is more tank-y now. And the Turkish government, perhaps realizing that shutting down the pipeline would economically cripple Kurdistan… but also cost its own country $8-9 billion, has done nothing concrete at all. Within the last couple of days, the commercial airline restriction has even been partially lifted (all flights to Kurdistan are currently required to route through Baghdad). Perhaps most critically, Iran’s Ayatollah Ali al-Sistani issued a statement critical of the idea of an independent Kurdistan, but nevertheless calling for dialogue between Baghdad and the Kurds, and explicitly including concern for Kurdish rights. That’s… frankly unprecedented in the modern politics of the region.

But on the other other hand, Iraq just cut off Kurdistan from the Iraqi banking industry (including banning all US dollar transactions), and Iran has stopped purchases of Kurdish oil. It seems very likely that the Iraqi government does not have unified leadership behind its varied responses, which is not surprising given the structure of politics in Baghdad. More worryingly, Erdogan just met with Iranian President Hassan Rouhani to announce that their respective nations would work together to establish economic sanctions against Kurdistan and prepare for joint military action. At the joint press conference, Rouhani stated that “the independence referendum in Iraq's Kurdistan is a sectarian plot by foreign countries and is rejected by Tehran and Ankara” (for the record, you’re intended to read “foreign countries” as “Israel” in that quote). Which doesn’t really inspire confidence in a negotiated peaceful solution.

Oh, and I should note that the only country in the world to have already officially recognized Kurdistan as an independent nation is Israel, because apparently the Israeli government feels that offering Kurdistan maybe the worst optics possible is the best way to involve themselves in regional affairs?

So, what happens next? Well, if I had the ability to accurately predict events in the Middle East, I’d form an advisory think tank and retire on the giant buckets of money I’d earn. It is really in everyone’s best interests if the military tensions in the area sort of fizzle out, and Baghdad and the Kurds negotiate some sort of compromise solution where Kurdistan enjoys even more autonomy, while Iraq still gets to keep all its territory intact, at least as far the mapmakers are concerned.

But there are a lot of ways this could go wrong, both now and in the near future. In the immediate future, Iraq (or Iran) could make this a military issue, or could impose enough blockade-style trade barriers so as to force the Kurds to make it a military issue. Turkey could still do something dramatic, because Erdogan is not, shall we say, real big on subtle political gestures. The situation in Kirkuk Province is not at all resolved, and there is a ton of oil money at stake there. Further down the road, it seems likely that the Syrian Kurds might want to get on board with an independent or quasi-independent Kurdistan. That’s unpleasant because it has the potential to start a great powers proxy war (Russia backs Assad, who wouldn’t tolerate secession; we back the Syrian Kurds… most of the time).

Peace is going to require a lot of compromise and depends on cooler heads prevailing among governments conditioned to be each others’ enemies. War just takes one bad actor making a stupid enough choice to set it all alight. After all, this is the Middle East.

A: Russia is always involved. But if the question is “is this a Putin plan for regional disruption?”, then almost certainly not. There are certainly Kurdish-Russian ties. The previous Kurdish nation, back in the 1940s, was, to some extent, a Soviet play for regional influence. Mustafa Barzani spent a decade or so in exile in the Soviet Union afterward. On the other hand, Moscow has also had a close relationship with Baghdad dating back to the 1950s.

Publicly, the Russian policy seems to be to support a unified Iraq. In part, that’s almost certainly because Syria (the Assad version of it, anyway) and Iran really are Russian allies in the region, and neither of them wants to see Iraq partitioned off. But Russia has also been investing in commercial development in Erbil, and a Russian official there, back in August, said they would “support the decision made by the people of Kurdistan because it is a decision through referendum.”

Bottom line: This one is not a Thing Putin Did, or even one where he’s directly encouraging separatism.

Q: Is the US involved?

A: Well, the postwar Iraqi government is the end result of a godawful terrible series of decisions made by the US government and military. And the Kurds have us to credit for a good share of their current military strength. Officially, we support a unified Iraq; we built that (such as it is), so we really couldn’t not back it. But we officially claim the Kurds as an ally in the War Against ISIS, or whatever we’re calling it these days, so we can’t just throw them under the bus.

Bottom line: The US is almost certainly going to say nice things about Baghdad and how important it is that Iraq stays one big happy country. Unless the Kurds look to conclusively establish an independent nation, at which point we’ll probably find a new stance to take. In some respects, I hope the US media continues to just ignore the entire process, as that makes it less likely that Trump will say anything about it.