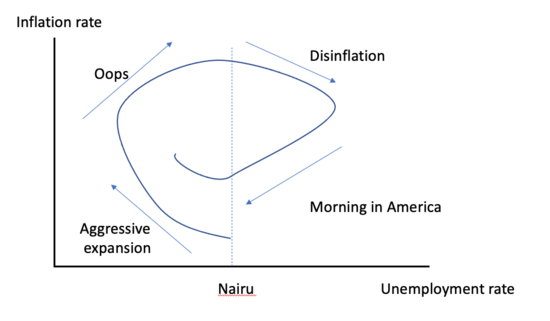 Let real wages (of $15+/hour) grow faster than labor productivity for some years, undoing the wage repression of the last decades.

We have been misled by neoliberal economics for now many decades, it’s time to turn many things around in what is becoming a second-rated US economy, recently crippled by the malevolent and narcissistic “king of debt”.

In economics, stagflation or recession-inflation is a situation in which the inflation rate is high, the economic growth rate slows, and unemployment remains steadily high. It presents a dilemma for economic policy, since actions intended to lower inflation may exacerbate unemployment.

The biggest risk for the stock market in 2021 is inflation, according to Morgan Stanley. Unprecedented radical spending by the federal government and the Federal Reserve, to stave off a panic-induced market crash, helped artificially drive stocks to temporary new highs last year.

For some, the math bore out the possibility that exuberance was rational even if the economy is always more irrational than its math. “The Lucas fantasy of costless disinflation from credible commitments in an ergodic world of rational agents was decisively falsified long ago.”

The underlying problems of supply shocks related to Trumpian idiocy atop bailing out the banksters may have made the economy much worse. The pandemic has only made a bad situation worse, or made more of us myopic in our isolation. Paul Krugman has now taken the time to question the orthodoxy of stagflation. Darn economic orthodoxy being wrong since the 1970s.

Let me start with the inflation story the way most economists, myself included, have been telling.

In the beginning was the Phillips curve: the apparent tradeoff, fairly visible in the data, between unemployment and inflation. In the 1960s many people looked at that tradeoff, considered the mild costs of inflation versus the benefits of lower unemployment, and argued for monetary and fiscal policies aimed at running the economy hot.

But in a hugely influential speech Milton Friedman made an argument also independently made by Columbia’s Edmund Phelps: the unemployment-inflation tradeoff wasn’t real, because any sustained effort to keep unemployment low would lead not just to high inflation but to ever-accelerating inflation. They claimed, specifically, that people setting wages and prices would begin marking them up to anticipate future inflation, so that the inflation rate associated with any given unemployment rate would keep rising.

They predicted, in particular, that the course of the economy over time would look something like this:

But what if we’ve been telling the wrong story all along?

But suppose something like this is true. In that case, the narrative that saw stagflation both as the cost of excessively ambitious macroeconomic policy and as a vindication of conservative economic ideas was mostly wrong. And that matters not just for history but for policy right now, which is still to some extent constrained by the fear of a 70s repeat.

How do you ask someone to be the last worker to be unemployed for a mistake?

Unemployment might be able to get very, very low, as it did in 2019, without inflation going up very much as long—and this is the key part—the Fed emphasizes that it's committed to keeping inflation at 2 percent over the long term. Expectations really matter.— Matt O'Brien (@ObsoleteDogma) February 8, 2021

The reality in a response by Lance Taylor and Nelson Henrique Barbosa Filho is that “For practical purposes, the results mean that, for the Fed to meet its inflation target, it would be necessary to let real wages grow faster than labor productivity for some years, undoing the wage repression of the last decades. Biden’s $15 minimum-wage proposal is a correct step in that direction.” This is despite so many economists taking an opposite, more cautious position.

The model Krugman (2021) cites, originally due to Paul Samuelson and Robert Solow (1960), is at best incomplete and for practical purposes wrong. It makes sense to explore the reasons why.

There are two ways to analyze inflation. One was adopted by William Phillips (1958) in his empirical discovery of an inverse relationship between wages and the rate of unemployment for the UK, from the mid-19th century and early 20thcentury. This is a standard microeconomic specification,

with a negative (usually nonlinear) slope in the unemployment versus wage plane. For purposes of econometrics, one could always throw in lags, conditioning variables, and other methods to improve the statistical fit of (1), as well as do regional analyses, as Krugman mentions.

Following Taylor and Barbosa-Filho (2021), there is also a broader cost-based macroeconomic specification relying on the equality of gross domestic product (GDP) to gross domestic income (GDI). In stripped-down form it can be written as:

Since GDP equals GDI to within a “statistical discrepancy” and various “minor” flows ($100 billion or so) the breakdown given in (2) is built into American national accounts and can be used as a template for a macroeconomic cost function.

Krugman and the rest of the American economics profession prefer the version proposed by Samuelson and Solow (1960), who knew all about decomposition (2) but chose to replace it with

with a negative slope. They concentrated on unemployment as the key explanatory variable and ignored or downplayed the costs on the right-hand side of (2).

Huh, the big revelation is that the 70s stagflation had more to do with oil supply shocks than with “oh no we went too far with demand stimulus”? Was that not already the consensus? People need to read their MMT… https://t.co/5iPv3HeeYK— Big Worker (@Big_Worker) February 8, 2021

Stagflation is unlikely only because some things are less stable, while globally much needs to be fixed.

We’ve also prepared slides and a non-technical summary, which you can find here:https://t.co/74dizYPqAR https://t.co/i0JbmSQQSq

“This is the nature of economic bubbles: What seems to be irrational exuberance is ultimately a bad case of extrinsically motivated myopia”. Daniel Pink

@profwolff: “Wolff Responds: Wolff Critiques Krugman on the US Economy”

Prof. Wolff explains that the framing of the current economic crisis as a “natural disaster” is wrong. It's a failure of the economic system we have.#COVID19 #Economics #Capitalismhttps://t.co/dyTJjmKEev— Mitch🌹🍞☮️🏴🇵🇸✊🏽 #UnitedLeft (@dboon2024) February 6, 2021

No, GameStop wasn't a populist uprising. It was a pump and dump with a side of predatory trading https://t.co/1mU2O5dqj9

(32701)
$348.00 (as of May 16, 2022 00:13 GMT -04:00 - More infoProduct prices and availability are accurate as of the date/time indicated and are subject to change. Any price and availability information displayed on [relevant Amazon Site(s), as applicable] at the time of purchase will apply to the purchase of this product.)