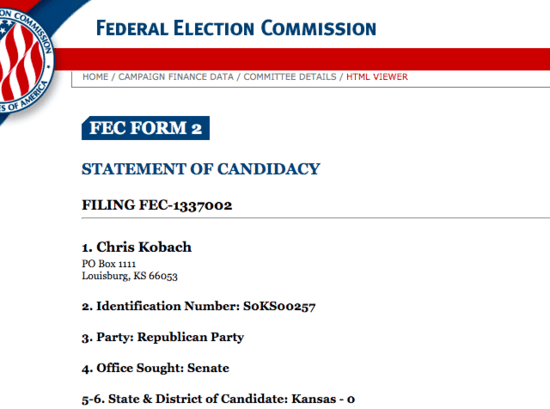 Well, Republicans elected a guy who body-slammed a reporter and another one who confessed to serial sexual assault. Why not a guy who can’t spell his own name?

In an FEC filing to officially kick off his run at a U.S. Senate seat, former Kansas Secretary of State Kris Kobach — who, ironically, would probably purge a voter for forgetting a period in her middle initial — spelled his name as “Chris Kobach.”

Why? There are a several competing theories, but by far the most compelling one is he’s a fucking moron.

He soon corrected it, but you can see why Donald Trump trusted him to weed out all that nonexistent voter fraud, right?

(33003)
$348.00 (as of May 19, 2022 06:35 GMT -04:00 - More infoProduct prices and availability are accurate as of the date/time indicated and are subject to change. Any price and availability information displayed on [relevant Amazon Site(s), as applicable] at the time of purchase will apply to the purchase of this product.)