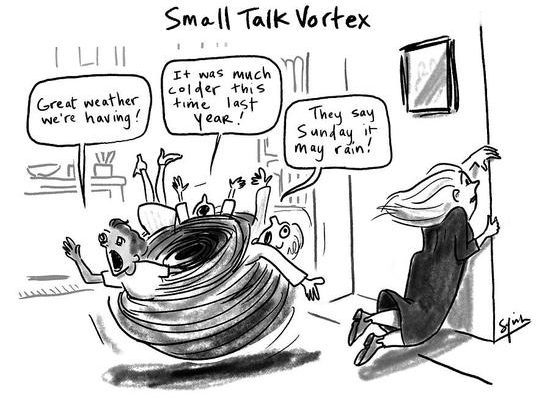 It was a tough day for democracy and the rule of law, so here’s something different on Cliches and Collective Nouns in the context of small talk.

The problem is that most discourse does devolve to what might seem small talk, made worse by social media and iconic short hand like emojis. I’d like to be clever in such situations but people get easily offended because of the probability of micro-aggression. Dinner parties are better since usually everyone is generally more comfortable together, but some of us are generally too shy to even feign gregariousness in larger-scale get-togethers.  Balancing the unimportance of topics while managing interaction is important, especially with managing issues of intimacy or first impressions. The worst versions are those who use conversation to make monetary profit or at least develop social capital, beginning with one-to-one, dyadic conversation. As in this linked example, mediated by a cup of coffee.

Small talk is an informal type of discourse that does not cover any functional topics of conversation or any transactions that need to be addressed.[1] In a nutshell, it is a polite conversation about unimportant things.[2]

The phenomenon of small talk was initially studied in 1923[3] by Bronisław Malinowski in his essay “The Problem of Meaning in Primitive Languages”,[4] who coined the term “phatic communication” to describe it.[5] The ability to conduct small talk is a social skill; hence, small talk is some type of social communication.

In spite of seeming to have little useful purpose, small talk is a bonding ritual and a strategy for managing interpersonal distance.[6] It serves many functions in helping to define the relationships between friends, colleagues, and new acquaintances. In particular, it helps new acquaintances to explore and categorize each other's social position.[7]

Small talk is closely related to the need for people to maintain a positive face and feel approved of by those who are listening to them. It lubricates social interactions in a very flexible way, but the desired function is often dependent on the point in the conversation at which the small talk occurs:[8]

And yet we’re judged by our use and misuse of cliches, even as small talk strategy we have to use them to fill space or to initiate or close conversations.

(22298)
$179.00 (as of May 18, 2022 23:34 GMT -04:00 - More infoProduct prices and availability are accurate as of the date/time indicated and are subject to change. Any price and availability information displayed on [relevant Amazon Site(s), as applicable] at the time of purchase will apply to the purchase of this product.)