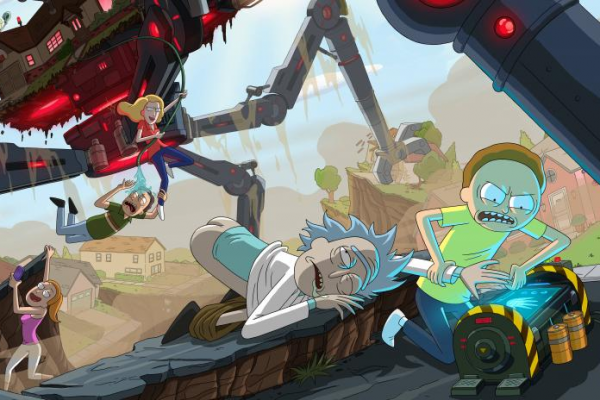 There’s a lesson here, somewhere… Season Four of Rick and Morty has arrived at Adult Swim on TV, reminding me of adolescence, hoping for interplanetary travel within my lifetime. Darn that eschatology. Probably why animation remains interesting for me, if only because Rick and Morty (R&M) allows for more rapid cinematic visualization. I try to ignore the lack of Bechdel-test writing and focus on the cultural and structural experimentation. It is after all, still genre film-making, and I won’t waste time with Comic-Con drama.

Science fiction, especially on TV convinced me that science would bring us much farther by the time I became an adult. Unfortunately, the contemporary history of the late 20th Century convinced me that a future in the aerospace industry would be forever constrained by its political economy, no more majoring in physics. Geospatial information science came later.

Science fiction should have also made that dissonance clear to me, considering that utopian/dystopian narratives tended to determine the technologies in most of those stories. Even the images from the Moon were CGI, just so much more inefficient than the graphics of Avatar until the advent of micro-computing.

I then continued through my career with always keeping my politics sub rosa, knowing that being too openly leftist in environments which tended to the conservative would probably detrimental. It got worse when I had more conservative work environments.

Even as I’ve lived and worked in blue states, my environments tended to the red. I’m just too damn polite to folks in those unfortunate everyday encounters with Trumpists and their progenitors, although I may start wearing my Harris baseball cap. Oooo wee.

This R&M season has references to universes that have lapsed into fascism as corresponding to act breaks, so there’s that set of messages. I don’t expect any references to the current POTUS* in the remaining 60 episodes, if only because he may be a historical aberration, aside from Rick trying to clone a Lincoln/Hitler, because he “wanted to create a morally-neutral super-leader”. Then again this dimension is only C-137, and everyone eats Cronenberg monsters (recipe below).

Many episodes are structured with use of a story circle, a Harmon creation based largely on Joseph Campbell's monomyth, or The Hero's Journey. Its two-act structure places the act break at an odd location in the stages of the monomyth: after The Meeting with the Goddess, instead of Atonement with the Father.[28] Roiland has stated his and Harmon's intentions for the series to lack traditional continuity, opting for discontinuous storylines “not bound by rules”.[34]

He has also confirmed that the writers avoid revisiting old tropes from the show's past, “in fear of that coming off as disingenuous fan service.”[35] In producing the series' first season, episodes were occasionally written out of order. For example, “Rick Potion #9” was the second episode written for the series, but was instructed to be animated as the fifth, as it would make more sense within the series' continuity.[23]

For example, I avoid fan sites but here’s how time-wasting that subculture can be as one small detail, a photo of Rick holding baby Morty in Bird Person's house, generates masses of fan speculation that is futile considering the R&M authors’ writing style tending toward the odd plotline.

The fan theory lays out an elaborate scheme for revenge as plotted by original C-137/Evil Morty. The theory goes that C-137 was brought up by Rick (sans Jerry) and is therefore far more intelligent than his Morty brethren. He builds his own portal gun, hell-bent on revenge because Rick C-137 abandoned him after they started to clash intellectually.

As fan theories go it's pretty intricate, but the plotting in Rick and Morty is exactly that – intricate. The writers manage to tie together separate and seemingly absurd plotlines to make points about sensitive issues like therapy, inequality and discrimination.

What’s more disturbing is that there’s a bunch of online R&M pr0n. I leave that to your own exploration.

How Chaos Chaos’ Feminist Synthpop Ended Up On ‘Rick And Morty’

Chaos Chaos doesn’t have a career arc that you can trace from album to album. For one, the synth-pop sister act hasn’t yet released a full LP under this band name — that won’t happen until early next year. For another, their major turning points have been marked not by stylistic shifts, but by animated TV shows. “We can’t keep them away, what’s up with these cartoons?” wonders Asy Saavedra, the band’s singer and keyboardist, on the phone from Los Angeles, where she and her sister Chloe now reside. “We’re like the least likely band to be involved, that’s probably why. I think a bunch of Rick And Morty fans are confused.”
uproxx.com/…

I found something R&M related, but perhaps more troubling than some of the recipes we’ve looked at:

The word/name Cronenberg is a reference to Canadian filmmaker, screenwriter, actor, and director David Cronenberg. This is due to the fact that Cronenberg is one of the originators of the “body horror” genre in which the style of filmmaking explores people's fears of bodily transformation and infection.

Some people say to never judge a book by its cover, but I'm doing doing that with this recipe.

Yep, that looks like human skin full of chopped-up organ meat. It looks like a dish served in a hallucination a character is having in a David Cronenberg movie. These are apparently “cup steak puddings.”

The recipe itself was the product of a corrupted, fragmented mind. It called for water, but never said how much. Some ingredients listed were never used, while others weren't listed but then mentioned as being needed halfway through. It was complicated and ever-changing, with little-to-no direction. It was as if walking through Denver International Airport was a recipe. And served the same-quality food.

The crux of the recipe was suet (aka cow kidney fat, which I will note is these days primarily used as bird feed), but I still had hope, because some of the ingredients were normal things like flour and baking powder. Then they were combined and poured into cups and … oh no.

It's greasy, fatty pudding that makes you retch when it's within smelling distance. It's true today, and I refuse to believe it wasn't true back when this recipe was written.