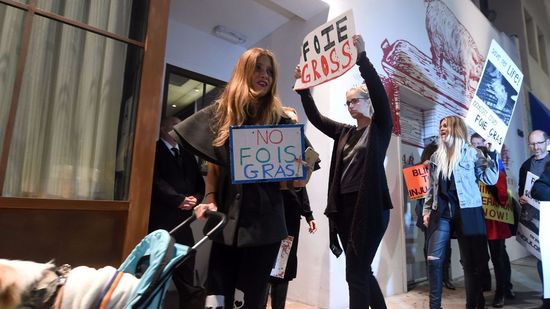 Someone else’s foie gras is always more problematic, and stressful for all involved.

Foie gras is a popular and well-known delicacy in French cuisine. Its flavor is described as rich, buttery, and delicate, unlike that of an ordinary duck or goose liver. Foie gras is sold whole, or is prepared into mousse, parfait, or pâté, and may also be served as an accompaniment to another food item, such as steak. French law states that “Foie gras belongs to the protected cultural and gastronomical heritage of France.”[5]

Gavage-based foie gras production is controversial, due mainly to the animal welfare concerns about force-feeding, intensive housing and husbandry, and enlarging the liver to 10 times its usual volume. A number of countries and jurisdictions have laws against force-feeding, and the production, import or sale of foie gras; even where it is legal, a number of retailers decline to stock it.

The making of foie gras, which is considered a rare delicacy, has come under fire by animal-rights activists, claiming the practice of force-feeding ducks and geese is inhumane.
According to Reuters, farmers in France, where 70 percent of the world’s foie gras is produced, are upset with California’s ban on the product. Violating the law could cause a $1,000 fine.
One farmer in France told Reuters that he was not harming the animals by fattening their livers. www.thedenverchannel.com/…

The term ethical foie gras or humane foie gras is also used for gavage-based foie gras production that is more concerned with the animal’s welfare (using rubber hoses rather than steel pipes for feeding). Others have expressed skepticism at these claims of humane treatment,[81] as earlier attempts to produce fattened livers without gavage have not produced satisfactory results.[82]

A more humane version of foie gras was pioneered in the Spanish region of Extremadura, whereby the bird is tricked into preparing for migration rather than force-fed.[83]

It’s always someone else’s liver, and the outcome is always offal.

The brain processes information about death as something more likely to happen to others than ourselves, the authors of a study due to be published in the journal NeuroImage told The Guardian.

When we are faced with the prospect of passing away, our brain activity appears to change in order to shield us from the existential threat, the researchers wrote in their abstract.

Scientists think our brains protect us from our mortality: "The brain does not accept that death is related to us" https://t.co/NafJVE0WUD

Study co-author Avi Goldstein told The Guardian: “This suggests that we shield ourselves from existential threats, or consciously thinking about the idea that we are going to die, by shutting down predictions about the self, or categorizing the information as being about other people rather than ourselves.”

The goose is all of us. Untitled Goose Game is poignant because it’s surprisingly cathartic. “When deconstructed, all comedy seems to either directly or indirectly reference what is considered to be truthful or normal within its frame of reference,” the authors write. For some, a bratty goose on the loose is an all-too-perfect analogy for the chaos of world events. And being a Robin Hood–like goose could help people cope. As Todd Martens at the Los Angeles Times puts it: “I don’t enjoy playing as evil characters, so I decided my goose was fighting on the side of good.”

Players control a goose who bothers the inhabitants of an English village. The player must use the goose’s abilities to manipulate objects and non-player characters in order to complete specific objectives and make progress through the game

Set in an idyllic English village, Untitled Goose Game sees players control a goose which can honk, run, flap its wings, and grab objects with their beak to bother various human villagers. The village is split up into multiple areas, which each have a to-do list of objectives to accomplish, such as stealing certain objects or tricking humans into doing certain actions. When enough of these objectives are cleared (one less than the total amount present), an additional objective is added which, once cleared, allows the goose to move onto the next area. After completing four areas, the goose enters a miniature model of the village. There, the goose steals a bell before going back through the previous areas while the villagers try to stop them. In the game’s ending, it is revealed the goose had previously stolen many bells prior to the game’s events. There are also several hidden optional objectives, many of which require traversing between multiple areas or completing an area within a time limit.[1][2]

House House created a structure to the game using missions with specific targets similar to the assassinations in the Hitman series mostly as a joke.

Untitled Goose Game drew similar attention to Goat Simulator on social media, both sharing the nature of being animal-based sandbox-style games to create chaos in. After release, clips and stills from the game were shared virally on social media, and the game has become an Internet meme.[4][28][29]

Traveling seems quite like a goose game. Much like being tricked into migration. I’ve been to Singapore twice, and on the second trip decided that I would get a Singapore Sling at the site of its origin, The (original) Raffles Hotel. Stamford Raffles being the ‘founder’ of Singapore.

Not really being a gin drinker, it seemed fine because it is about the bar surroundings and made the Tiffin, more tasty. The remodeled hotel is now a Qatari financed project.

Take a look inside the newly reopened Raffles Hotel in Singapore https://t.co/iAaeT1XL0C

Raffles, which hosts a grand reopening festival on Friday following an extensive renovation that brought the icon into the 21st century, has hosted everyone from Somerset Maugham and Rudyard Kipling, to Elizabeth Taylor and King Edward VIII (the monarch who abdicated the British throne to marry American divorcee Wallis Simpson). From humble beginnings in 1887, it now houses a variety of restaurants, bars and numerous upscale shops, in addition to its luxury suites.

The ultimate emblem of the hotel’s place in history is the Singapore Sling. Bartender Ngiam Tong Boon created the cocktail here in 1915. Guests willing to brave the lines of tourists can enjoy one at the famous Long Bar. And if you’ve had a Singapore Sling elsewhere and didn’t like it, it’s still worth trying this one—it’s far better than most iterations. If you really love the fruity concoction, the hotel even offers a masterclass in how to make them.

(51650)
$17.62 (as of May 21, 2022 11:06 GMT -04:00 - More infoProduct prices and availability are accurate as of the date/time indicated and are subject to change. Any price and availability information displayed on [relevant Amazon Site(s), as applicable] at the time of purchase will apply to the purchase of this product.)