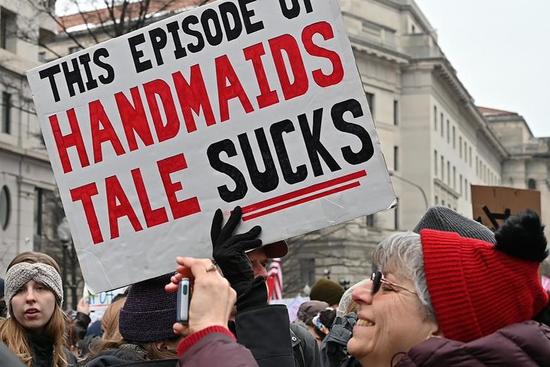 Is it better to read or sit in a corner and think about what you have done.

It does seem strangely logical that the state of Kansas would ban The Handmaid’s Tale as an “obscene material” that needed to be sequestered in a prison library. Or maybe they think it’s a “self-help” book.

Darn those media effects. It still remains for a real discourse about prison reform to occur under a PIC where incarcerating immigrants is a profit-center. Banned books in prison are a symptom that replicates itself in schools.

The state of Texas has an official banned list of over 10,000 banned books, and public reporting has indicated that the list may now include over 15,000 titles.

Florida has a list of over 20,000 banned books. The nonprofit organization Books to Prisoners has noted that this list includes “Klingon dictionaries [and] a coloring book about chickens.”

Kansas has had a list of over 7,000 banned books, including “self-help books,” as well as “bestselling literary works, such as Margaret Atwood’s The Handmaid’s Tale.”  After the Human Rights Defense Center obtained and published the list in May 2019, the acting secretary at the Kansas Department of Corrections announced that he would abolish the list and replace it with a new policy for reviewing obscene materials.

While the specific rules vary from state to state, prison officials generally have broad latitude to ban books based on their content, including the prerogative to develop their own rationales for why a book should be blocked.They usually do so on one of several grounds:

• Depictions of violence or language perceived to encourage it

• Depictions of criminal activity or language perceived to encourage it

• Depictions of escape or language perceived to encourage it

• Encouragement of “group disruption” or anti-authority attitudes or actions

For purposes of this brief, we refer to these types of bans as content-based. While all these categories may encompass areas of legitimate concern, they can be—and in practice often are—construed so broadly that they essentially serve as convenient justifications for arbitrary bans. Further, prison officials are allowed to block books even outside these categories so long as the text is “detrimental to the security, good order, rehabilitation, or discipline of the institution.”  This type of provision grants officials substantial leeway.

A challenged book is one that is sought to be removed or otherwise restricted from public access, typically from a library or a school curriculum. This is a list of the most commonly challenged books in the United States. It is primarily based on data gathered by the American Library Association's Office for Intellectual Freedom (OIF). The OIF gathers their data from media reports from reports from librarians and teachers.[1]

In 2018, more than half the books that drew complaints did so because they contained LGBTQIA+ content. https://t.co/yqS2APhso0 via @CNN #BannedBooksWeek #LGBT

These 11 are the most-challenged books of 2018:
“George,” by Alex Gino
This children's novel made the list because it features a transgender character, according to the ALA.
“A Day in the Life of Marlon Bundo,” by Jill Twiss, illustrated by E. G. Keller
The American Library Association reports LGBTQIA+ content, political and religious viewpoints are among the reasons why this book was challenged.
“Captain Underpants” series, written and illustrated by Dav Pilkey
This book made the list because it includes a same-sex couple, which those calling for the ban perceived as encouraging disruptive behavior, the ALA said.
“The Hate U Give,” by Angie Thomas
Thomas' debut novel, written as a reaction to the police shooting of Oscar Grant, includes drug use, profanity and sexual references, which are reasons it was challenged. It was also deemed “anti-cop,” according to the ALA.
“Drama,” written and illustrated by Raina Telgemeier
This graphic novel is on the list because it features LGBTQIA+ characters and themes.
“Thirteen Reasons Why,” by Jay Asher
A novel turned Netflix series centers around teen suicide, which is the reason the ALA said it made the list.
“This One Summer,” by Mariko Tamaki, illustrated by Jillian Tamaki
A coming-of-age story is illustrated in this graphic novel and was banned or challenged because of certain illustrations and because it includes profanity and sexual references.
“Skippyjon Jones” series, written and illustrated by Judy Schachner
A Siamese cat takes center stage in this children's picture book. It made the list due to its depiction of cultural stereotypes, the ALA said.
“The Absolutely True Diary of a Part-Time Indian,” by Sherman Alexie
This novel was challenged or banned due to its inclusion of profanity, sexual references and its religious viewpoint.
“This Day in June,” by Gayle E. Pitman, illustrated by Kristyna Litten

In other forms of sequestration, we saw the moving of POTUS* call transcripts to a code-word classified server.

There was nothing classified in that call. We all read the transcript. There is such a thing as facts. The WH abuses the classification to cover up TrumpÃ¢Â€Â™s corruption. https://t.co/A3BPdb8XvC

On a lighter note: cute liddle(sic) guys with the bite strength of a black bear.

ItÃ¢Â€Â™s #SeaOtterAwarenessWeek! You know what that means. ItÃ¢Â€Â™s going to be all otter, all the time, Twitter fans! This week is held every year in September to put a spotlight on the world of sea otters & to highlight ongoing conservation efforts! #SeaOtterWeek. Ã°ÂŸÂ“Â·Ron Eby pic.twitter.com/NQdcvqo1Cm

(32937)
$348.00 (as of May 18, 2022 02:20 GMT -04:00 - More infoProduct prices and availability are accurate as of the date/time indicated and are subject to change. Any price and availability information displayed on [relevant Amazon Site(s), as applicable] at the time of purchase will apply to the purchase of this product.)