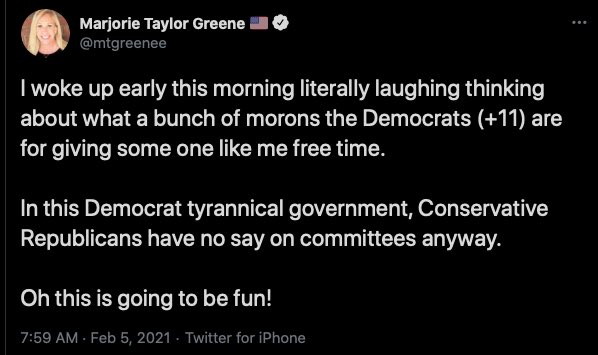 'GQP' – Republicans announce themselves as a Trumpist party

We cannot ignore the growing threat of right-wing extremism and its enablers any longer.

“McCarthy claims he has received private assurances from Greene that she no longer wishes death on Pelosi.“ -Washington Post

It remains problematic yet normal to expect that the US would have a lower death toll from a coup attempt because the regular US military’s reluctance to support it while the capitol was under assault. Add to that the possibility that the Capitol police may have been compromised along with the complicity of GOP Congress members.

But if the United States, the oldest democracy in the world, had a presidential system, how perilous could it be? Linz pointed to two sources of American exceptionalism. First, he thought the American people were “overwhelmingly moderate.” In the U.S. system, he wrote, “anyone who makes alliances or takes positions that seem to incline him to the extremes is unlikely to win, as both Barry Goldwater and George McGovern discovered to their chagrin.”

The key flaw of a presidential system is that it promotes rigidity and intransigence rather than a search for a middle ground with one’s adversaries. So reforms should target such all-or-nothing confrontations and promote compromise.
Reducing the stakes of controlling either the executive or legislative branch would be a step forward. As the judiciary’s power has expanded, for example, so have the consequences of nominating and confirming judges, particularly to the Supreme Court; this raises the premium that goes with winning the presidency, as well as controlling the Senate. The much-discussed proposal to limit justices to 18 years on the Supreme Court, staggered so that a vacancy occurs every second year, would reduce the stakes of high court appointments, cooling the attendant politics during elections and in the day-to-day operation of the Senate. Some of the proposals by congressional Democrats to strengthen oversight of the president — and punish executive-branch officials who participate in political activities — might also help rebalance the power arrangement between the two branches, reining in the imperial presidency.
The way we elect our legislators also encourages them to adopt extreme views. This was not always the case, but a series of developments — from demographic sorting (we tend to live near people who think like we do), to technological advances in the software used to draw electoral districts (which can worsen gerrymandering), to the nationalization of campaign fundraising networks — have aligned to reward politicians who cater to the wings of their parties. In districts that lean heavily blue or red, victory in a low-turnout party primary all but guarantees winning the general election, so the views of extreme voters carry more weight.

The Joint Chiefs of Staff were so intent on keeping the military out of the election and the transition that it didn't even follow its own contingency plans for defense of the capital. And then it stood in the way of the D.C. Guard being directly involved, foiling the last hope that someone would prepare.

Response to a threat everyone knew existed was further weakened by the status of three of the central national security officials: the Attorney General, the Defense Secretary, and the Secretary of Homeland Security. All were only “acting” in their jobs—unconfirmed by the Senate—and two were so new to their departments that they hadn't even met many of their own subordinates.

And what about the U.S. Capitol Police, a sovereign force of Congress and not even under Donald Trump's control? When Chief Steven Sund asked permission to request that the DC Guard be put on standby, he was told to informally seek help, to not go through the White House. His bosses were partisan too, beholden to the Republican majority in the Senate and answerable to an angry collective in the House.

And so when well over 100,000 Americans protested in Washington that day and as many as 1,000 forced their way into building, there were 9/11-like errors and blind spots that fed a preventable disaster. The 2,100-strong Capitol police didn't go on alert and didn't erect sufficient defenses, such was the denial that the usually over-cautious national security guardians displayed.

Imagine how bad it has to be for Mike Flynn to say this https://t.co/AqaFoqZ4nA

NEW: A group of 42 House Republicans sent a letter to Speaker Nancy Pelosi calling for the fencing around the US Capitol to be removed and National Guard troops to be sent home.

Finally, a man of the people, someone just like us, who finally did something for the The Forgotten People to alleviate their suffering and cushion the blow of offshoring https://t.co/hSAQpQwd7m

““For me, it does go back to my earliest days in national politics.” Hillary Clinton spoke to @michelleinbklyn about three decades at the center of right-wing conspiracy theories. https://t.co/FrlEA5rVep

🔥Trump’s Video at the Ellipse Is A Study in Fascist Propaganda AND An Example Of Weaponized Brainwashing🔥 https://t.co/74KHKM8BQG