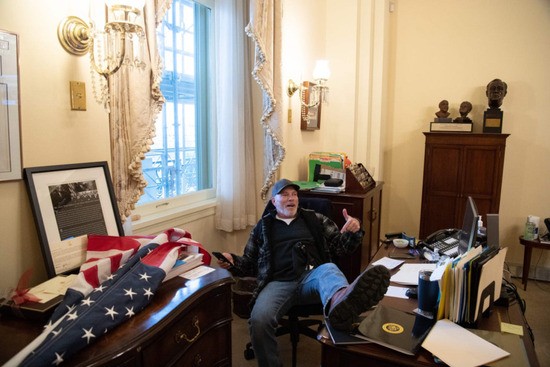 Okay, I’ve been sporadically watching the impeachment trial today. Sporadically, because watching the trial isn’t literally my job. I had other pressing matters to attend to as well.

But this is Josh Hawley’s job, at least for the moment—and, well, he doesn’t seem too interested in doing it.

You remember Josh, of course. He helped get this big plastic seditious-hamster ball rolling when he became the first U.S. senator to announce he would object to the certification of the Electoral College vote on January 6.

I don’t know about you, but if I’d done that, I’d be horrified right now. I might even wear sackcloth and ashes. Or a hair shirt. Assuming I could find those items at Goodwill, because no way am I paying through the nose for a Tommy Hilfiger designer hair shirt. It’s just not worth it. Old Navy makes a fine hair shirt that any American would be proud to wear—assuming they’re not Josh Hawley.

You see, Josh is special. He knows that being a Republican means never having to say you’re sorry. So earlier today he was chillin’ in the chamber as House managers presented the grisly details of the insurrection for which Hawley so eagerly greased the skids.

Republican Sen. Josh Hawley — who objected to Biden’s win and encouraged the Capitol attack — is currently sat with his feet up in the Senate gallery. Not once has he paid attention to the impeachment trial.— Hugo Lowell (@hugolowell) February 10, 2021

Josh Hawley is sitting in the gallery, not on the floor, “continuing to read papers in unmarked manila folders. They resembled the folders he had at his desk on Tuesday, but of course his being up in the gallery meant reporters in the gallery couldn’t see” in them — @kasie

It should be forever January 6th in how we view Josh Hawley, who has shown zero remorse or regret for instigating an effort to overthrow the US government. https://t.co/qD8WbXQ8mW

Breaking via MSNBC: Republican Josh Hawley is ignoring the trial reading stuff that has nothing to do with the impeachment… even sitting with his legs up on the seat in front of him.

Any guesses as to what Josh is reading? I hope it’s “Goofus and Gallant,” because God knows he could learn some manners. (In case you’re wondering, Josh, you are def Goofus.)

Also, get your fucking feet off the table. You’re not this guy, FFS:

Though, to be honest, there’s at best a tiny sliver of daylight between you two kindred spirits.

Enjoy the rest of the trial, Josh. Or the parts you manage to see through your wearied, bloodshot eyes, anyway.