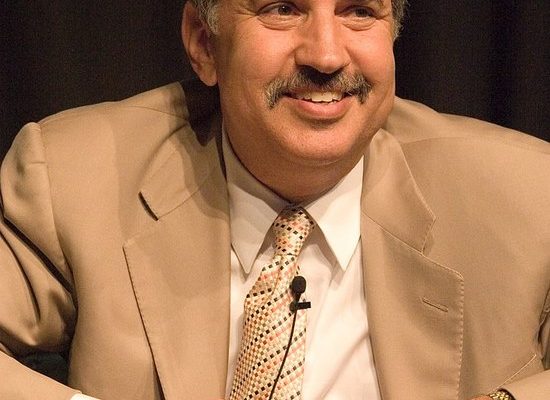 Not having listened to a random taxi driver, Thomas Friedman comes out for the anti-Bernie ‘radical middle’, because money talks at least for six months.

As Larry Diamond, editor of The Journal of Democracy, pointed out to me, several studies he’s been publishing show that the best way to defeat illiberal populism is not by trying to out-polarize the polarizer in chief but rather through broad, inclusive electoral strategies that pragmatically address the economic and social concerns of voters, including those who had previously voted for the populist.

That was the approach that enabled the secular opposition to defeat the party of Turkey’s autocratic president, Recep Tayyip Erdogan, in municipal elections last year in Istanbul and other cities. A similar depolarizing approach powered the victory of Greece’s liberal-centrist New Democracy party over the ruling left-wing populist Syriza in national elections last year.

You also do it by repeating every hour every day — with evidence — that Trump is out to destroy Obamacare through the courts, which means eliminating its coverage for pre-existing conditions, and only the Democrats will save it and improve it.

Yes, Sanders is also polling well against Trump, but the Trump machine has not begun to focus on him yet — it hasn’t begun bombing Facebook with ads about how Sanders honeymooned in the Soviet Union.

Sitting here today, Bloomberg — paired with a progressive vice-presidential candidate who can appeal to Sanders’s voters — has the best chance to carry the day.

In an age when political extremists go all the way, and moderates tend to just go away, Bloomberg has the right stuff — a moderate progressive with a heart of gold but the toughness of a rattlesnake — for what is going to be an incredibly big, brutal task: making Donald Trump a one-term president.

(Disclosure: Bloomberg Philanthropies has donated to Planet Word, the museum my wife is building in Washington, to promote reading and literacy.)

If for Friedman, Bloomberg is a “moderate progressive”, isn’t that synonymous to the oxymoron of “liberal socialists” that Nikki Haley calls Democrats.

For those of you too young to have experienced the years-long run of vapid pundit pablum that was the Ã¢Â€ÂœFriedman Unit,Ã¢Â€Â hereÃ¢Â€Â™s your primer. #neverforget #copolitics https://t.co/yTrnifqg5V