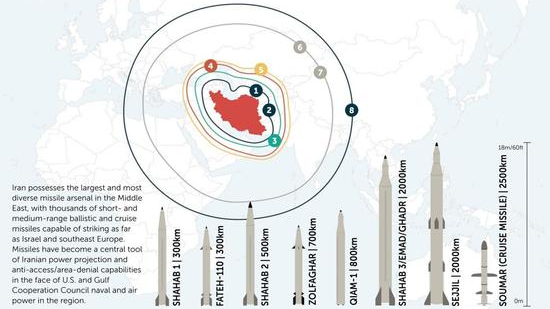 Two US military bases confirmed hit by at least 10 Iranian short-range ballistic missiles at this time. Irbil and Al-Asad bases hit. No casualties reported as yet. Updates as they occur.

From senior US military source in Iraq:
“Under missile attack from Iran. These are either cruise missiles or short range ballistic missiles. All over the country.”

1/2#IRGC Statement
Operation name: Martyr Solleimani
1/ we warn US for further moves, we'll go for more painful responses.
2/ We warn the governments who gave space and bases to US, wherever we get attacked from, we'll attack there! pic.twitter.com/uKmHCr5z5R

The Fajr-3 is currently Iran’s most advanced ballistic missile. It is a domestically-developed liquid fuel missile with an unknown range. What makes it Iran’s most advanced rocket is that the Iranian government says it has multiple independently targeted reentry vehicles (MIRV) capabilities. Its MIRV capability may give it the ability of avoiding anti-missile surface-to-air missiles (SAMs). The missile was last launched during Holy Prophet wargames, which was the IRGC’s largest naval war games ever. The Fajr-3 and the Fajr-3 artillery rocket are different systems.

Shahab-3 was the first Intermediate-range ballistic missile that was built by Iran’s military. Its first model, also known as Shahab-3A has a range of 1,300 km (810 mi). Soon after Iran came with a new model called Shahab-3B, which has a range of 2,000 km (1,200 mi), and can carry a heavier warhead. Making this missile was a major step in Iran’s missile industry, and it opened the way to longer-range missiles. Shahab-3D, which followed the Shahab-3C, is Iran’s latest Shahab model. A 2,000-kilometre (1,200 mi) range including Russia (as far as Moscow), Ukraine, parts of Hungary, Serbia, Greece, Egypt, Arabia, parts of India and China, as well as countries closer to Iran.

Jane’s Information Group said in 2006 that Iran had six operational Shahab-3 brigades, the first of which was established in July 2003. They said that the six brigades were mainly equipped with standard variants, but with others described as enhanced Shahab-3 variants, with ranges of 1,300, 1,500, and 2,000 km (810, 930, and 1,240 mi), respectively.[27] Anthony Cordesman at the Center for Strategic and International Studies however said only in August 2007 that ‘the air force of the IRGC is believed to operate Iran’s three Shahab-3 intermediate-range ballistic missiles units’ while noting that their actual operational status remains uncertain.[5]

It is believed to be an improved version of the Shahab-3, also known as the Ghadr-101. It has a liquid-fuel first stage and a solid-fuel second stage, which allows it to have a range of 2,000 km.[29] It has a higher maneuverability than the Shahab-3 and a setup time of 30 minutes which is shorter than that of the Shahab-3.

He told the gathering Basij militia during the manoeuvers they were holding that same week that the “construction of the Ashoura missile, with the range of 2,000 km (1,200 mi), is among the accomplishments of the Defence Ministry”.[30]

According to Jane’s Defence Weekly,[31] the Ashoura represents a major breakthrough in Iranian missile technology. It is the first two-stage MRBM using solid-fueled rocket motors instead of the existing liquid-fueled technology used on the Shahab. This would dramatically reduce the setup and deployment time for the missile and hence, shorten the amount of warning time for the enemy. Jane’s noted that while the development parallels Pakistan’s Shaheen-II MRBM there is no evidence to suggest there had been any prior technology exchange or with its other known technology partners such as North Korea or China.

“The President was given options and chose the most extreme in a way that looks impulsive and uninformed and not much thought going into consequences.” – Rep. @GerryConnolly reacts to President Trump ordering the killing of Qasem Soleimani. pic.twitter.com/YBC00Tt5Z1

As the US bizarrely attacks Iraq with threats of sanctions, Russia swoops in offering an air defense system along with support and solidarity. Another opportunity for Russia in the region at the expense of US unpredictability. https://t.co/tE0PDSx8T1