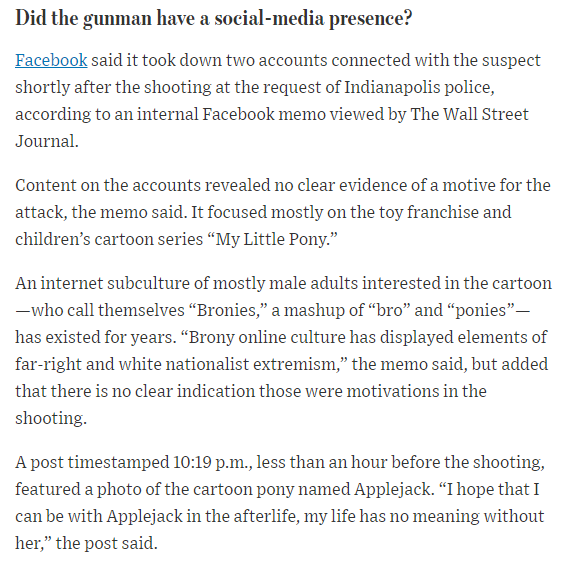 Apparently the spree killer in Indianapolis was also a “Brony”, a follower of My Little Pony as reported by the Wall Street Journal.

We are in our pandemic (l)anguish, even more confused by a sad shape for online culture. Not unlike the infantile imagery used by Boogaloo Boys, racism and sexism filter into the rationalizations for their actions, what some refer to as hyperstitions, or types of self-fulfilling prophesies.

Among the intersections are spaces colonized by those in need of help who also seek easy access to firearms, and are even deluded in some cases, by accelerationist political fantasies. Right-wing ironism manifest with cosplay situated in cartoon violence has taken catastrophic form in real life performative outrage.

A fan of the show “My Little Pony: Friendship is Magic”. Often male, but female fans are not uncommon. (plural: bronies) Bronies usually show a want to be accepted as normal people, but don't appear to realise that to be treated the same as anyone else, they need to stop making sure everyone knows and remembers that they are a brony at all times, without fail.

On the Indianapolis shooter being a brony and how admitting we lost the battle against extremism online is the first step in trying to meaningfully fix things.https://t.co/k9RPnQgItW pic.twitter.com/5zrnuAiL4Q

Over the weekend, the Wall Street Journal reported that the 19-year-old who killed eight people at a FedEx facility in Indiana last week was obsessed with My Little Pony Friendship Is Magic.

Shortly before carrying out the attack, the shooter wrote on Facebook, “I hope I can be with Applejack in the afterlife, my life has no meaning without her.” According to the internal memo from Facebook that the Wall Street Journal viewed, his account was full of content associated with the brony subculture. The Facebook memo describing the shooter’s account also reportedly mentioned how bronies are often associated with far-right ideology. It’s unclear how My Little Pony factored into the attack, if at all, of which four of the victims were Sikh.

On Saturday, Equestria Daily, one of the largest and oldest brony-based websites, wrote about the Facebook memo. “Facebook and The Wall Street Journal couldn't find any actual motive behind the attack from either of the pages; just ponies,” the post reads. “Be prepared for some potential blowback once the news starts breaking out into the wider internet. The Wall Street Journal did bring up the ‘far-right’ side of the fandom that caused a stir last year, though they could not find any correlation between the two.”

Following an excellent piece by Kaitlyn Tiffany in The Atlantic last summer, the entire internet began asking if bronies were racist, with many outlets framing it as some kind of Trump-era reckoning with race. But My Nationalist Pony was active as far back as 2011, less than a year after the show premiered. The violent white nationalist contingents of the brony community have been there since the beginning. And the toxicity of the brony community wasn’t just an online phenomenon either, there were reports of rampant racism and sexism happening at My Little Pony conventions as far back as 2012.

Breaking News: The gunman in the FedEx shooting legally bought two semiautomatic rifles months after a gun was seized from him over his mental state, officials said. https://t.co/V1khDJ9JAL