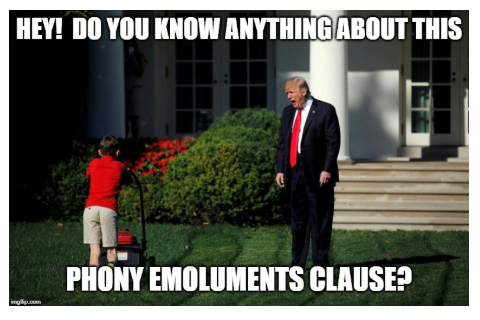 “You people with this phony Emoluments Clause,”

POTUS says economy doing “fantastically well.”
Median income, he says, rose $5,000.
“We need USMCA to be voted on. If it’s voted on it will pass.”
POTUS calls on Pelosi to bring it up
“This is something they can do very easily,” POTUS says of “Do-Nothing Democrats.”
Touts South Korea deal

On Hillary Clinton
“She’s accusing everyone of being a Russian agent.”
“These people are sick. There’s something wrong with them.”
Says Tulsi helped by accusation

Here's what Trump had to say about Hillary Clinton, Tulsi Gabbard and Jill Stein pic.twitter.com/Hzm05uEe3j

Touts low unemployment
“If you’re black, if you’re Hispanic, if you’re Asian, anyone”
More people working before than ever in USA

Syria
“We will be giving a much fuller report.”
“We’re having very good news coming out. The ceasefire’s holding.”
“Plenty of Turks have been killed because of conflict on their borders. You have to look at both ways.”
Criticizes pundits telling him what to do
“ISIS was all over the place…It was me…who captured them”
Criticizes Obama
“I’m the one who did the capturing. I’m the one who knows more about it than you people or the fake pundits.”

China is having “terrible year”
“The deal with China is coming along very well. They have to make a deal because their supply chain is going down the tubes.”
Troops moving out of Syria “very nicely”
“We never gave a commitment to the Kurds.”
Mocks person saying we’d stay with them forever
“They’ve been fighting 300 years.”
Not one drop of blood shed by American
“They haven’t cut a finger.”

"People have been trying to make this deal for years," Trump says nonsensically (fact check: https://t.co/CfP3nTnL91). After claiming the Kurds and Turkey have been fighting for "200 years," he promotes it this time to "300 years."

Impeachment inquiry
“They’re trying to make other people into Russian agents, Russian assets.”
“I had a perfect call.”
“I haven’t heard one Ukrainian say there was pressure…and the reason you haven’t heard it is there was no pressure.”
“[Adam] Schiff is a corrupt politician”
Whistleblowers “seemed to have disappeared”
“This is phony investigation.”

Notes victories in special election
“The media is corrupt also”
“Some great reporters, some great journalists, but some really bad people.”

On Turkey “misbehaving”
“I don’t think they will.”
Threatens tariffs
“Our powers of economics. It’s a great power.”

Limited troops in Syria?
“Not necessary”
Just secure oil
Separate arrangement with Israel and Jordan
“We never agreed to protect the Kurds for the rest of their lives.”
“We’re not going to take a position. Let them fight themselves.”
In the old days we’d call this area a demilitarized zone
“People have been trying to make this deal for years. We’re close to making it. We’ll see what happens.”

This may (may!) be what Trump has been talking about with his vague statements about taking control of “the oil.” https://t.co/Cfd1py5JkM

Why GOP must fight tough?
Dems are “vicious and they stick together. They don’t have Mitt Romney [in their midst.]”
Praises Rep. Will Hurd for saying he had heard no complaints from Ukraine

On whistleblower:
“Do we have to protect a whistleblower who gives a false account? I don’t know. You tell me.”
“It’s possibly Schiff.”
“Why didn’t he say he met with the whistleblower.”

“I’m trying to get out of wars. We may have to get in wars, too.”
“I have to fight off these lowlifes at the same time I’m negotiating these deals.”

Will you send troops home?
“Sending them home”
“That was our largest cheer in Dallas,” during rally
“I send many letters home to parents.”
“We have tremendous economic power…much better in a certain way [than playing with guns]

Doral
“I own a property in Florida”
“I would have given it for nothing.”
Touts giving up salary, says probably only George Washington did that, not Obama
“I’m very good at real estate.”
“Everyone in the G-7 would have had their own building.”
Security, next to Miami airport
“The Democrats went crazy, even though I would have done it free.”
Not for promotion, but no

Acting chief of staff Mick Mulvaney and press secretary Stephanie Grisham had said that Trump's company would provide the G7 "at cost" at Doral.

After Trump announced it would not be held at Doral, Trump started saying he would have provided it "free."

Trump, in the middle of a monologue about how George Washington was also a businessman while in office, cast baseless aspersions on Obama's post-presidency deal with Netflix. He then mocked the "phony Emoluments Clause," which is in the actual Constitution.

“You people with this phony Emoluments Clause”
Actually losing money
It’s cost me “between $2 billion and $5 billion”
Would do it again
“If you’re rich, it doesn’t matter.”
At rallies, sending records every place he’s been
“I can set a world record for somebody without a guitar.”

"I haven't had an empty seat at a rally," Trump said, though he has had empty seats at multiple rallies, then said he set an attendance record in Dallas, though he did not.

North Korea
“If somebody else became president with that mindset they had, right now you’d have war with North Korea.”
N. Korea would not take Obama’s call

On Doral:
“Well look at other locations.”
“I don’t think it will be as good.”

Will you be impeached?
“I think they want to.”
“Why would they want to impeach me? It’s so illegitimate.”
Mocks Rep. Al Green

“I think they want to impeach me because it’s the only way they’re going to win.”
Where’s 2nd whistleblower?
Says he respects security officials, one “bothered by Biden and his son”
Criticizes “Never Trumpers”
“They’re dying off”

“If I got elected on something and thought I was wrong, I would second-guess and change.”

Kudlow:
“This is a middle-class boom. I can’t emphasize that enough.”
Average real family income $65,000
“Better than anything our predecessors have done, be they Democrat or Republican.”
“Biggest gains are in the lowest quintile”
Household net worth up $12 trillion
Disposable income up 3 percent

Kudlow:
Housing market up, housing surveys up
“We are growing twice as fast as the rest of the world. The numbers are telling me we may be ready for another pickup.”
“Part of this is the regulatory story”
(POTUS interjects “true”)

EPA chief:
Touts repealing “The 2015 rule”
Property owner should be able to tell for themselves if they’re on a federal waterway
(POTUS interjects ethanol “fully approved,” talked with Sens. Ernst and Grassley)

Trade Rep Lighthouser:
Phase One of China deal will do by the time POTUS goes to Chile
(POTUS interjects on numbers negotiated with China and agricultural purchases, Phase Two will be easier
Japan also “buying a tremendous amount of ag” as a result of the new deal
Farmers and USA will be beneficiaries)

Azar
Approaching 3,000 generic drugs approved in Trump tenure
Largest decrease on drug prices in 51 years
“We’re getting the same kind of deals for American seniors that others in developed countries are having.”
(POTUS: “really speed it up,” referring to buying drugs from Canada)

POTUS:
“If I wasn’t elected, China right now would the biggest economy in the world.”
Points out they have 1.4 billion people, so “they have an advantage.”

He's more Queeglike today than ever before.

Everyone knows the quickest way to get out of wars is to put a bunch of US soldiers in Saudi Arabia https://t.co/lrQmmlxhBE

As the last U.S. troops pull out of Syria, an American soldier wears a YPJ emblem on his uniform as a sign of solidarity with the Kurdish ally they are leaving behind. (The YPJ is the women's unit of YPG, they fiercely fought ISIS).@akhbar pic.twitter.com/Z39964A2pO

(51660)
$17.62 (as of May 22, 2022 06:48 GMT -04:00 - More infoProduct prices and availability are accurate as of the date/time indicated and are subject to change. Any price and availability information displayed on [relevant Amazon Site(s), as applicable] at the time of purchase will apply to the purchase of this product.)