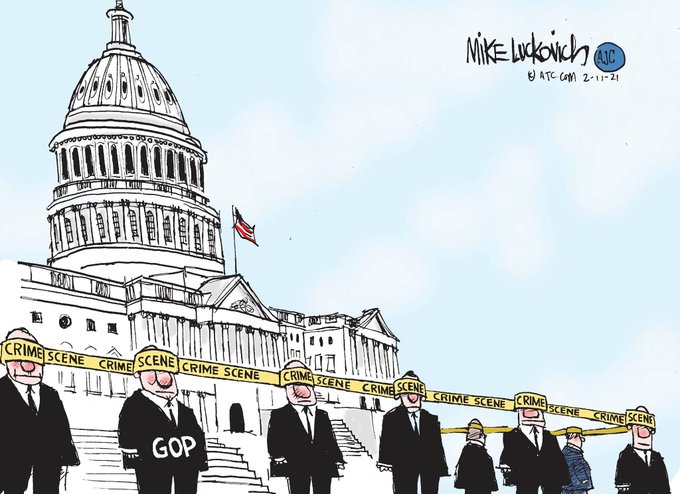 Riot declared at 1:49pm. Pence evacuated at 2:26pm. The count is now $3.5 million supporting the 6 January demonstration, up from the $2.7 previously reported. The approach by the House impeachment managers is to not hold the GOP jury members accountable, rather showing how Mitt Romney and VP Pence nearly got captured by the insurrectionists.

Newsmax host begins the 5 PM hour: “We have continuing coverage of a bipartisan betrayal of the American people…Let's watch the dagger plunge even further into the backs of we the people and this country”

The missing elephant in the room at Trump's trial: GOP radicalization. Dems are powerfully indicting Trump's extraordinary betrayal of our Constitution. But a huge part of the story — GOP complicity in all of it — is going untold. @paulwaldman1 and me:https://t.co/Xwg5SeWj1K— Greg Sargent (@ThePlumLineGS) February 10, 2021

…Democrats have made a strategic decision that if they refrain from implicating the GOP in Trump’s misdeeds, then some might be more gettable as votes to convict Trump.

But the result is this: At the highest-profile reckoning we’ll ever see into this months-long effort to overthrow U.S. democracy, a large part of the story simply isn’t being told. The role in this whole saga of the GOP’s ongoing radicalization, and its increasing comfort with anti-democratic tactics, openly authoritarian conduct and even political violence, is largely going unmentioned.
Whether they are saying so or not, the case the House managers are making most definitely does implicate much of the Republican Party. At every stage in all the corruption and misconduct the Democrats are documenting, Trump enjoyed essential support and even active enabling from the overwhelming majority of influential figures within his party.
An essential component of the Democratic case against Trump is that his assault on democracy began months before Jan. 6. As the managers graphically detailed on Wednesday, through much of the 2020 campaign, Trump lied that Democrats were in the process of stealing the election and that, if he lost, it would be an inherently illegitimate outcome.
This effort accelerated after the election, as Democrats also detailed. He filed frivolous lawsuits, spread bizarre conspiracy theories and even pressured election officials to corruptly change results in his favor. For weeks, he told his supporters the election had been stolen from them, and urged them to descend on the Capitol to set things right, which culminated in the violent insurrection.
Democrats are now making a powerful case that all this added up to perhaps the most grave betrayal of the Constitution ever perpetrated by a U.S. president. But if that is so, you must also conclude that members of the Republican Party amounted to a mass of co-conspirators in that betrayal.
www.washingtonpost.com/…
x

Reminder: Ted Cruz and Josh Hawley were complicit in this attempted coup. They knew there was no evidence of widespread fraud. They nonetheless lied to the public and objected to certifying electors. They must be expelled from the Senate.— Robert Reich (@RBReich) February 10, 2021

NEW: Trump's 2020 campaign kept paying organizers behind DC protests before the Capitol riots post-Election Day—totaling $3.5M+ in 2020 with its jfc—revealing even more connections as Trump's role in the rally is scrutinized at his Senate impeachment trial https://t.co/o4JD3kQTk6

A member of the far-right Proud Boys charged for his role in the riot at the U.S. Capitol blamed Trump for his conduct, claiming he was “misled by the president’s deception” https://t.co/kge5AYXs5f pic.twitter.com/3cGV9GoKYJ

In a legal move similar to a slew of other Capitol rioters, lawyers for “zip-tie guy” Eric Munchel insisted his actions were a direct response to months of comments made by former President Trump https://t.co/eVb9dtizK1

New footage shows Officer Goodman, who famously confronted a mob in the Capitol and used himself as bait to lure them away from lawmakers, encountering Sen Romney as he (Goodman) was sprinting to respond to the attack and redirecting him away from the rioters.

The evacuation of VP Pence, who mob was seeking pic.twitter.com/PoaXXkWnTf

The House Managers (impeachment prosecutors) are proving Trump’s guilt beyond a reasonable doubt. I, for one, don’t care about the outcome of the impeachment hearing. Donald Trump MUST be prosecuted in a court of law for his crimes against the US & We The People #JusticeMatters

Imagine going home to brag that you acquitted Trump of this. I truly cannot understand the mindset.