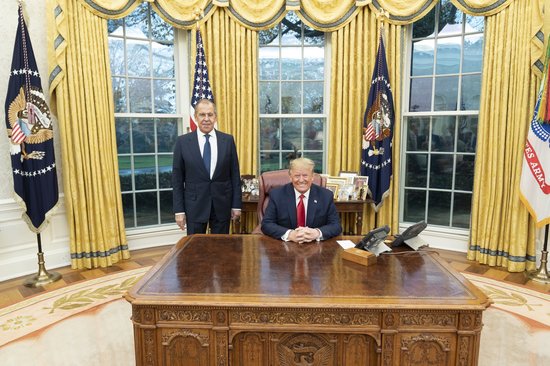 Of course nothing happened when Sergey Lavrov visited Trump even if they don’t agree on whether they discussed election interference.

Sometimes a picture doesn’t have to be worth a thousand words. Just a few will do. As Russian Foreign Minister Sergey Lavrov returned home from his visit with President Donald Trump in the Oval Office last week, Russian state media was gloating over the spectacle. TV channel Rossiya 1 aired a segment entitled “Puppet Master and ‘Agent’—How to Understand Lavrov’s Meeting With Trump.”

Vesti Nedeli, a Sunday news show on the same network, pointed out that it was Trump, personally, who asked Lavrov to pose standing near as Trump sat at his desk. It’s almost the literal image of a power behind the throne.

Russian state television still views the impending impeachment as a bump in the road that won’t lead to Trump’s removal from office. But President Vladimir Putin’s propaganda brigades enjoy watching the heightened divisions in the United States, and how it hurts relations between the U.S. and Ukraine.

The host, Vladimir Soloviev, smugly asked: “Should we get another apartment in Rostov ready?” Soloviev’s allusion was to the situation of Viktor Yanukovych, former president of Ukraine, who was forced to flee to Russia in 2014 and settled in the city of Rostov-on-Don.

Such parallels between Yanukovych and Trump are being drawn not only because of their common association with Paul Manafort, adviser to the first, campaign chairman for the second, but also because Russian experts and politicians consider both of them to be openly pro-Kremlin.

Today, he woke up and accused the Democrats of "Doing Nothing."

Last month, 47% of Americans supported impeachment and 46% opposed it.

This month, after rounds of public hearings, 48% of the country opposes impeachment, while 47% supports it, according to a new NPR/PBS NewsHour/Marist poll. https://t.co/8sf9owgsPl pic.twitter.com/uyFcV57oz7

Big get for Pelosi.

He was one of the most likely Dems to break away. https://t.co/6cEYjqqsqD

(43204)
$0.00 (as of May 20, 2022 09:30 GMT -04:00 - More infoProduct prices and availability are accurate as of the date/time indicated and are subject to change. Any price and availability information displayed on [relevant Amazon Site(s), as applicable] at the time of purchase will apply to the purchase of this product.)