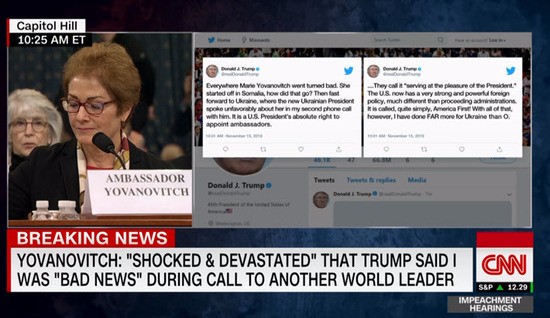 “Sideshow Amigos” and “Sideshow Shreks” still remain at large in our imagination, as the House Intel Committee deposed Ambassador Yovanovitch.

The GOP tried several procedural stunts, but lost the message as Trump tweeted an attack during the opening.

What remained were what has now become routine in terms of distractions from what is now even more obvious Arms for Dirt activity and its cover-up.

MSNBC's Chris Matthews Says Trump is 'Afraid' of Marie Yovanovitch: 'She Scared the Hell Out of Him' https://t.co/s1JgESXW4J

Marie Yovanovitch: "Ukrainians who preferred to play by the old, corrupt rules sought to remove me. What continues to amaze me is that they found Americans willing to partner with them…they succeeded in orchestrating the removal of a US Ambassador."pic.twitter.com/ea1581rx7z

Marie Yovanovitch, former U.S. ambassador to Ukraine, was recalled in the spring — amid what she described as a "concerted campaign" against her. She's testifying publicly now.

DO NOT FORGET: At 1 a.m., Marie Yovanovitch was told to get on the next plane within days of her celebrating the courage of a woman who had died after a vicious acid attack. Can you imagine the level of fear she must have felt???

Jarring anecdote by Yovanovitch that may have been overlooked: She was recalled from Kyiv—largely, she & others believe, because of her anti-corruption efforts—while in the middle of hosting an event honoring the anti-corruption activist Kateryna Handziuk. https://t.co/CQDw5Qs8Va pic.twitter.com/CxkV4PplOZ

THREAD: 1/ I’ve met few better, more capable and courageous ambassadors than Marie Yovanovitch. I got to see her in action during a 2017 trip to Ukraine (I’ve made a bunch). Here’s a a quick story from the trip, indicative of her talent.

NEW: Pete Sessions joined Giuliani and his indicted cronies in speaking out against the U.S. ambassador to Ukraine. Then he was eyed as her replacement. https://t.co/2BAggFErla

At the same time that Rudy Giuliani and his now-indicted pals were pushing for President Donald Trump to remove Amb. Marie Yovanovitch from her post in Ukraine, Trump administration officials were eyeing potential contenders to take over her job. One of the people in the mix, according to three sources familiar with the discussions, was Rep. Pete Sessions, a former Congressman who called for Yovanovitch’s firing. He is also a longtime ally of the former New York Mayor, and is believed to have taken millions of dollars from Giuliani’s indicted cronies.

Yovanovitch is set to testify to the Congressional impeachment inquiry on Nov. 15. The circumstances of her removal from Kyiv are of keen interest to investigators, and she has said the whisper campaign against her left her blindsided. Witnesses in the inquiry have said they believed the people who successfully pushed for her ouster wanted to replace her with someone more pliable — and maybe even more friendly to their business interests.

An anonymous tipster/whistleblower tells the police that there’s about to be a bank robbery at the intersection of 10th Ave & E Street. The police go to that intersection, come upon a bank robbery in progress & arrest the robber. You don’t need the tipster/WB to prove the case.

Is attempted murder a crime?

Is attempted robbery a crime?