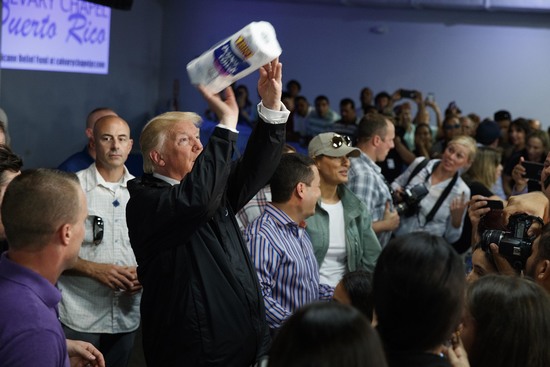 The Department of Housing and Urban Development, under Ben Carson, had a legally required deadline back in September to make desperately needed hurricane relief funding available to the suffering American island. The housing agency was supposed to issue funding notices to 18 states and territories affected by hurricanes on Sept. 4. They did so with one exception: Puerto Rico.

Donald Trump and Ben Carson are refusing to release the aid in direct opposition to the congressional mandate. HUD officials even told the House Appropriations subcomittee that they just won’t do it. Not only did HUD officials admit that they are willfully defying the law, but they also admitted that they have “no statutory authority” to miss such a deadline.

So why are they doing it? Because laws don’t matter in Trumpland, and Trump hates Puerto Rico.

Just as Trump does with California, another place he hates, where in the past two years raging wildfires have killed 87 people and burned more than 2.15 million acres. Trump is now threatening to withhold federal aid for firefighters for no other reason than his animosity towards the state and its people. The official reason Trump gives is that they wouldn’t listen to his brilliant idea of  “raking the forests,” which is along the same lines of his idea of nuking hurricanes. It’s a stupid idea from an uneducated man. Yet the real reason is hatred.

(28)
$19.99 $9.99 (as of May 18, 2022 19:21 GMT -04:00 - More infoProduct prices and availability are accurate as of the date/time indicated and are subject to change. Any price and availability information displayed on [relevant Amazon Site(s), as applicable] at the time of purchase will apply to the purchase of this product.)