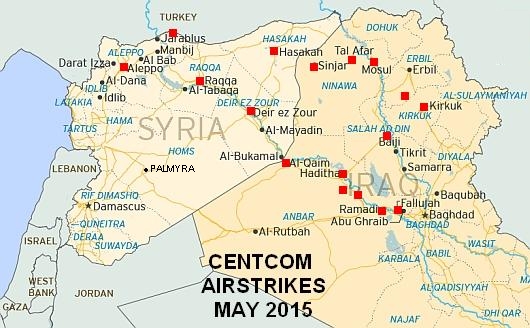 The news banners brag that U.S. Air Force spends $9,000,000 a day bombing ISIS. That's for 20 bombing attacks a day and Very Low Risk bombing missions. U.S.A.F. has never lost a plane over there.

How's about a new Group here? A profit center for Our Favorite Web Site.

Better is easy. Fact is, the major fighting units of ISIS in Syria are located in western Syria. From U.S. Department of Defense published reports, that part of Syria is not being bombed. There's word of anti-aircraft missiles there — owned by anti-ISIS units, not by ISIS — but for whatever reason that area is established as a Safe Zone for ISIS.

We can do better.

“We” meaning a newly organized, onion-chewing DKOS Air Force. Heck, guys, for considerably less than $3.85 billion a year we can lay down 100 bombs a day on ISIS (contracting the dirty work out to Russia and two of the 'Stans.) Make it impossible for ISIS to mount their “suicide chain” vehicle attacks and give the anti-Islamist, anti-terrorist locals a chance to win their part of this war.

Here's a month of what's happening. All the boom-boom for May 2015. You can see 100% of what's getting hit. Losing no planes was kinda nice, too.

Don't like internet ads? Don't want el Koso to have to worry about paying the server fees every month? Want to pay great salaries to staff?

How's about it ??? Use our political clout to privatize and get a no-compete contract to bomb the living shxt out of ISIS. THE HALIBURTON OF THE LEFT. Grab it off. Run with it.

The one and only current War on Terror military operation that erases more terrorists than it creates.

Of course, DKAF lets out the work on competitive bid. Bombing the idiots shouldn't cost more than $50,000 a hit. Huge profit margin vs. The Overhead Industry blowing ten times that much and leaving out western Syria.

How's this doing for the plot line of a graphic novel ???

Might even get a 2% Wealth Tax if it all works out. And then, below the fold…..

(22195)
$179.00 (as of May 16, 2022 23:24 GMT -04:00 - More infoProduct prices and availability are accurate as of the date/time indicated and are subject to change. Any price and availability information displayed on [relevant Amazon Site(s), as applicable] at the time of purchase will apply to the purchase of this product.)